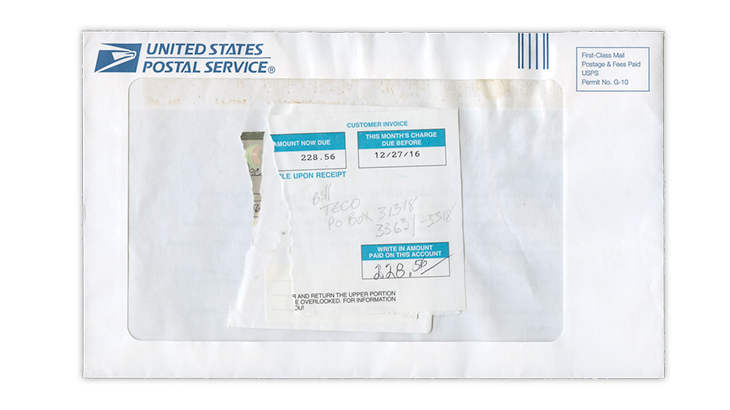 This United States Postal Service “We Care” envelope contains half of another envelope, a personal check and half of a bill to a gas company. The other half made it to the gas company, and the customer was notified that the gas company could not cash half

Late in 2016, Linn’s reader Patricia Stilwell Walker received from her local post office the United States Postal Service “We Care” window envelope shown here. It contained half an envelope with her return address, half of a gas bill and half of her check paying it. These items were described as having been “damaged in the mail.”

Naturally she wondered what happened to the other half of the envelope with half of her check and half of the bill. She needn’t have worried.

That half made it to the gas company, but of course it could not cash half a check. Shortly afterward, she received another billing from the gas company with this message: “Payment received damaged in the mail. Please reissue.” The gas company enclosed the half envelope, bill and check it had received.

If that isn’t good old American efficiency, I don’t know what is. Walker was able to reunite the two halves of the billing, the return envelope and her check.