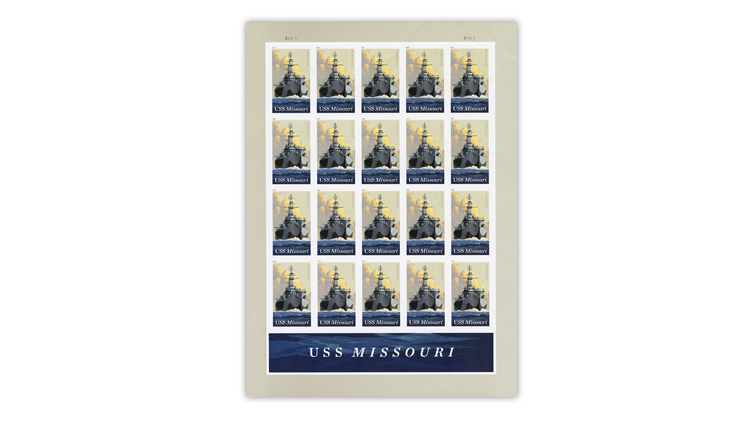 In late July, die-cutting-omitted errors of the United States USS Missouri forever stamp were discovered on two panes of 20 that were purchased from the post office at the U.S. Naval Station in Rota, Spain. On this pane, which Linn’s examined, the stamps 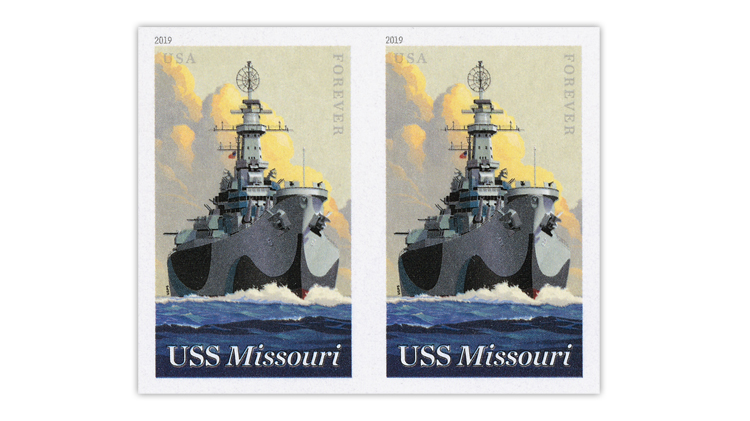 A pair of USS Missouri error stamps with the die cuts omitted, photographically cropped from the intact pane of 20 shown in the first image. The recently discovered error will be listed for the first time in Vol. 1A of the 2021 Scott Standard Postage Stam
Previous
Next

When Moore had a chance to examine the panes more closely, he discovered that two of them appeared to be without the serpentine die cuts that allow individual stamps to be removed from the liner paper.

A couple of days later, Moore telephoned Linn’s editor-in-chief Jay Bigalke to relay the news of his remarkable find.

In early August, Bigalke contacted Moore and asked him to send one of the error panes to Linn’s editorial office in Sidney, Ohio.

Moore, who describes himself as “a collector for many years,” wasted no time sending the error pane on its way.

Linn’s and Scott catalog editors carefully viewed the error pane under high magnification and determined that the stamps in the top three rows are completely without die cuts.

The five stamps in the bottom row, however, do not qualify as errors because they show traces of die cutting along the bottom margin and along one-third of the vertical margins between the stamps.

As such, these stamps would qualify as production freaks, not catalog-listable errors.

Close inspection of the back of the error pane showed normal placement of the rouletting between stamps and the serpentine die cuts behind each stamp that facilitate removal of the liner paper from an individual stamp.

In comparison to a normal pane, the rouletting on the error pane is faintly impressed into the liner paper.

All marginal markings on the back of the error pane are identical to those found on a normal pane.

The plate-position diagram on the back of the error pane shows it came from position 6 (third pane in the middle row of three panes) in a press sheet of nine panes of 20.

The error pane has several noticeable wrinkles and bends, which suggests that someone may have tried to remove one or more of the die-cutting-omitted stamps from the pane before realizing that something was amiss.

Such blemishes also may be indicative of printer’s waste — stamps that have been misprinted, misperforated or misgummed during the normal process of stamp production.

Printer’s waste is supposed to be destroyed but sometimes escapes detection and is sold through normal postal channels. Other examples of printer’s waste enter the philatelic market through carelessness or theft.

Moore’s discovery came about a month and a half after the June 11 first day of issue of the USS Missouri stamp.

What makes his find more unusual is that the two error panes originated from a military post office that sometimes doesn’t receive or maintain significant quantities of commemorative stamps.

According to Moore, the Naval Station Rota post office received an initial requisition of only 25 panes of the USS Missouri stamp.

Discovery of this new error came too late for inclusion in the 2020 Scott Specialized Catalogue of United States Stamps and Covers, which will be published in October.

The Scott editors confirmed that it will be listed in Vol. 1A of the 2021 Scott Standard Postage Stamp Catalogue, due out in April 2020.