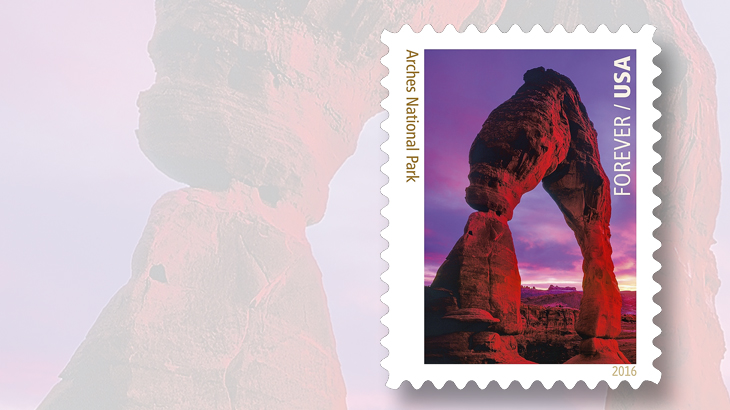 Delicate Arch in Arches National Park, on a forever stamp that will be part of the National Parks stamps set of 16 to be issued June 2.

The second stamp image revealed in the upcoming United States National Parks stamp set pictures the Delicate Arch in Arches National Park in Moab, Utah, in a photograph by Tom Till of Moab.

“Delicate Arch is just one of more than 2,000 stone arches in a park that contains the greatest density of natural arches in the world,” according to the U.S. Postal Service. “The park is a landscape of contrasting colors, landforms and textures with thousands of natural stone arches, hundreds of soaring pinnacles, massive fins and giant balanced rocks.”

The Delicate Arch was previously depicted on a 32¢ Utah Statehood Centenary stamp issued Jan. 4, 1996 (Scott 3024), with a design by McRay Magleby.

The new stamp will be issued June 2 in New York City at World Stamp Show-NY 2016, as part of a set of 16 forever stamps commemorating the 100th anniversary of the National Park Service.

The two stamps differ in size, orientation and dimensions, based on the USPS preliminary artwork.

The Acadia National Park stamp is horizontal and resembles a standard commemorative format with an approximate 1.5:1 width-to-height ratio.

The Arches National Park stamp is vertical with a width-to-height ratio of roughly 1:1.3, similar to the boxier 2014 Barnum & Bailey Circus Poster with Tiger forever stamp (Scott 4903).

The variations in shape and orientation between the two stamps suggest that the pane layout, which has not been revealed, will not be standard; it most likely will contain 16 stamps with various sizes, similar to the 2014 eight-stamp Circus set (Scott 4898-4905) or the 2013 12-stamp Modern Art in America pane (4748).