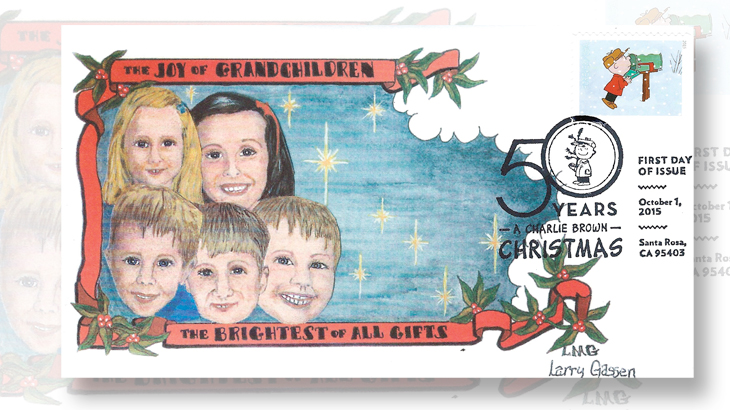 Some first-day cover collectors are perplexed, too.

There was no pictorial black-and-white postmark for the new Sarah Vaughan stamp issued March 29. It is the seventh stamp in the Music Icons commemorative series and the first without that type of postmark available.

Instead, the choices for FDC collectors are the digital color first-day postmark or the standard four-bar “First Day of Issue” (FDOI) postmark, the latter usually reserved for more pedestrian new issues.

These black cancels are called “hand cancels” by collectors (even though they are sometimes applied by a machine) and “rubber composition” cancels by the USPS (as opposed to the steel die-hub postmarks that collectors call “machine cancels”). Machine cancels are smaller, lighter, and rarely pictorial.

Not all collectors are disappointed in the lack of a pictorial for the Vaughan stamp. Some recent pictorials have been too dense, obliterating additional stamps that may be on the covers, or even parts of the new issue itself. The FDOI design, in contrast, is clean and spare.

FDC servicers should remember that there is a fourth postmark available for all issues: the circular datestamp, which is the same as the circular (dial) portion of the FDOI postmark. At about one inch in diameter, this cancellation may work better for multi-stamp FDCs or large cachets.

Some recent pictorial postmarks also have been too large. The 2015 Medal of Honor first-day postmark (May 25, Scott 4822-4823 and 4988) was a charming combination of cancel types measuring 3.96 inches by 1.97 inches. The USPS centered the postmark on the uncacheted FDCs it sold, leaving a scant 1¼ inches on each side of a standard envelope.

The pictorial postmarks also are difficult to apply by hand, especially when the canceling device is given to field personnel who may never before have canceled philatelic covers.

Not only are the cancelers hard to line up on the stamped cover (the wooden base of the rubber stamp obscures the design from the clerk wielding the device), they require firm, even pressure on both the ink pad and the cover to make a good impression.

Consider the “50 Years A Charlie Brown Christmas” (Scott 5021-5030) rubber-composition cancel, as shown here on an American First Day Cover Society Court of Honor cacheted cover by Larry Gassen. A quarter-inch farther to the left, and this cancel would have missed the stamp entirely.

Some recent pictorial cancels, such as that for the Paul Newman stamp issued Sept. 18, 2015 (Scott 5020), are nothing but black-and-white versions of the digital color postmark (and neither version of the Newman first-day postmark was particularly imaginative).

Regarding imperforate press sheets, USPS spokesman Mark Saunders told Linn’s that “Stamp Services is in the process of re-evaluating our line of stamps and philatelic products,” the same statement he has made regarding other USPS matters. The decision not to produce a pictorial first-day postmark for Vaughan may be part of that re-evaluation effort.

Hand cancels are applied for free at first-day events. By mail, the first 50 for an issue are provided at no charge, after which they are 5¢ apiece. A canceling clerk would have to process hundreds per hour to pay his or her wages.

On the other hand, most hand-canceled FDCs never go through the mail, and even their shipment to and from the canceling facility is paid otherwise. That puts Postal Service revenue per cover above at least half a dollar, and more for higher value or se-tenant issues. A strict cost accounting should take that value of the stamp or stamps into consideration.

Where the USPS might be “leaving money on the table,” as one disgruntled uncut press sheet collector put it, is in failing to recognize that single-stamp FDCs with pictorial postmarks are more attractive than those with the FDOI cancel, and that means more sales for FDC servicers, whose numbers include dealers, cachetmakers, and the U.S. Postal Service itself.

World Stamp Show-NY 2016, May 28 to June 4, will have seven U.S. new issues: one every day of the show except the final day. Some experienced first-day servicers at shows won’t rush to the cancellation booth or table on the first day a stamp is available, instead waiting until a subsequent, quieter day.

Traditionally, the first-day cancels are available every day of a show that hosts the issuance. After all, collectors have 30 days to send in their covers.

However, there was a problem at Ameristamp Expo 2016 in Atlanta in January, and the Botanical Art FDOI cancel was not available on Saturday or Sunday of the show.

During a telephone/web conference last month, cachetmaker Chris Lazaroff elicited a promise from Mary-Anne Penner, the acting director of USPS Stamp Services, that the first-day cancels at World Stamp Show-NY 2016 will be available on every subsequent day of the show.

This means, for example, that FDC collectors can have their Repeal of the Stamp Act first-day covers of May 29 serviced as late as June 4, the final day of the show, when no new issues are scheduled.