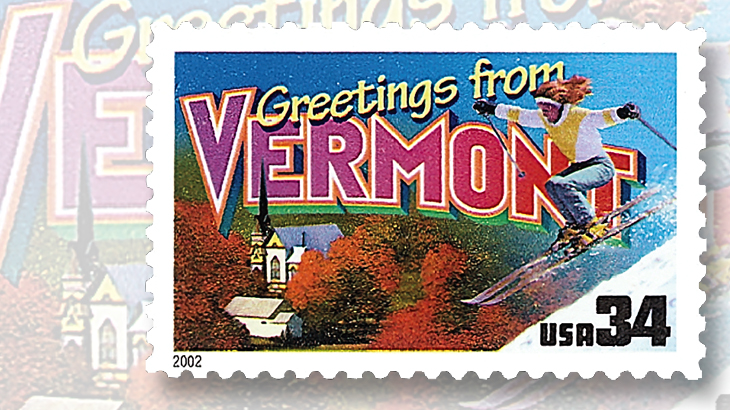 Alpine skier and 1980 Olympic competitor Viki Woodworth served as the photographic model for the figure of the skier superimposed on the “NT” of “VERMONT” on this 2002 Greetings From America stamp.

I keep track of living people shown on United States stamps and have another example to add to the list.

It is the Vermont stamp from the 2002 Greetings From America panes issued first with 34¢ and later with 37¢ denominations (Scott 3605 and 3740, respectively). Shown at upper-right on this stamp is a skier modeled from a photograph taken in New Hampshire or Utah.

An 1866 statute still on the books prohibits the placing of a portrait of a living person on “United States currency and securities.” For a long time, the U.S. Post Office Department (the predecessor  of the USPS) properly interpreted that as applying to stamps.

In more recent times, U.S. Postal Service authorities modified the interpretation to suggest that living people could be shown as long as they were not being honored. Then, several years ago, Patrick R. Donohoe, postmaster general at the time, announced that in his view the statute does not apply to stamps at all, and the field was clear to put living people on U.S. stamps in any way the Postal Service saw fit.

Some members of Congress were not thrilled with the concept, and members of the U.S. Postal Service’s board of governors also suggested that this would not be a great idea. Thus, despite the postmaster general’s public stand, to date, no U.S. stamps have been issued specifically and intentionally honoring living people.

But over the years, most recently with the Harry Potter commemorative stamps of 2013, living people have been shown on U.S. stamps more than 75 times. This can be explicit, as with the 1945 3¢ stamp commemorating the raising of the American flag on Iwo Jima (Scott 929), or the characters from the Star Wars film series on the pane of 41¢ stamps issued in 2007 (4143).

Or it can be subtle, as with many stamps that have used living people as models for figures on stamps.

In the case of the Vermont Greetings from America stamp, the skier from the photograph is former Olympian Viki (Fleckenstein) Woodworth. She was voted the top female U.S. skier in 1977 and was a member of the 1980 Olympic team that competed in Lake Placid, N.Y.

I asked her to reflect on the photograph and how it came to be used in the stamp design. Here is the story in her own words:

“When I was a ski racer, I worked with several photographers and they would usually pay me by the hour. One particular photographer, his name is David Brownell, took some pictures of me jumping off cliffs and they got used everywhere. For instance they showed up on the cover of two magazines and I didn’t get paid for either one.

“I think he just sold the photo to the stamp company. He never contacted me or told me it would happen, I just saw it! Amazing Huh?!! Photographers can be funny that way and once they have the rights to your photo they can do whatever they want. The particular image on the stamp looks exactly like a postcard that a ski area called Attitash in N.H. had with the picture of me on it. I can’t seem to find it in my boxes and boxes of photos and memorabilia but it is exactly the same.

“So the photo was from a live session at either Park City, Utah, or Attitash. I did not realize at the time that he would just use the photo various places, but I didn’t mind in the end. My opinion of the accuracy of the image is great. I did not receive any publicity at the time of the issuance of the stamp. My name is not mentioned on the stamp and I think it was just supposed to be generic. I am OK with that.”

My thanks to Henry Lukas, education director of the Spellman Museum of Stamps and Postal History, who brought this story to light after speaking with Woodworth at a museum event.

During the 35 years I have been writing on this subject for Linn’s, I have covered most of the instances of living people on U.S. stamps, and have a list that is available to Linn’s readers.