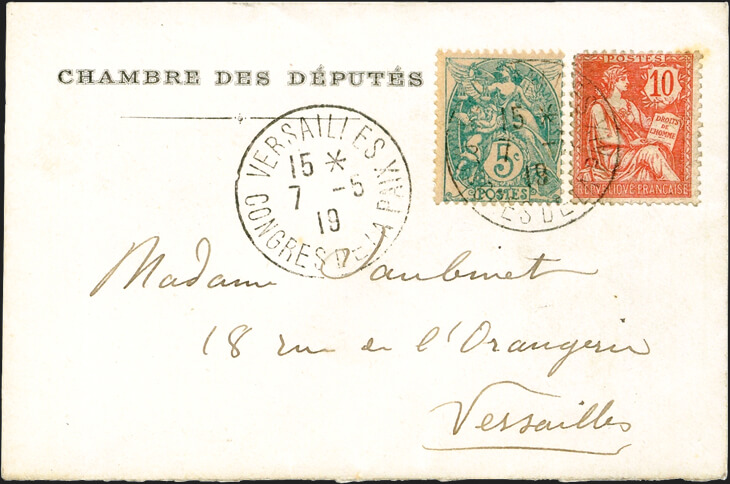 The cancellation on this May 7, 1919, French cover was struck at the Versailles Peace Congress, which imposed harsh terms in the treaty that ended the 1914-18 war with Germany. The green 5-centime Liberty, Equality, Fraternity stamp and the carmine 10c Rights of Man stamp are France Scott 113 and 116.

The Versailles Peace Congress, commemorated in the cancellation on the illustrated cover, brought together delegates from 27 nations, but the treaties imposed on defeated Germany, Austria, Hungary, and the Ottoman Empire were dictated by the so-called “Big Four” countries: France, Britain, Italy, and the United States.

Japan, the fifth victorious major belligerent in World War I, was awarded trusteeship over strategically important former German colonies in the Pacific Ocean, but otherwise enjoyed only minimal influence among the Atlantic allies.

The terms of the Versailles Treaty, signed June 28, 1919, held Germany solely to blame for the war and imposed drastically punitive reparations costs on the defeated foe. Historians today believe that the treaty created and nurtured conditions that brought the Nazi Party to power after hyperinflation and depression had impoverished Germany.

The congress also created the League of Nations, which proved incapable of keeping the peace, largely owing to the fact that isolationist politicians prevented the United States from becoming a member.

In those respects, this cover reminds us that wise victors in war are merciful, not vindictive, and that world powers must participate actively in institutions of global diplomacy as the price of avoiding catastrophic military conflict.