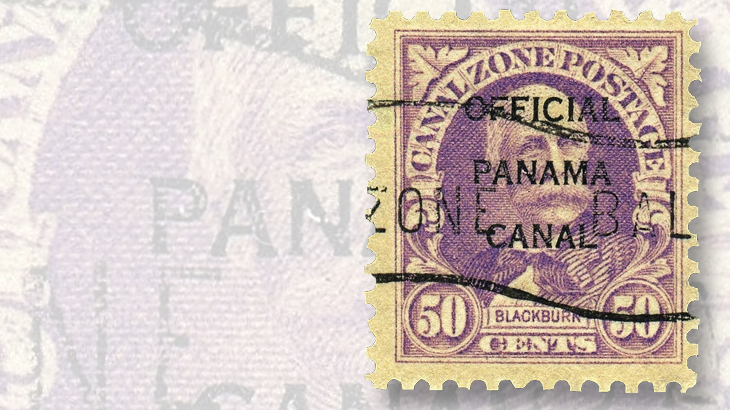 Only 1,000 of the 1941 Canal Zone 50¢ rose-lilac Joseph Clay Styles Blackburn Official stamp with Type 1a overprint (Scott O8) were issued. It is one of the key stamps to a Canal Zone collection.

On March 31, 1941, Canal Zone postal authorities issued a set of eight Official stamps produced by overprinting “Official Panama Canal” on definitive stamps of the 1928-40 series. The overprints were in two types: Type 1 in three lines, and Type 2 with “Official” on the top line and “Panama Canal” on the second line.

The main difference in the two stamps is not the color but the shorter 9-millimeter (Type 1a) overprint on Scott O8 compared with the 10mm overprint (Type 1) on Scott O7.

Only 1,000 of the rose-lilac stamps were issued. The 2017 Scott Specialized Catalogue of United States Stamps and Covers does not value the stamp in unused condition or mint condition, because it is only known used. It is valued in used condition at $550.

Although only 1,000 were issued, most of the printing probably went to collectors, so we suspect the survival rate is high. Nevertheless, it is one of the key stamps for a Canal Zone collection.