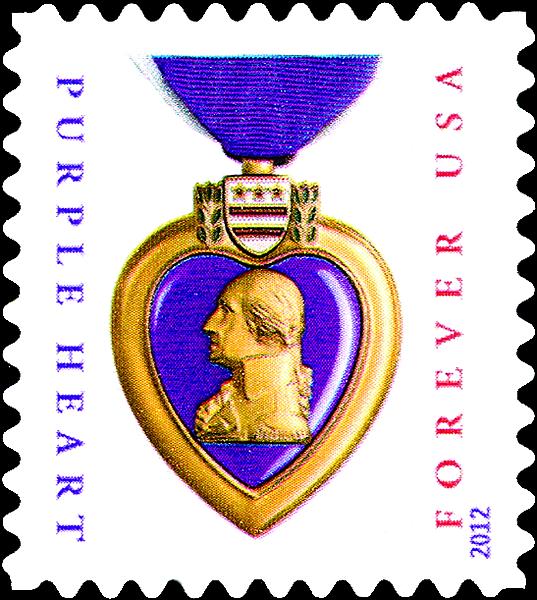 The latest version of the United States Purple Heart stamp, issued in 2012.

After U.S. Postal Service officials appeared less than enthusiastic over the order’s proposal for a stamp to honor the medal given service members injured in combat, the group persisted.

It won not only an initial 37¢ stamp in 2003 but several other versions of the stamp, including two designs denominated as forever stamps.

That same persistence paid off handsomely in late December for a postal clerk who wears the Purple Heart on his National Guard uniform.

He is Sgt. Maj. Richard Erickson, whose lawyers say he stands to get $2 million from the Postal Service over his firing in 2000 for “excessive military leave.”

In the latest in a series of rulings against the Postal Service, the Merit Systems Protection Board rejected arguments that the federal agency did not violate federal law in dismissing the Green Beret soldier from his job at a Florida mail-processing plant.

It gave the Postal Service 30 days to reinstate Erickson and 60 days to begin making back pay available to him.

The award was said to be one of the largest awarded a military reservist under a federal law that allows federal employees to take up to five years military leave and return to a civilian government job.

“While the agency was not required to hold the appellant’s job for him indefinitely, it is undisputed that the appellant’s nonexempted military absences did not exceed the 5-year limit at the time of his removal,” the board held in Erickson’s case.

Erickson, 50, told the Los Angeles Times he is not anxious to return to his postal job.

“If you fought someone for 14 years, would you want to go back?” he told the newspaper. “Are they going to fire me for something else and start another 14-year fight?”

The soldier has been on active duty at the Army Special Forces Command in Fort Bragg, N.C., while his case has been litigated.