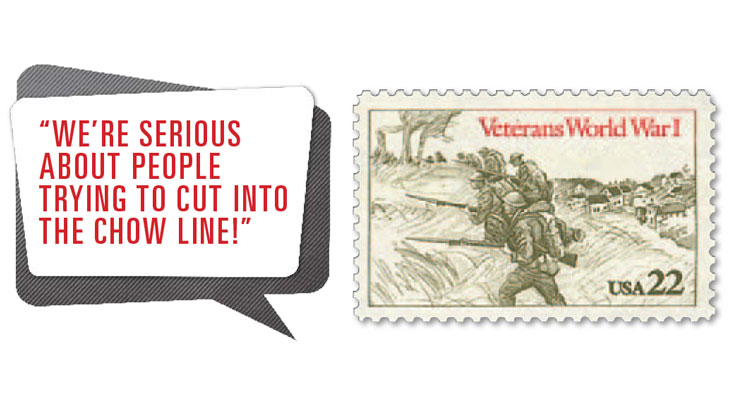 The choice of the 1985 22¢ commemorative stamp recognizing veterans of World War I (Scott 2154) for the February cartoon caption contest was not universally popular. One reader even called it “insane.”

I agree that the subject is serious, and it is a tragedy that the “war to end all wars” did nothing of the kind. Yet one of our national characteristics is the ability to see some humor in nearly every situation.

There are images I would never use for the cartoon contest. A stamp picturing a specific battle with identifiable people is one example. However, even though the design on the World War I Veterans commemorative is based on a sketch of the Battle of the Marne, it is generic, representing the trench warfare in which our soldiers engaged.

I meant no disrespect. In fact my 42 years of U.S. government service included close associations with the military, and I have the greatest respect for those who serve. It is worth noting that some of the best entries in this contest came from readers who identified themselves as former soldiers.

The most popular theme was postal rates, probably inspired by the January increase from 50¢ to 55¢ for first-class mail.

Steve Kotler of San Francisco adapted that to the WWI era: “When the general gave the order to ‘Charge’, who knew it was the Postmaster General and he was talking about postage rates!”

Multiple entries also discussed a current situation, transposing the soldiers to the southern border. A good example is “OK, men, we’re here until Congress gives Trump funding for his Wall.”

Peter Drymalski of Silver Spring, Md., represents another group of entries that suggested collecting German stamps would be facilitated by serving: “I should never have listened to that Army recruiter who told me this would be the best way to collect ‘Feldpost’ issues.”

The winner in the philatelic part of the contest, Ronald Tyson of Greenville, N.C., plays off the fact that the world’s premier stamp engraver was engaged to do the World War I Veterans stamp: “Is it really worth being shot at to be engraved by Czeslaw Slania?”

On the nonphilatelic side, the winner is William Robbins from Grand Rapids, Mich., who used a daily concern of the average soldier as his theme.

“This is nothing compared to the battle that’s going to erupt when my wife finds out I invested our life savings in an upside down airplane stamp!” by David Vikan of Dickinson, N.D.

“Now this is what I call Special Delivery!” from Deborah Rubin of Rockville, Md.

“At this pace boys, we’ll never get to the auction on time!” by Phil Mazovec Jr. of Centereach, N.Y.

The next contest will be announced in the April 8 issue of Linn’s.