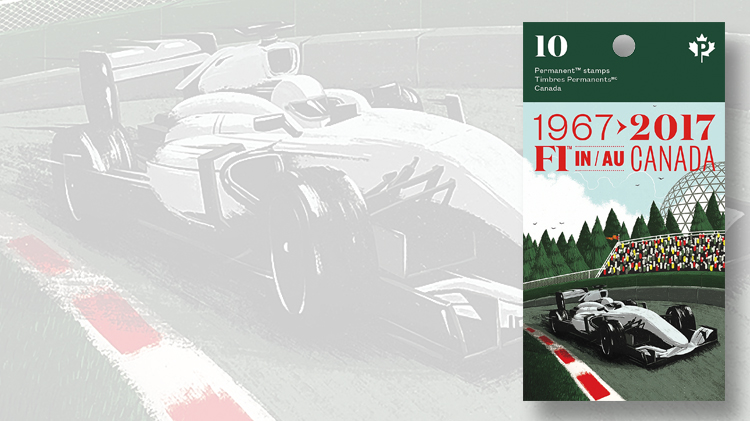 This colorful cover for the booklet of 10 stamps shows a F1 car rocketing past a grandstand, with the Montreal Biosphere looming in the background. The Canadian ecological museum is now in the geodesic dome that once housed the former United States pavili 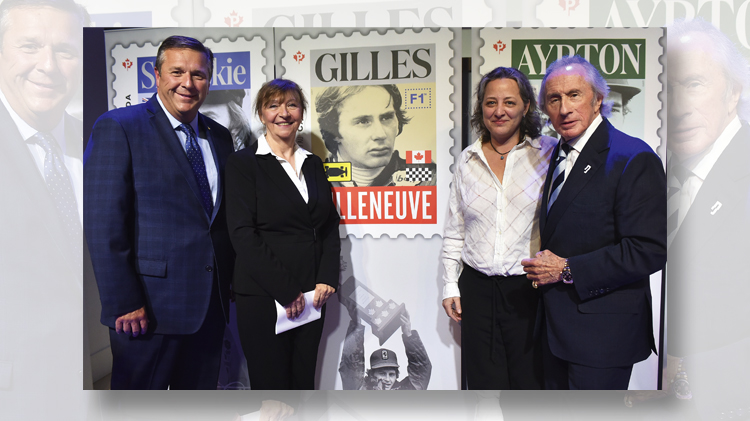 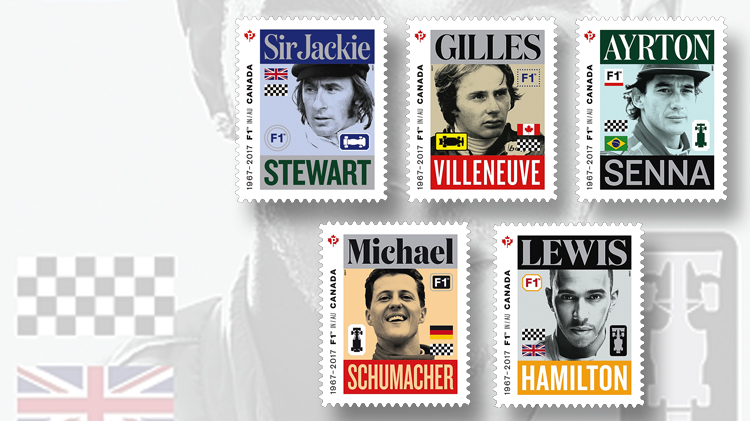 Canada issued five stamps May 16 marking the 50th anniversary of the Canadian Grand Prix. The stamps honor drivers who dominated the event in each of its five decades: Jackie Stewart of Scotland, Gilles Villeneuve of Canada, Ayrton Senna of Brazil, Michae
Previous
Next

Less than a month before the next Canadian Grand Prix on June 11, the legendary Jackie Stewart and the “first lady of the race in Canada” Joann Villeneuve revealed commemorative stamps featuring five of the most famous winners of the race May 15 in Montreal, Quebec, Canada.

The stamps were issued May 16. They mark the 50th anniversary of professional, open-wheel automotive racing in Canada, which began in the 1960s when the Canadian Grand Prix alternated races every year between Mosport Park in Ontario and Circuit Mont-Tremblant in Quebec.

The race later moved to a course on Ile Notre-Dame in Montreal. In 1982, the track was named Circuit Gilles-Ville­neuve in honor of Canada’s greatest race car driver, who died 35 years ago this month in a crash while qualifying for the Belgian Grand Prix.

Each of Canada’s new nondenominated “P” domestic letter-rate stamps features the name, likeness, and silhouette of the car of one of five drivers, each characterized by Canada Post as representing a decade of the 50-year history of this race in Canada. The five are Jackie Stewart of Scotland, Gilles Villeneuve of Canada, Ayrton Senna from Brazil, Michael Schumacher of Germany, and England’s Lewis Hamilton.

Collectively, this quintet has won 220 Grand Prix victories (including 17 in Canada), 216 pole positions (which go to drivers who post the fastest qualifying times), 399 appearances as one of the top three finishers on the podium, and 16 World Championships.

Hamilton, who is still racing, has won five and hopes to make it six at the 38th Grand Prix on June 11.

Villeneuve recorded his first Grand Prix victory at the Montreal track that now bears his name and remains the only Canadian to win a Formula One race in Canada.

At the May 15 ceremony, about 150 guests watched Joann Villeneuve unveil a stamp of her late husband before Stewart unveiled his stamp in the new set.

In its press release announcing the stamps, Canada Post described Stewart as “the man to beat in the first decade of the Canadian Grand Prix.” In his career from 1965 to 1973, he won 27 races and three World Championships.

Stewart raced in Canada’s first Formula One race at Mosport in 1967, where he also had the last race of his career in 1973. He was knighted in 2001.

May 15 coverage of the unveiling by the Montreal Gazette offered an entertaining insight from Stewart. Sports reporter Pat Hickey wrote: “Stewart, who has had a love affair with Canada since he visited with his mother as a 14-year-old, said he was honoured to have his face on a Canadian stamp.

“ ‘Great Britain did one for me but it’s not nearly as nice as this one,’ ” said Stewart.

Representing the second decade of the Canadian Grand Prix, Villeneuve raced for McLaren and Ferrari from 1977 to 1982, winning six races in a career lasting little more than four seasons.

In 1978, he won the inaugural Grand Prix race on Ile Notre-Dame, about an hour from where he grew up in Berthierville, Quebec.

Killed in a crash at age 32 on May 8, 1982, Villeneuve was among the first inducted to the Canadian Motorsports Hall of Fame in 1993.

Senna, who represents the third decade of Canadian Grand Prix, dominated the field from the mid-1980s until his fatal accident in Italy in 1994, aged 34.

The determined and talented Brazilian driver logged 41 wins and three World Championships in his 161 starts.

Few drivers compare to Hamilton, who represents the fifth decade. He won four races in his rookie season in 2007 and finished on the podium in the first nine races of his continuing career.

In 193 starts, this three-time Formula One World Champion has recorded 55 wins and has finished in the top five in points in each of his 10 years. Hamilton won the World Championship in 2008 and back-to-back titles in 2014 and 2015.

The booklet cover depicts a car rocketing past a grandstand, with the Montreal Biosphere looming in the background, a Canadian museum in the geodesic dome that housed the former United States pavilion for Montreal’s 1967 World Fair, Expo 67.

Canada Post’s official first-day covers are each canceled in Montreal with a pictorial datestamp patterned after the wheel of a different Formula One car, and are available as a set of five with a commemorative folder (414042131) and individually.

Canada’s stamps and stamp products also are available from many new-issue stamp dealers, and from Canada Posts agent in the United States: Interpost, Box 420, Hewlett, NY 11557.