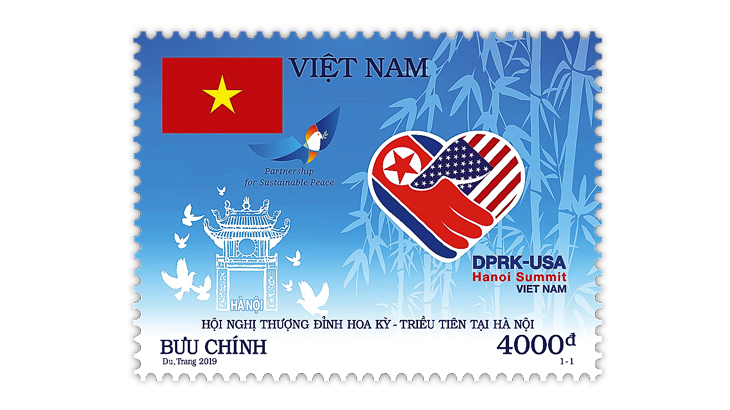 The design of this 4,000-dong commemorative includes several symbolic images. Most prominent are the Vietnamese flag in the upper left, the colorful peace dove below the flag, and the heart-shaped handshake of the flags of North Korea and the United States.

The stamp also depicts other images related to Vietnam. A bamboo forest is illustrated on the right; and Khue Van Cac, a pavilion in the Temple of Literature selected as the symbol of Hanoi in 2012, on the right.

“Partnership for Sustainable Peace” is inscribed under the colorful peace dove, and “DPRK-USA Hanoi Summit Vietnam” is in the lower right.

The stamp was designed by Nguyen Du and To Minh Trang of Vietnam Post and issued in a pane of eight. The selvage includes the English-language inscriptions that are on the stamp, as well as a lotus symbol.

An article by An Thu on the website of the Vietnam Investment Review (www.vir.com.vn) reported that Vietnam Post Corp. is planning to print 2 million stamps, but only 800,000 were completed by the issue date. All 800,000 were sold out on Feb. 27, according to the report.

The remaining stamps are still scheduled to be printed and released as they become available.

The article also quoted Ngo Hoai Thanh, head of Vietnam Post’s stamps department, as saying that the stamp was prepared in record time: only five days “from design, printing to release.”