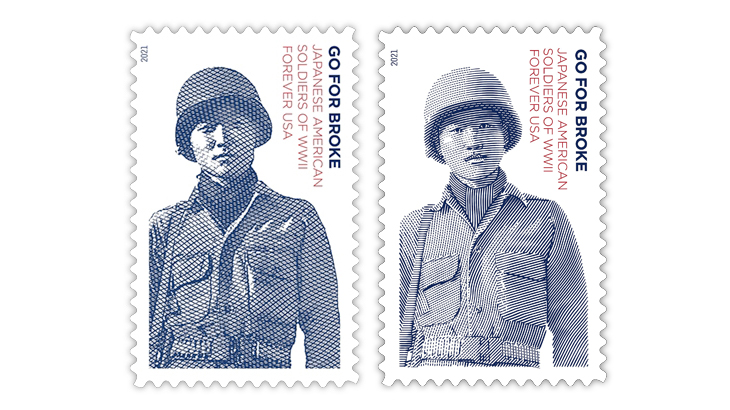 The preliminary image of the United States Go For Broke: Japanese American Soldiers of WWII commemorative stamp on the left, first revealed in late 2020, is noticeably different from the design image at right that was published in the May 6 Postal Bulleti

A newly revealed image of the United States Go For Broke stamp is different from preliminary artwork of the stamp previously published.

On June 3 the United States Postal Service is issuing a single commemorative forever stamp to honor the service of Japanese American soldiers in World War II.

Linn’s Stamp News’ coverage of the new stamp, titled Go For Broke: Japanese American Soldiers of WWII, appeared on page 1 of the May 24 issue.

This stamp image illustrating that article, pictured here at left, was also shown on page 1 of Linn’s Dec. 7, 2020, issue that announced details of the 2021 U.S. stamp program.

Illustrated here at right is the new image of the Go For Broke stamp design that was published in the May 6 issue of the Postal Bulletin, a biweekly USPS publication that provides news to the agency’s employees.

Linn’s learned May 13 that this more recent image shows the design as it is to appear on the issued stamp, which was printed on an intaglio press using a process similar to traditional line engraving.

There do not appear to be any differences in the style and size of the typeface between the two designs.

Linn’s contacted Postal Service spokesman David Coleman, who said that “the stamp art was recently updated with the current image.”

“The changes are slight and were made to improve the intaglio image,” Coleman said.

“Once a photo was identified and legally cleared the art director created an image to design the stamp,” Gicker explained. “That original image was a placeholder image to approximate what the final engraved image would look like.”

“When the project was turned over to the stamp printer their engraver used the source photo to create an actual engraved rendering.

“This process developed over time and required testing the ink on paper to ensure the intaglio printing process was producing the best image possible. There were a number of iterations of the image until we arrived at what worked best when ink hit paper,” Gicker said.

Gicker stated that “a couple of different digital versions” were used as the design of the Go For Broke stamp evolved. Gicker said this was done in an effort “to show the most up-to-date image of stamps publicly.”

“Until the stamp is actually printed we cannot know what a design will look like in exact detail,” he said.