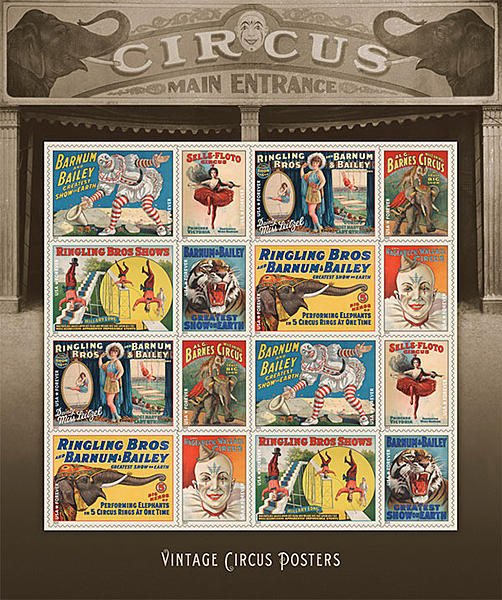 Eight United States nondenominated (49¢) Vintage Circus Posters commemorative forever stamps will be issued May 5 in a pane of 16.

The “Greatest Show on Earth” — revealed!

Eight United States nondenominated (49¢) Vintage Circus Posters commemorative forever stamps will debut May 5 in Sarasota, Fla. The stamps will be issued in a pane of 16 with the eight designs repeated twice on the pane.

U.S. Postal Service officials announced the stamp subject in March but have not formally revealed the image.

Clowns are shown on two of the stamps. An elephant is prominently featured on two stamps, including one with a tiger riding on its back. A second tiger is depicted on a stamp of its own, and acrobats and performers appear on the remaining three stamps.

The stamps are printed in two different large sizes alternating on the pane.

The pane selvage uses an image of the entrance to a circus taken by noted circus photographer Edward J. Kelty in 1937.