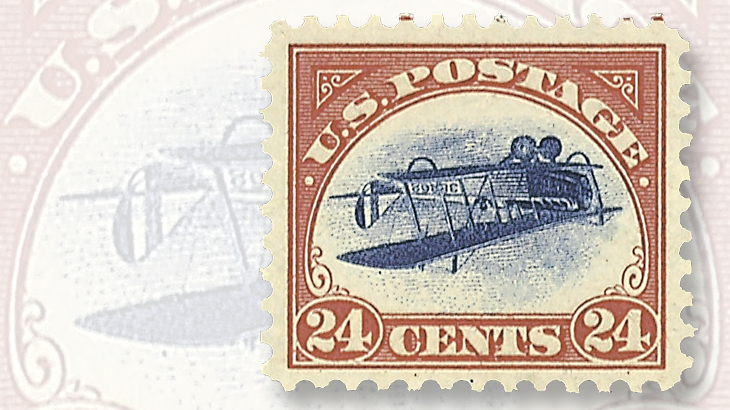 This United States Inverted Jenny error stamp, the highest-graded example to date, will be auctioned at World Stamp Show-NY 2016 by Robert A. Siegel Auction Galleries. An example of the Curtiss JN-4H shown on the stamp will be on display at the show. 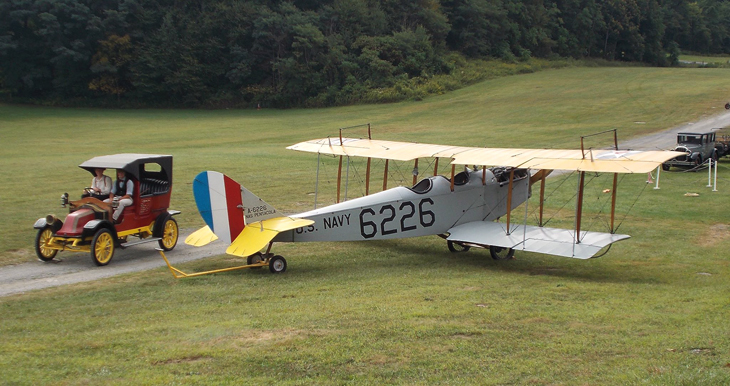 This restored Curtiss JN-4H biplane, owned by the Old Rhinebeck Aerodrome in Dutchess County, N.Y., will go on display at World Stamp Show-NY 2016. The display of the Jenny is being made possible through a generous financial donation from Robert A. Siegel 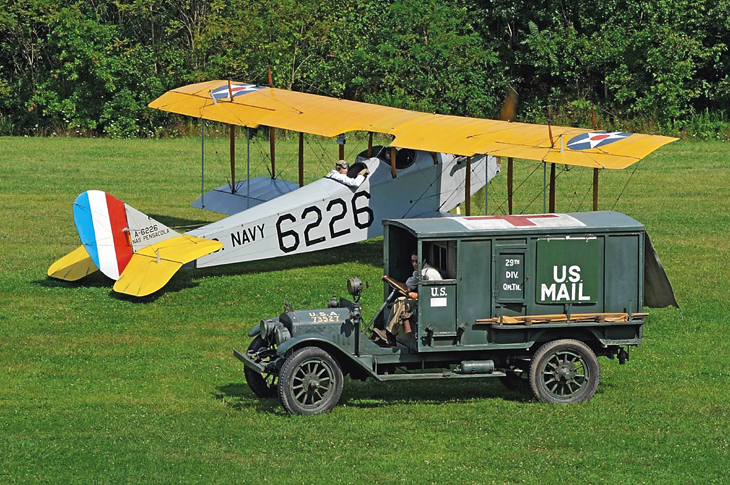 A vintage U.S. mail truck is shown next to the Old Rhinebeck Aerodrome's restored Curtiss JN-4H biplane. The mail truck is part of a mail-delivery re-enactment the aerodrome does as part of its weekend air shows. Image ©PhilipMakanna/GHOSTS. 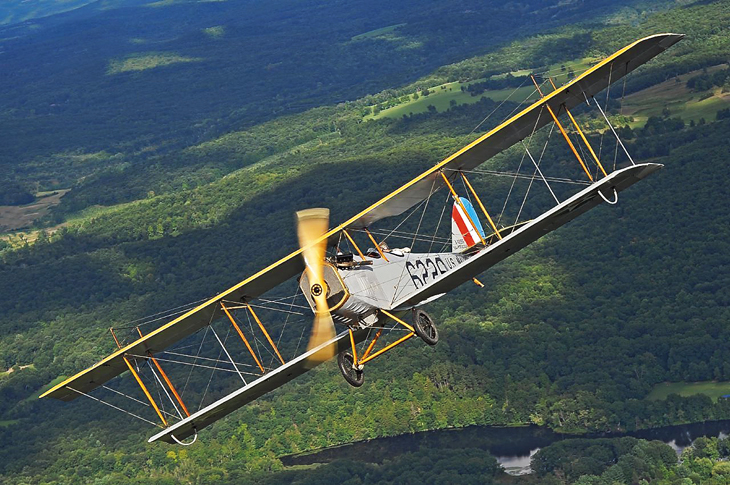 One of the most storied aircraft in history — or at least, in philatelic history — will make a surprise appearance at World Stamp Show­–NY 2016, offering visitors an unprecedented opportunity to see in person the plane from the most famous U.S. stamp of all time, the Inverted Jenny.

The restored, hundred-year-old Curtiss JN-4H biplane, which on most summer weekends flies in vintage-aircraft shows at Old Rhinebeck Aerodrome in Dutchess County, N.Y., is being brought to the Javits Center in Manhattan for the eight days of the once-a-decade international stamp show, from May 28 to June 4.

The display of the Jenny, as the JN plane has been affectionately nicknamed since its days as a World War I trainer and pioneering mail plane, is being made possible through a generous financial donation from Robert A. Siegel Auction Galleries of New York, as well as the show’s organizers.

Visitors will be able to admire the plane at relatively close quarters — though not touch it — in a special display area next to the show’s registration desk, in the airy atrium of the Javits convention hall dubbed the “Crystal Palace.”

The plane will also be united — perhaps for the first time — with one of the inverted-center stamps that secured its place in philatelic lore. Siegel has announced it is offering the highest-graded example to date from the original sheet of 100 on May 31, in an auction at the show.

The story of how the Jenny came to serve not only as the fulcrum of the nascent U.S. airmail service but also the centerpiece of one of America’s most famous stamps is ensconced in philatelic legend.

Though the actual Jenny used as a model for engraving America’s first airmail stamps has been lost, the one from Rhinebeck is nearly identical to the one depicted on the stamps.

Scott Trepel, president of Siegel Auction Galleries, traveled last fall with another World Stamp Show organizing committee member to Rhinebeck, about two hours north of New York City, to negotiate the terms of the plane’s loan to the stamp show.

At their meeting, Clay Hammond, one of the aerodrome’s board members and himself pilot and a sometime stamp collector, jokingly asked if the intention was to hang the plane upside down from the ceiling.

Ken Cassens, the mechanic and pilot who maintains and flies the Rhinebeck aerodrome’s Jenny, demurred, saying that the structure of the aircraft would be seriously damaged by the stresses of such an inversion.

Transporting the plane to New York City will involve partially dismantling it and hauling it in a pair of trailers. The century-old craft is not high-tech: its wings can be removed and reattached relatively easily.

Asked what precautions were needed to ensure that the plane could be reassembled without hiccups in time for the show’s opening on Saturday morning, May 28, Mr. Hammond dismissed any worries.

“We’ve taken this plane apart before,” he said. “If we’re missing anything, we’ll just go to the hardware store.”

Thousands of JN-model planes, in several variants, were manufactured for the U.S. army by the Curtiss Aeroplane and Motor Company of Hammondsport, N.Y., east of Buffalo, in 1916 and 1917. They were so successful that they were adopted by the militaries of several countries, including Britain, Canada, Argentina, Brazil, Cuba, and China.

The prevalence of this trusty, inexpensive piece of flying equipment at the close of World War I helped launch the civil aviation industry. The United States Post Office Department had already observed with keen interest the pioneer flights of the 1910s, and decided to buy surplus Jennys for its fledgling scheduled airmail service.

This was kicked off with much haste and fanfare on the morning of May 15, 1918, when two Jennys took off from Washington and New York, flying toward each other.

(At least that was the plan. The pilot who left Washington quickly became disoriented and flew south by mistake, crash landing in a field. He took the mail to a nearby train station and sent it back to Washington.)

Each of the two-seater planes carried a mail bag in the front with a pilot in the rear. Most of the letters were franked with the brand new, bicolored 24¢ stamp (Scott C3) hurriedly issued for the event. The stamp paid an all-in 24¢ per ounce rate established by Congress especially for the new service. The rate encompassed postage as well as special delivery service.

As rates for the air service dropped rapidly during the rest of 1918, the same design reappeared in a monochrome green 16¢ version (Scott C2) and an orange 6¢ (C1).

The 24¢ was printed in a patriotic red-and-blue combination that involved each sheet passing twice through the hand-fed, flat-plate presses at the Bureau of Engraving and Printing: once for the vignettes and once for the frames.

Perhaps inevitably, given the stamps’ hasty preparation, a small number of the 100-subject sheets got turned around between the two steps, and the little blue biplanes ended up inverted in relation to their red frames.

Just one of these error sheets ever reached the public. It was bought over a post office counter in Washington, D.C., on May 14 by a young stockbroker named William T. Robey, who had predicted to a friend that the new bicolor stamps might appear, like the Pan-American series of 1901 and the bicolor 1869 issue before them, with inverted centers.

Robey later recalled that his heart skipped a beat when the post office clerk handed him the sheet of errors in exchange for his $24.

He quickly cashed in with a Philadelphia stamp dealer named Eugene Klein, who wrote Robey a check a few days later for $15,000 — in those days, a princely sum that enabled Robey to buy a new house.

Klein, for his part, immediately resold the sheet for $20,000 to the famous collector Edward H.R. Green, who instructed Klein to break it up into singles and blocks for resale. Fortunately, Klein had the foresight to first number each stamp in pencil on the back, so that future generations of collectors could readily identify each invert by its position in the original sheet.

Scott Trepel, the president of Siegel, says he has handled more examples of the Inverted Jenny than anyone else in business today.

“Examples from the original discovery sheet of one hundred have been sold, stolen, lost, found, traded, donated, hidden, televised, locketed, faked, given away and fought over more than any other stamp in philately,” he wrote in a recent newsletter.

"Some people track golf scores. I track Inverted Jennys. I have personally auctioned 54 of the 100 positions in the sheet, including the 24 in all six blocks.

“Add to those transactions another dozen times I have sold the same position more than once, and I have held the gavel on about 50 Inverted Jenny auction lots. If I live long enough, I might just complete my bingo card and sell every available position.”

In the newsletter, Mr. Trepel also recalls the story of an Inverted Jenny once getting sucked up in a vacuum cleaner. The unfortunate accident happened to Robert Zoellner, who later bought a replacement C3a: position 58, the eighth stamp from the sixth row of the original sheet.

That position-58 stamp will be offered by Siegel during World Stamp Show–NY 2016.

Graded extremely fine-superb 95 by the Professional Stamp Experts firm, position 58 is considered perhaps the finest of a breed that sadly includes many damaged and off-center examples. Its last sale by Siegel, in 2005, was for a then-record $577,500.

The unique Inverted Jenny plate-number block, which shows the blue plate number “8493” inverted in the bottom selvage (the red number was trimmed off at the B.E.P. before issuing), was sold by the Siegel firm in 2005 for $2.97 million, smashing its 1989 record of $1.1 million.

It was bought by financier and philatelic benefactor William H. Gross, who later swapped it to Donald Sundman of Mystic Stamp Company in Camden, N.Y., for the 1867 1¢ Z-grill (Scott 85A), a nearly unique stamp Gross needed to become the first and only person in modern times to complete a collection of classic-era U.S. stamps.

Mystic proudly showed off the Inverted Jenny plate block in its marketing materials for several years before selling it in 2014 to an anonymous buyer for “north of $4.8 million.”

That buyer later turned out to be Stuart Weitzman, the famous shoe designer who is also the current owner of the unique British Guiana 1¢ Magenta, which will be exhibited at World Stamp Show–NY 2016 through Friday, June 3, on a loan from the National Postal Museum.

The Jenny made another appearance on a 1968 10¢ airmail stamp (Scott C74) commemorating the 50th anniversary of U.S. airmail service.

Besides U.S. stamps, the Jenny is featured on an early set of Colombian airmail stamps that were produced in 1920 by overprinting color lithographed promotional labels from the Curtiss Aeroplane Co. with the text “Compañia Colombiana de Navegacion Aerea” and a value of 10 centavos (Scott C2-10).

The Republic of China issued a set of five engraved bicolor airmail stamps in 1921 showing a Jenny flying over the Great Wall (Scott C1-5). The set was redrawn and reissued in 1929 with a Nationalist sun emblem on the plane’s tail, replacing the earlier stripes (C6-10).

“At World Stamp Show I will fulfill a lifelong dream of introducing an Inverted Jenny to the Jenny airplane,” said Trepel.

“After that, my ambition is to fly in the Jenny carrying one of the stamps.”