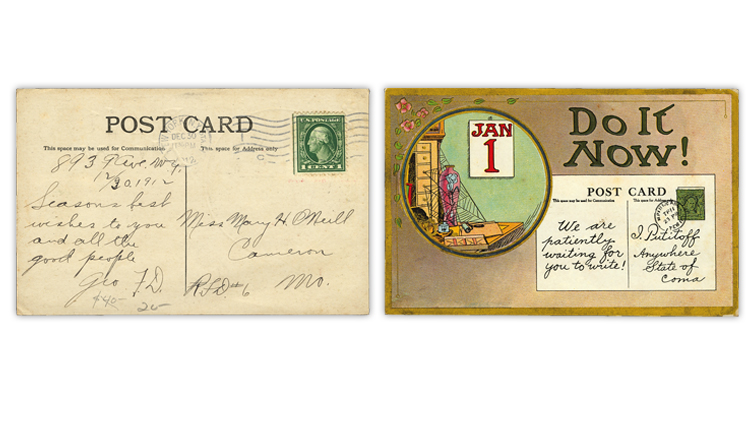 This postcard was mailed Dec. 30, 1912, from New York City to Missouri. The picture side depicts a desk covered with cobwebs and a likeness of a postcard with the message “We are patiently waiting for you to write!” 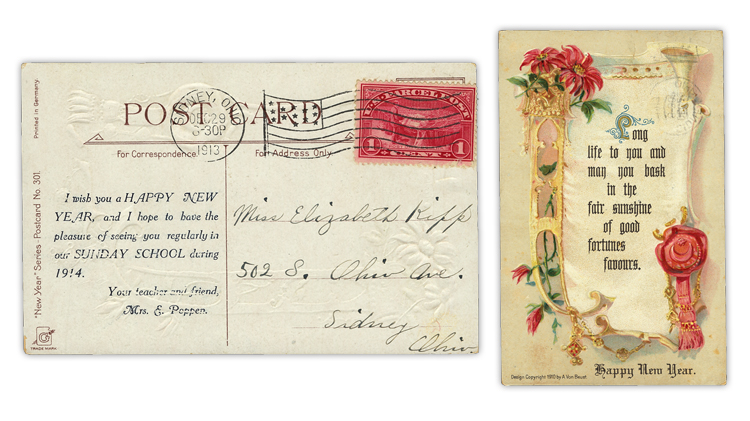 This Sidney, Ohio, postcard mailed Dec. 29, 1913, is franked with a 1¢ parcel post stamp, which was a legal use at that time. The card bears a printed message from a Sunday School teacher to one of her class members.
Previous
Next

There is no shortage of Christmas greetings to be found by collectors — both in the form of mailed cards and, especially in the first 30 years of the 20th century, in the form of postcards. New Year’s greetings are much harder to find.

Two New Year’s postcards have come to hand recently, and they deserve to be shared.

The first example, pictured in the first illustration here, was sent from New York City to Cameron, Mo., canceled Dec. 30, 1912.

The address side of this postcard is run-of-the-mill, but the front is special. The cobweb-covered desk in the illustration on the left with the prominent “JAN 1” date is probably meant to evoke the tradition of New Year’s resolutions.

An illustration of a postcard is featured in the center of the front side under the message “DO IT NOW!” This postcard likeness includes a tiny, but recognizable, image of a 1¢ Benjamin Franklin stamp from the 1902-03 Second Bureau Issue.

The message is not subtle: “We are patiently waiting for you to write!” The address is “I. Putitoff, Anywhere, State of Coma.” Would you be offended to receive such a reminder?

The New Year’s postcard pictured in the second illustration has a standard front with a short message: “Long life to you and may you bask in the fair sunshine or good fortunes favours. Happy New Year.”

On this postcard it is the address side that deserves to be spotlighted. It was sent within Sidney, Ohio, on Dec. 29, 1913, franked with a 1¢ parcel post stamp (Scott Q1). This raises the question: What is a parcel post stamp doing on a postcard?

When parcel post stamps were first sold in post offices in late 1912 and early 1913, the only allowable use was on parcel post packages. Regular postage stamps were henceforth not permitted on such packages. This turned out to be difficult to enforce, so the postmaster general changed the rules effective July 1, 1913. From that date, both types of stamps could be used interchangeably for parcel post or regular mail. Thus the December 1913 use on the illustrated card is proper.

The printed message on the address side of the card reads, “I wish you a HAPPY NEW YEAR, and I hope to have the pleasure of seeing you regularly in our SUNDAY SCHOOL during 1914. Your teacher and friend, Mrs. E. Poppen.”

Printed messages on the address side of postcards are unusual in this period, so it was a nice find.