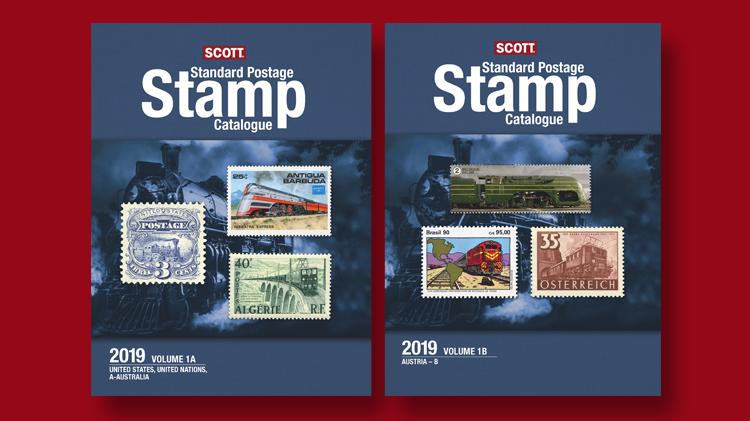 Volumes 1A (United States, United Nations, countries of the world A through Australia) and 1B (countries Austria through B) of the 2019 Scott Standard Postage Stamp Catalogue are now available for purchase.

The discovery of a trunk of modern Official Mail envelopes has caused many values for used examples to drop for envelopes from Scott UO73 to UO93.

In Canal Zone, two unused air post Official stamps, Scott CO9 and CO12, are valued for the first time. Previously, only CO11 from this set was valued unused. The new values for unused examples are $1,100 each for CO9 and CO12.

Among the other countries listed in Vol. 1A, Afghanistan presented some challenges, primarily because of widely variable prices and rather thin dealer stocks. Even so, slightly more than 300 values were changed. Among these were values for imperforate varieties described in footnotes.

After several years of softening market prices, it should come as no surprise that the vast majority of the more than 1,800 value changes in Antigua recorded this year are declines of 10 percent to 20 percent. These drops are seen for stamps issued from the mid-1930s to the late 1990s. From about 2000 to the present, values are steady, with scattered increases seen for some of the more popular flora and fauna topical subjects.

More than 1,000 value changes are recorded for the small South Atlantic island of Ascension. A handful of increases for classic-period issues are followed by declines almost across the board. Some increases are seen for used stamps, particularly for souvenir sheets issued during the 1970s. The 1996 16-stamp set depicting birds and their young (Scott 640-655) advances from $37.10 used in the 2018 catalog to $45.25 this year

The classic period of Australia received a thorough review, resulting in almost 500 value changes with many declines. The 1908 10-shilling emerald and the 20sh emerald postage due stamps (Scott J37 and J38, respectively) are now valued used, with a value of $27,500 for the 10sh and $52,500 for the 20sh. The values are in italics to indicate that these stamps can be a challenge to value accurately.

Many clarifications and other enhancements have been made to the Computer Vended Postage section. The editors continue to work through the complexities of these computer-generated stamps.

In Confederate States of America, new listings appear for the postmaster’s provisionals of Patterson, N.C. Scott 149XU1 and 149XU2 are the rare 5¢ and 10¢ black provisionals with control mark, the former known only unused and the latter only used.

Collectors of Aden, a British colony and protectorate in southern Arabia, will be pleased to see the addition of values for several sets in hinged condition, where stamps in such sets are valued in mint never-hinged condition. These new hinged set totals will assist collectors who are seeking stamps on a more limited budget.

The roughly 400 value changes for the Bahamas continues the pattern Scott editors have seen for other British Commonwealth countries for the past five years or so. A modest number of increases are seen in the classic period up to the 1935 Silver Jubilee issue. The biggest jumps are seen for used stamps. As an example, the 1-shilling 1898 Queen Victoria (Scott 23) jumps from $37.50 used in 2018 to $50 in 2019.

Almost 850 value changes are recorded for Bahrain. Declines are the norm for stamps issued from 1970 up to 2005, while values for stamps issued from 2005 to 2010 trend upward. Among the more robust increases is the 2005 sheet of six celebrating the 50th anniversary of the discovery of Dilmon civilization artifacts, which advances from $7.50 mint and used in 2018 to $12 both ways this year.

For the stamps of Belize, the editors made more than 1,300 value changes. Values decline for many stamps issued up to 2005. Among the more recent issues, values are up or are provided for the first time for surcharged stamps. A notable example is the 1980 10¢-on-35¢ with round obliterator (Scott 424Ab), with an initial value of $300.

More than 700 value changes are recorded for Bermuda. Scattered upward adjustments characterize the classic issues through the mid-1930s. For stamps issued through the mid-1990s, numerous stamps show increases in used condition. Keep in mind that these values are for stamps with contemporaneous cancellations, not canceled-to-order stamps.

Values for unused stamps from the 1940s through about 2003 are down, albeit modestly. Decreases on the order of 10 percent or less are the norm. Stamps issued during the past decade or so are up about 10 percent to 20 percent. Larger jumps are typically seen for popular topical subjects. For example, the 2012 set of six Paintings stamps (Scott 1047-1052) advances from $12 mint and used last year to $13.50 both ways this year.

A thorough review of Brazil this year generated more than 4,500 value changes. Numerous value changes were made for stamps issued from 1900 to 1940, resulting in a mix of increases and decreases. Values slide downward from 1940 through the 1990s, but increases in value are the norm among the back-of-the-book listings.

If you collect the British Indian Ocean Territory, be sure to review the higher values for stamps issued during 2006-10. Decreases are seen across the board for the remaining 300 or so value changes.

As with many other countries, popular topicals see some gains. The 2004 Butterflies set of four with gauge 14 by 13½ perforations (Scott 4291a-4294a) floats up to $30 mint and used, from $28 both ways last year. Be sure to look at items that are footnoted because many values have been added or updated.

Burkina Faso, formerly known as Upper Volta, tested the editors’ analysis because retail market prices often varied substantially. Of the more than 1,300 value changes, scattered declines outpaced gains for stamps issued during the 1960s to the mid-1980s, with sharper drops seen for stamps issued during 1984-87. Values are added for the first time for numerous stamps from the mid-1990s through 2008. The 1996-98 Handicrafts set of 10, with mint and used values dashed previously, is now valued at $60 mint and at $15 used. Be sure to review the semipostal and airmail listings, which also see myriad value changes.

A review of Burma yielded slightly more than 300 value changes. Stocks of issues from the 1950s to 1990 are scarce, which drove up values for many of these stamps.

Editorial Enhancements for Vol. 1B

Bahrain’s Flag, Map, and Sheik Isa definitive set (Scott 225-240) has been expanded, with new minor-number listings for perforation varieties. Some of these stamps are readily identifiable by the bold printer’s imprint in the bottom margin.

A new design type has been added to the 1991 set of eight and souvenir sheet honoring the 30th anniversary of the coronation of Sheik Isa (Scott 373-380 and 381).

It has been determined that two stamps previously listed as war tax stamps are in fact postal tax stamps. The relevant Scott numbers have been changed from MR1-MR2 to RA1-RA2.

Among the Bhutan listings, numerous editorial notes and footnotes have been added or updated. Two new 2005 surcharges on 1979 Antiques stamps appear for the first time as Scott 1409A-1409B. Both are valued at $35 in used condition.