Volumes 6A and 6B of 2019 Scott Standard catalogs available 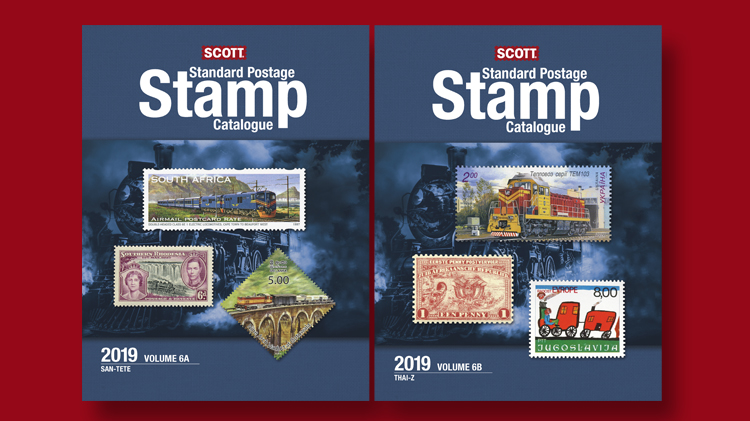 Serbia received a close inspection from the editors this year, which resulted in slightly more than 1,000 value changes. Mostly increases are seen among the classic-era issues. The 1872 1-para yellow Prince Milan (Scott 25) rises in used condition from $24 to $32.50. Modern issues see a mix of modest increases and decreases. This year, the real action is in the Austrian and German occupation issues, almost all of which rise substantially in value. These gains are especially robust for stamps in unused and mint never-hinged condition. Representative of these positive trends is the 1941 first set of German occupation stamps (2N1-2N15), which jumps from $72.50 mint to $135.

Slightly more than 700 value changes were recorded for Slovakia. Values for most of the 1939 issues (Scott 2-25) were lowered because the previous values were for never-hinged examples, whereas Scott values these stamps in unused hinged condition. Where appropriate, values for never-hinged stamps have been added to these listings. In the modern listings, values rise modestly, with a few issues showing more robust gains. The 2004 60-koruna stamp marking Slovakia’s admission into NATO marches from $5 mint and $2.50 used in the 2018 catalog to $6.25 and $4, respectively, this year. Collectors of used stamps will be pleased to see jumps in value for many stamps issued during the past 10 years or so. In the postage due section, seven of the 12 stamps in the 1939 first issue rise in value in used condition.

The stamps of the sheikdom of Sharjah and Dependencies, located in Oman Peninsula in the Persian Gulf, received a thorough review, resulting in decreases in value for many sets. Sharjah joined the United Arab Emirates in 1971.

Early airmail issues of Syria increase in value this year. The first airmail set (Scott C1-C3) rises from $875 unused to $925. The used value for the set remains at $165.

More than 40 value changes occur among the listings of Thailand semipostal stamps. Most reflect decreases.

Editorial enhancements for Vol. 6A

Slovakia: A handful of new imperforate varieties among the early republic issues are listed for the first time as Scott 39a, 43c, 44a, 46a, 48a and 83a. If you are a collector of mushroom topicals, take note of the listing for the 1997 Mushrooms souvenir sheet of three, which has been changed from Scott 283a to 283. The three stamps in this sheet were issued only in that form. This necessitated changing the listing for former Nos. 281-283 to reflect the sheet as the major listing; the three stamps formerly listed as Nos. 281-283 are now listed as minors, Nos. 283a-283c.

Sierra Leone: New images have been added for surcharged or overprinted issues of this African nation.

Among the somewhat more than 130 value changes for Turkmenistan, those for the 2001 souvenir sheets for the 10th anniversary of independence (Scott 79-85) are up — substantially. In 2018, the set of seven six-stamp sheets was valued at $61 mint and used. This year, the set rockets up to $500 both ways. Very few dealers have these sheets in stock, and prices are volatile. To reflect this uncertainty, the new values are italicized.

Values for Vietnam stamps, with few exceptions, were adjusted downward, some substantially. The review resulted in almost 500 value changes.

A careful examination of the listings of the Democratic Republic of Vietnam resulted in a mix of increases and decreases for stamps from 1970 to the 1990s. Mostly increases in values are found from 2005 onward. The review resulted in almost 1,200 value changes. Among the Viet Minh issues, the 1945 50¢ dull red (Athlete) overprint (Scott 1L4) moves upward from $16 unused to $20, and from $20 used to $25.

A thorough review of the listings of Yemen resulted in more than almost 1,150 value changes. Most of the value changes reflect a softening of this market. Many values for footnoted items also were updated throughout the listings. The footnoted value for the Opening of Mutawakkili Hospital imperforate set of Scott 49-52 more than doubles, from $15 to $40.

More than 50 value changes were made among the Western Ukraine listings. Significant increases can be found for stamps from the Second Stanyslaviv issue, especially Scott 64-75.

Editorial enhancements for Vol. 6B

Upper Senegal and Niger: Imperforate stamps and booklet panes were added to the listings of this former French colony in Northwest Africa.

Democratic Republic of Vietnam: Values for imperforate stamps have been added from 1982 onward. Values for footnoted items were updated.