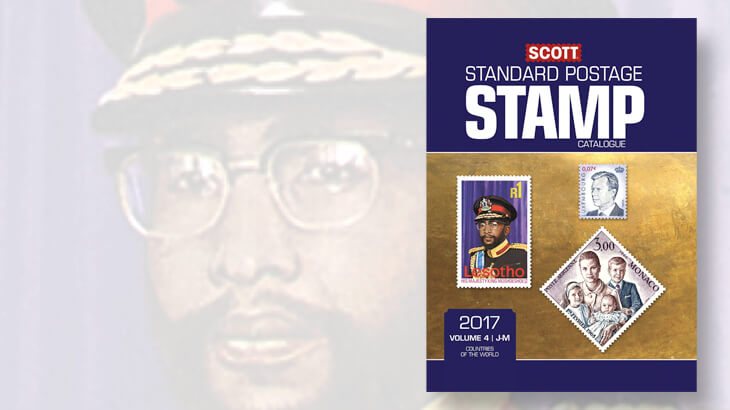 Vol. 4 of the 2017 Scott Standard Postage Stamp Catalogue includes listings and values for countries of the world J-M.

Monaco, Malta and Liechtenstein lead the way in the number of value changes in the recently published Vo. 4 of the 2017 Scott Standard Postage Stamp Catalogue, which features more than 13,600 value changes in total.

The Scott editors gave Monaco a close inspection this year, which results in almost 2,800 value changes. A somewhat weaker euro against the dollar pushed most of these changes in a downward direction. The declines are concentrated among issues from the 1980s through early 2015.

Scattered increases and decreases are among the 1,415 value changes in Liechtenstein. A softening of the Swiss franc contributes to the decreases among the stamps of this country.

A careful review of Kenya, Uganda and Tanzania yields 229 value changes. Scattered declines are seen for modern issues, but the early classics show some robust increases. The 1921 50-rupee King George V (Scott 11) is now valued with a revenue cancel at $425.

Approximately 80 value changes, mostly decreases, are recorded in the pre-republic listings for Kosovo. Lower retail prices in the marketplace necessitated these changes. The 2006 €2 International Peace Day stamp (Scott 58) decreases from $15 mint and used to $9.

The 123 value changes recorded for Mozambique are scattered throughout the listings. Collectors of this country will be pleased to know that all of these value changes are positive.

In Kuwait, two new color-omitted errors have been added to the 1964 Sheik Abdullah set as Nos. 230b and 232b. Both are missing the silver country name and denomination inscriptions, and are valued at $1,250. They are believed to be the only documented color-omitted errors for Kuwait.

Three new unwatermarked varieties of the Lesotho 1976 Scenes set have been added as Nos. 205a, 206a and 207a. The values for these stamps in used condition are in italics, which means that the stamps must have contemporaneous postmarks.

In Malaysia, five new errors — two color-omitted and three imperforate pairs — have been added to the listings for the 1965 Birds definitive set. The yellow-omitted 30¢ Fairy Bluebird is Scott 21b, and the scarlet-omitted 50¢ Black-naped Oriole is Scott 22c. Imperforate pairs of the 50¢ Black-naped Oriole, $2 Argus Pheasant, and $10 Banded Pitta are Scott 22b, 25a, and 27a, respectively.

For information about the 2017 Scott catalogs, contact your favorite dealer, or call Amos Media at 1-800-488-5349. Also visit AmosAdvantage.com. For Scott eCatalogues, visit ScottOnline.com.

Read about previous volumes of the 2017 Scott Standard catalog: