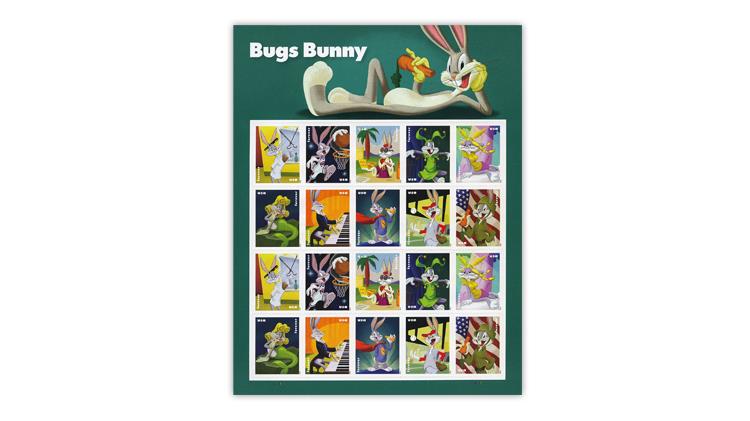 Among the 55 commemorative stamps issued by the United States Postal Service in 2020 is a set of 10 dedicated to the 80th anniversary of the first appearance of the animated cartoon rabbit Bugs Bunny. The stamps, showing illustrations from Warner Bros. En 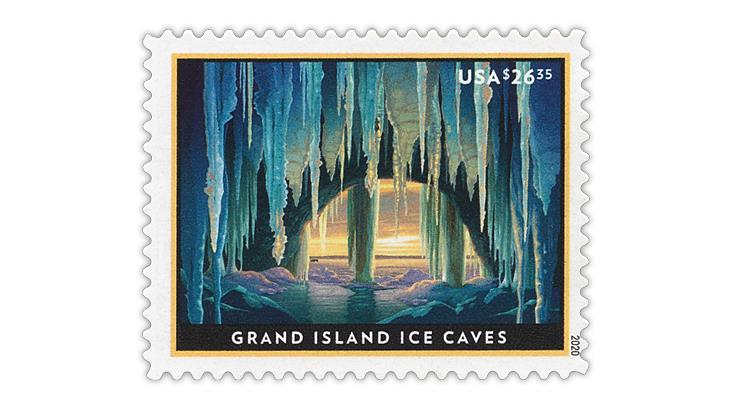 The 23rd and 24th stamps in the American Landmarks series were issued in 2020. The $26.35 Priority Mail Express stamp pictures the Grand Island Ice Caves in northern Michigan. Each stamp in the series, which began in 2008, features a poster-style illustra
Previous
Next

In 2020, the United States Postal Service issued 117 varieties of stamps and postal stationery, the same number issued for the 2019 program. Of this total, 55 are commemoratives, 49 are definitives, 11 are special stamps issued to recognize occasions such as weddings and the Christmas holiday season, and two — a Priority Mail stamped envelope and a forever stamped envelope — are postal stationery items.

A pair of notable historic events are celebrated on 2020 stamps: the 200th anniversary of Maine statehood and the 400th anniversary of the arrival of the Mayflower in Plymouth Harbor along the coast of what would become the state of Massachusetts.

The Postal Service inaugurated a new 12-stamp Lunar New Year series Jan. 11 when it issued a single commemorative celebrating the Year of the Rat. The stamp features a three-dimensional ceremonial mask by Camille Chew, who has been tapped to create mask artwork for all 12 stamps in the series.

Celebrated news anchor and journalist Gwen Ifill is honored on the 43rd issue in the long-running Black Heritage commemorative series. The stamp shows a photograph of Ifill taken in 2008 by photographer Robert Severi.

She was familiar to many Americans as the co-anchor (along with Judy Woodruff) of the Public Broadcasting Service’s evening news show, PBS NewsHour.

“She entered the arena of television news in 1994 on NBC, and then moved to PBS in 1999, working as a senior correspondent and host of Washington Week. She was the first woman and first African-American to moderate a major television news analysis show,” wrote Michael Baadke in the Jan. 27 issue of Linn’s.

The COVID-19 pandemic forced the Postal Service to cancel in-person stamp dedication ceremonies for the rest of the year. However, all stamps in the 2020 program were issued on their official first days.

A commemorative stamp featuring Sea at Ogunquit, a 1914 oil painting by Edward Hopper, was issued March 15 to honor the bicentennial of Maine statehood. The stamp’s issuance occurred 200 years to the day after Maine was admitted as the 23rd state in the Union.

A 6¢ commemorative issued in 1970 for the 150th anniversary of Maine statehood showcases Hopper’s 1929 oil painting The Lighthouse at Two Lights.

Well-known American gardens are pictured on 10 stamps that were issued May 13 in a pane of 20 with a decorative header across the top. Shown in the vignettes (central designs) are photos taken within the gardens between 1996 and 2014 by Allen Rokach.

“The love of gardening stretches back to the earliest years of our country, inspiring George Washington, Thomas Jefferson, and other Founding Fathers to plant some of America’s most iconic colonial-era gardens,” the Postal Service said in a press release.

Building a sandcastle, canoeing, biking, hiking and cross-country skiing are illustrated on a set of five commemoratives titled Enjoy the Great Outdoors.

Award-winning painter and freelance illustrator Gregory Manchess created the artwork for the stamps. Manchess’ work has appeared on several U.S. stamps, the most recent being the 2019 issue for tennis champion Maureen “Little Mo” Connolly Brinker.

The four essential elements of hip-hop culture — rapping, break dancing, the disc jockey and graffiti art — are portrayed on four stamps. DJ Kool Herc is considered the founding father of hip-hop, which flowered as a cultural movement in the Bronx. A break-dancer appears on one of the 33¢ Celebrate the Century stamps for the 1980s that were issued Jan. 12, 2000.

Bugs Bunny, the animated cartoon rabbit, first appeared in a 1940 cartoon titled A Wild Hare. In celebration of the 80th anniversary of that debut, the Postal Service issued 10 stamps in a decorative pane of 20 that depict images of Bugs in some of his more memorable cartoon appearances.

Warner Bros. Entertainment produced the stamp illustrations and the line sketches that are printed on the reverse side of the pane.

Photographs of 10 different woven wire sculptures created by San Francisco artist Ruth Asawa (1926-2013) are featured on the third 10-stamp set to be issued in 2020. Asawa began producing her signature wire sculptures in 1947. Many of her cast sculptures are on display in San Francisco, where she spent most of her adult life.

Five commemoratives issued in a pane of 20 recognize innovations in the scientific fields of computing, biomedicine, genome sequencing, robotics and solar technology. The stamps were issued Aug. 20, during the Aug. 17-22 Virtual Stamp Show sponsored by the American Philatelic Society, the American Topical Association and the American First Day Cover Society.

The centennial of the 1920 ratification of the 19th Amendment to the U.S. Constitution, which guarantees women the right to vote, is celebrated on a commemorative forever stamp. The stylized image of suffragists on the stamp is rendered in purple, white and gold, the colors of the National Woman’s Party founded in 1916 to fight for women’s suffrage.

A stamp commemorating the 400th anniversary of the 1620 arrival of the English merchant ship Mayflower in Plymouth Harbor features a subtle engraved floral element that the Postal Service described as a stylized hawthorn flower.

Close examination of the 2020 Love: Made of Hearts special stamp reveals that the design is composed of almost 300 diminutive hearts in pink or red. St. Jude’s Children’s Hospital in Memphis, Tenn., played host to the Jan. 23 first-day ceremony.

A stylized salute to the U.S. flag appears on a nondenominated (10¢) coil stamp issued in rolls of 3,000 and 10,000 for use on large quantities of business mail sent at reduced postage rates.

The Let’s Celebrate forever special stamp issued on Valentine’s Day, Feb. 14, has an extra spark to it because of metallic foil accents in magenta, orange and teal.

Wild orchids appear on 10 definitive (regular-issue) stamps that were issued in double-sided panes of 20 and rolls of 3,000 and 10,000 coil stamps. Nine different orchid varieties are shown on the stamps, which feature photographs by Jim Fowler.

“Part of the largest family of plants on Earth, orchids grow in many climates and thrive under a variety of conditions,” the Postal Service said. More than 100 species of orchids are native to North America.

The nondenominated (55¢) Contemporary Boutonniere forever stamp and the (70¢) Garden Corsage 2-ounce rate stamp were intended primarily for use on wedding invitations, but both stamps are valid for postage on any type of mail.

The 1988 25¢ and 45¢ Love Rose stamps were the first matching pair of stamps that the Postal Service issued for use on wedding invitations. Since then such stamps have become a regular component of the U.S. stamp program.

A definitive for Earth Day celebrates the 50th anniversary of the national observance that was the 1970 brainchild of Sen. Gaylord Nelson of Wisconsin (1916-2005).

In 1995, the Postal Service and McDonald’s teamed up to sponsor a stamp design contest for children. The four winning designs, selected from more than 150,000 entries, are pictured on the four 32¢ Kids Care Earth Day stamps issued in 1995.

A pink chrysanthemum appears on the nondenominated ($1.20) global forever stamp issued in panes of 10. Like its six predecessors, the stamp is round and is inscribed “GLOBAL” to indicate that it is intended for use on first-class international mail weighing 1 ounce or less. The global rate increased from $1.15 to $1.20 on Jan. 26.

Fruits and vegetables are also the subject of the four Summer Harvest forever stamps issued in 2015.

“Dana Tanamachi, the stamp designer and lettering artist, drew the original sketches for the calligraphy by hand and then created the final art digitally. She added floral elements to the swirls, which resemble vines,” the USPS said in its press release for the stamps.

The Hanukkah stamp, featuring an illustration by Jing Jing Tsong, is the 14th U.S. stamp issued for the Jewish holiday that recalls the victory of the Jewish Maccabees over Antiochus IV Epiphanes in 164 B.C.

Andrea Pippins created the artwork for the Kwanzaa stamp, which honors the holiday developed in 1966 at the height of the Black freedom movement. The name Kwanzaa comes from a Swahili phrase that means “first fruits.”

Farm buildings, birds and other animals set against snowy landscapes are featured on the 10 Winter Scenes definitive stamps. The Postal Service used unattributed stock photographs to create the designs.

A total of 400 million Winter Scenes stamps were printed in double-sided panes of 20.

This year’s traditional Christmas stamp illustrates a detail from Our Lady of Guapulo, an oil-on-canvas painting by an unknown 18th-century Peruvian artist. The painting resides in the collection of the Metropolitan Museum of Art in New York City.

In the painting, both Mary and Jesus are shown in ornate jeweled gowns. Near the bottom of the painting, which is not shown on the stamp, six cherubic figures are visible inside a frame.

They are the 23rd and 24th stamps in the American Landmarks series that started in 2008, and, like the others in this series, show vivid poster-style illustrations by Dan Cosgrove of Chicago.

The $26.35 Grand Island Ice Caves has the largest face value of any U.S. postage stamp in history, eclipsing the 2019 $25.50 stamp depicting the Bethesda Fountain in New York City’s Central Park.

The other item of postal stationery is a nondenominated (55¢) forever stamped envelope showing Kit Hinrichs’ graphic illustration of the 50-star U.S. flag. The U.S. Flag envelope was issued in 10 different formats. The 2018 U.S. Flag definitive stamps and the 2018 commemorative honoring the bicentennial of the 1818 Flag Act also show artwork by Hinrichs.

Readers wishing to vote online may do so here.