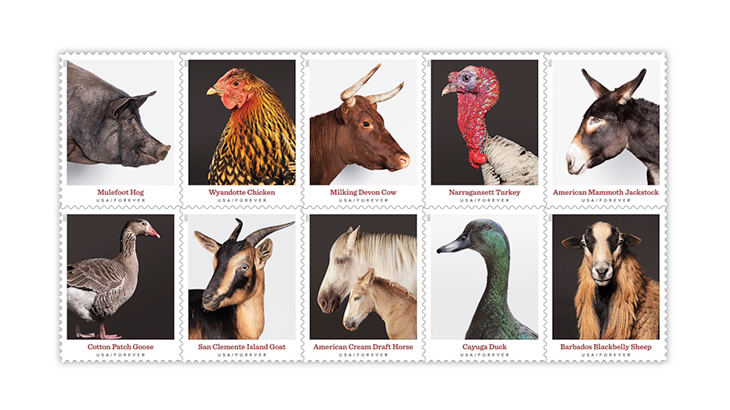 Among the 69 commemoratives in the 2021 United States stamp program is a set of 10 featuring photographs of American heritage breeds of historic significance. The stamps were issued May 17 at Mount Vernon, the home of George Washington in Mount Vernon, Va

In 2021 the United States Postal Service issued 112 varieties of stamps and postal stationery, just five fewer than were issued for the 2020 program. Of this total, 69 are commemoratives, 40 are definitive (regular-issue) and special stamps and three are postal stationery items: a Priority Mail stamped envelope and two postal cards.

Special stamps are issued to recognize occasions such as weddings and the Christmas holiday season.

Renowned playwright August Wilson is celebrated on the 44th issue in the long-running Black Heritage commemorative series. The stamp features an oil painting by Tim O’Brien that is modeled on a David Cooper photograph of Wilson taken in 2004.

A picket fence is visible in the vignette behind Wilson, a subtle reference to his 1987 play Fences, which received a Tony award for best play and a Pulitzer prize for drama. Wilson died from stomach cancer in 2005.

Both stamps feature a three-dimensional ceremonial mask by Camille Chew, who has been tapped to create mask artwork for all 12 stamps in the series.

Wu joined the faculty of Columbia University in 1944 and was promoted to full professor in 1958. She became the first woman president of the American Physical Society in 1975.

Mechanical androids from the popular Star Wars film franchise and media empire are featured on 10 forever stamps issued May 4.

The May 4 issue date is celebrated as an informal Star Wars Day because “May the Fourth” is a humorous nod to the hallowed Jedi expression, “May the Force be with you.”

Each stamp in the Star Wars Droids set pictures a single droid (mechanical android) that has appeared in one or more feature films in the fictional Star Wars media franchise or a related television or streaming series.

Characters from the first six live-action Star Wars films were celebrated on a pane of 15 stamps issued in 2007 (Scott 4143) to mark the 30th anniversary of the first film in the series, Star Wars: A New Hope.

Mount Vernon, the iconic home of George Washington in Mount Vernon, Va., played host to the May 17 first-day ceremony for the 10 stamps showing American heritage breeds of historic importance.

The valiant service of approximately 33,000 Japanese American soldiers during World War II is commemorated on a stamp issued June 3 in Los Angeles.

The design features the phrase “Go for Broke,” which was the motto of the all-Japanese American 100th Infantry Battalion/442nd Regimental Combat Team.

In its announcement of the stamps, the Postal Service drew attention to Sanchez’s use of light and shadow to highlight the abstract geometry of his subjects and characterized his artwork as a blend of abstraction and naturalism.

Coronal holes, plasma blasts and related solar phenomena are shown on the 10 Sun Science stamps issued June 18. The stamps were printed by flexography; foil stamping was used to highlight parts of the designs.

“Each stamp reproduces a digital photograph of the full sun as taken from the NASA Solar Dynamics Observatory, which has been in geosynchronous orbit around Earth since 2010,” Michael Baadke wrote in the June 14 Linn’s.

Berra, a powerful hitter and agile catcher, played in 18 All-Star games and was a 10-time World Series champion. He was voted the most valuable player in the American League in 1951, 1954 and 1955.

In 1972 Berra was inducted into the National Baseball Hall of Fame. Two months after his death at the age of 90 on Sept. 22, 2015, he was posthumously awarded the Presidential Medal of Freedom by President Barack Obama.

Five stamps celebrating tap dance were issued July 10 in honor of what the USPS called “a uniquely American contribution to world dance.” The first-day ceremony was held in the Times Square theater district in New York City.

The tap dancers shown on the stamps, all of whom are living, were photographed by Matthew Murphy. The dancers — Max Pollak, Michela Marino Lerman, Derick K. Grant, Dormeshia and Ayodele Casel — were identified in an article published Feb. 18 in Dance magazine.

A colorful commemorative with a hidden message debuted July 14 at the International Spy Museum in Washington, D.C.

In the announcement for the Mystery Message stamp, the Postal Service called the design “a perplexing puzzle that will tie your brain in knots.”

“This visual riddle spells out a difficult-to-discern message. Each colorful square contains a letter in an interesting pattern,” the USPS said.

Nineteen of the 20 boxes on the stamp contain a letter in a pattern of horizontal and vertical lines. The last box, in the bottom right corner, holds an exclamation point. When read in order, the boxes spell out “MORE THAN MEETS THE EYE!”

Raven, a character central to creation stories and other mythical sagas of Indigenous peoples of the Northwest Coast, took flight July 30 on a new forever commemorative stamp.

The stamp’s design is dominated by artist Rico Worl’s bold black image of Raven rendered in formline, a traditional style of Indigenous people of the northern Northwest Coast, according to the Postal Service.

On the stamp, Raven is set against a white background. Gold diamond-shaped stars and circles are seen on the bird’s body and background. A gold circle representing the sun is held in the bird’s beak.

Each stamp shows a painting by Howard Koslow (1924-2016), the artist whose lifelike works appear on all seven sets in the series of Lighthouses stamps that date back to 1990.

A single forever stamp was issued Aug. 10 to mark the bicentennial of Missouri statehood. The first day of issue came 200 years to the day after Missouri became the 24th state in the Union on Aug. 10, 1821.

More than 18 years earlier, in 1803, the United States obtained what is now Missouri from France as part of the Louisiana Purchase.

Although not the first U.S. stamps to highlight recreational sports and games, most of the games portrayed on the Backyard Games stamps have not appeared on U.S. stamps previously.

Four cute but quirky cartoon characters appear on the Message Monsters stamps that debuted Sept. 24 in Topeka, Kan. The monsters on the stamps sprung from the creative mind of Elise Gravel, a Canadian author and illustrator.

As a bonus, the selvage surrounding the 20 stamps in a pane includes miniature printed hearts, hats, flowers, word balloons and thought bubbles that can be applied to a stamp when it is used to mail a card or letter. Additional stickers in the pane margins picture top hats, propeller beanies, knit toques, derbies, wizard hats, crowns, baseball caps and a pirate hat.

The holiday, which has its origins in Mexico, pays tribute to deceased family members and heroes.

Day of the Dead celebrations in family homes feature ofrendas, which are altars decorated with candles, flowers, food, candies and breads. Gatherings are also held at the graves of departed loved ones.

The stamps feature so-called sugar skulls that represent four family members: a child with a hair bow, a mustachioed father wearing a hat, a curly-haired mother and another child.

The 2021 program began Jan. 14 with the latest stamp in the Postal Service’s long-running Love stamp series. The inaugural U.S. Love stamp was a single 8¢ issue in 1973 featuring a famous design by Robert Indiana (Scott 1475).

Four barns are portrayed on stamps issued Jan. 24 in panes of 20 and coil rolls of 100. The nondenominated stamps pay the 36¢ rate to mail a postcard within the United States that took effect the day the stamps were issued.

Stermer made his mark as an illustrator in San Francisco and served as the art director for Ramparts, a political magazine. He also designed the medals awarded at the 1984 Olympic Summer Games in Los Angeles.

Photographs of 10 vibrantly colored flowers by Allen Rokach are pictured on the Garden Beauty stamps issued Feb. 23 in Bloomfield, Ind.

A Colorado hairstreak butterfly is spread across the eighth issue in the Postal Service’s Butterfly series that began in 2010 with the 64¢ Monarch Butterfly (Scott 4462).

Each stamp in the series satisfies the nonmachineable surcharge rate for domestic first-class mail.

A jolt of philatelic caffeine was served up April 9 when the Postal Service issued a quartet of stamps illustrating the following popular espresso drinks: caffe latte, espresso, caffe mocha and cappuccino.

Unlike the aromatic 2018 Frozen Treats stamps (Scott 5285-5294), the Espresso Drinks stamps do not have a coffee scent.

Abilene, Texas, was the first-day city for the July 23 issuance of the four Western Wear definitive stamps. The main subjects of the stamps are a cowboy boot with spur, a cowboy hat, a Western shirt, and a belt buckle featuring a longhorn head.

On Aug. 29 the first-class letter rate increased 3¢, from 55¢ to 58¢. A bit less than two weeks later, on Sept. 9, the Postal Service released a Happy Birthday forever stamp, the first issue at the new rate in the 2021 program.

Lisa Catalone Castro and Rodolfo Castro of Catalone Design Co. designed the stamp, which is the sixth U.S. issue to specifically feature the “happy birthday” greeting.

“Each of the five letters in the word ‘HAPPY’ is inspired by a different party decoration in the midst of a flurry of multicolored ribbons and confetti,” the Postal Service said. “BIRTHDAY” is rendered in unadorned letters beneath the festive “HAPPY.”

Fans of Clement Clark Moore’s beloved 1822 poem, A Visit from St. Nicholas, will recognize similarities between Woodard’s illustrations on the stamps and Moore’s charming descriptions of the “jolly old elf” and his visit to a family’s house on Christmas Eve.

The most recent, issued in 2018, are the four booklet stamps and souvenir sheet of one reprising artwork originally used on advertisements for Coca-Cola (Scott 5332-5336).

The final issue in the 2021 program, the four Otters in Snow forever special stamps, features a clever parallel between the stamps’ subject, otters, and Otter, Mont., the official first-day city.

According to the Postal Service, the stamps depict “four different scenes of the alert and playful North American river otter reveling in winter’s white landscape.”

The stamp is the 25th issue in the American Landmarks series that started in 2008, and, like the others in this series, features a vivid poster-style illustration by Dan Cosgrove of Chicago. The 2020 $26.35 Grand Island Ice Caves has the largest face value of any U.S. postage stamp in history, eclipsing the 2019 $25.50 stamp picturing the Bethesda Fountain in New York City’s Central Park.

For voting purposes, the Mallard Drake cards count as one item on the 2021 stamp poll ballot.