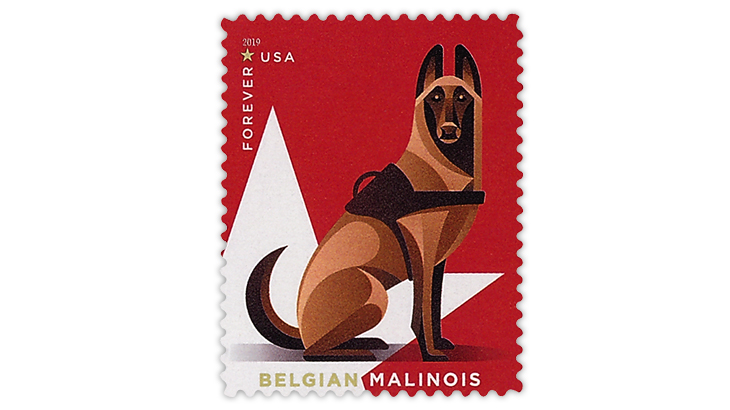 The cartoon caption contest image for December is the Belgian Malinois stamp from the Military Working Dogs block of four forever stamps issued Aug. 1. Entries must be received by Dec. 27 for a chance to win a prize. The rules are in the accompanying arti

The United States Postal Service just issued on Aug. 1 a stamp showing a Belgian Malinois, the same breed of dog hailed as a hero for his role in tracking down Abu Bakr al-Baghdadi during the Oct. 27 raid in which the ISIS leader killed himself.

This forever stamp is part of a block of four honoring military working dogs. The other three stamps depict a German shepherd, Labrador retriever and Dutch shepherd.

The Belgian Malinois stamp (Scott 5407) will be the cartoon caption contest stamp for December.

The Malinois is one of four types of Belgian sheepherding dogs. The name is derived from Malines, the French name for the breed’s city of origin, Mechelen.

The Malinois generally grows to about 2 feet tall at the shoulder, weighing 40 to 80 pounds, and living 12 to 14 years. It is intelligent, easy to train, friendly, watchful, and protective. In other words it is an excellent candidate for police work, search and rescue, and military assignments.

The Belgian Malinois that chased the ISIS leader down a tunnel during the raid is named Conan. News reports say that Conan was "slightly wounded" but has returned to active service.

For the contest, wag your tail as the Belgian Malinois and tell me what you think the dog might be saying about his military service, about stamp collecting, or whatever else you would like to address.

For each winner, the prize will be a 13-week subscription to Linn’s (a new subscription or an extension). Entries must reach me no later than Dec. 27.