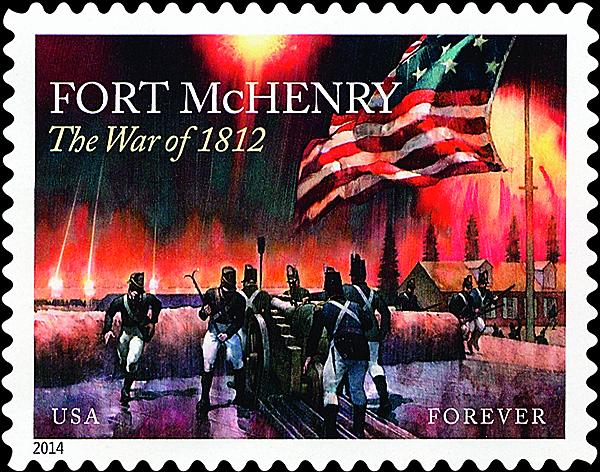 The third United States commemorative stamp in a series marking the bicentennial of the War of 1812 will be issued Sept. 13. The single forever stamp shows a scene from the conflict at Fort McHenry that inspired Francis Scott Key to compose the lyrics for what would become The Star-Spangled Banner.

The Postal Service’s series marking the War of 1812 began in 2012. It is expected to consist of multiple stamps issued through early 2015.

The new nondenominated (49¢) forever stamp will be issued in Baltimore, Md., in a pane of 20.

The first-day ceremony is scheduled for 11 a.m. at the Fort McHenry National Monument and Historic Shrine in Baltimore. The event is open to the public.

Information about the national park and the day’s events can be found at www.starspangled200.com.

The front of the pane has a map background with a decorative design at the right side.

A header reads “The War of 1812” and “Fort McHenry.” A black-and-white Francis Scott Key portrait is underneath the text. Text below reads as follows:

The back of the pane includes an engraved portrait of George Armistead, the commander of the fort during the battle.

The reverse of the pane also includes multiple paragraphs describing the battle.

Postal Service contract printer CCL Label Inc. created 30 million War of 1812 stamps in panes of 20. Post offices have been instructed to sell only the full pane of 20 and not break up panes to sell single stamps.

Both sides of the pane were printed using multiple colors, but the 20 stamps are positioned on the front side of the pane only.

Press sheets, both with and without the die cuts that normally separate individual stamps, were produced in a quantity of 1,000 with die cuts and 1,500 without die cuts. The sheet consists of five panes of 20 stamps and sells for $49.

A pictorial first-day cancel showing the outline of the fort will be available at the first-day ceremony and by mail.

The first-day digital color postmark for the War of 1812 stamp shows a soldier. This color postmark is offered on a Postal Service envelope for $1.64.

Technical specifications for the new War of 1812 stamp are below. Collectors have a 60-day grace period to mail in requests for the first-day postmarks.

Collectors requesting first-day cancels are encouraged to purchase their own stamps and affix them to envelopes. The first-day cover envelopes should be addressed for return (a removable label may be used) and mailed in a larger envelope addressed to War of 1812: Fort McHenry Stamp, M.O.W.S., 900 E. Fayette St., Baltimore, MD 21233-9998. Requests for first-day cancels must be postmarked by Nov. 12.