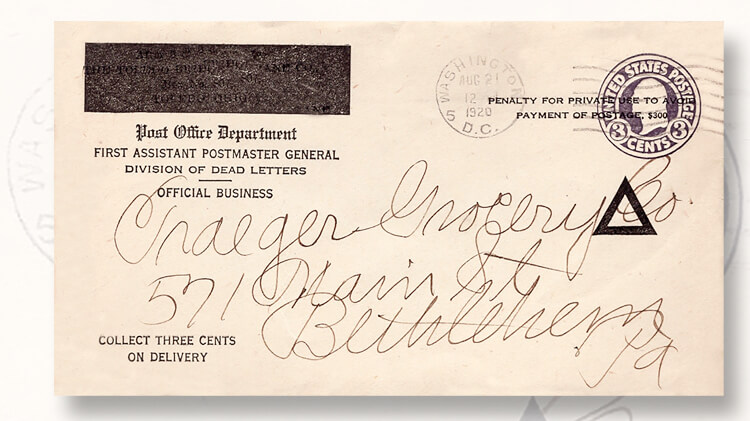 Despite 1917 United States Post Office Department changes in the regional handling of dead-letter mail for various states, there continued to be an active Dead Letter Office in Washington, D.C. This Aug. 21, 1920, envelope from the Dead Letter Office corr

A major change in the Dead Letter Office (DLO) process occurred in early 1917.

In the past, I had made an assumption that was in error: that Washington, D.C., no longer remained a Dead Letter Office/Dead Letter Branch.

However, as one looks carefully at the 1917 list of states serviced by these three new branches, one sees that certain states (for instance, Ohio, Pennsylvania, and the southern states) are not listed. And, in fact, a few months ago I found Washington, D.C., DLO Branch return envelopes to Ohio and Pennsylvania, one of which is shown in the accompanying illustration.

Before I discuss this envelope, it is important to note that effective May 20, 1920 (Postal Bulletin 12263), a further change was introduced: “… that when letters were returned from the Dead Letter Office to the writers, a fee of 3 cents shall be collected at the time of delivery. The fee of 3 cents for the return of letters to writers was to be collected under the provisions of section 39 of the PL&R by means of postage due stamps to be affixed by postmasters to such letters before delivery, and the amount to be charged will be indicated on official or penalty envelopes before dispatch to post offices from the Division of Dead Letters or its respective branches.”

Factors indicating that this is an early example from this time period are the use of the penalty overprint on the 3¢ prestamped envelope indicium, the blackout of return information in the upper-left corner, and the Aug. 21, 1920, date that is early in the DLO return fee period.

By the way, the black triangle, the most commonly seen dead-letter marking, was used to identify items that were Returned to Writer (RTW) by the DLO Returning Division. This division returned all the dead mail containing a legible address but with no apparent value.

Because no postage due stamp was placed on this return envelope, I assume that the dead letter enclosed in it was not returned to the writer. From various annual reports of the postmaster general that I have read, this was not an uncommon occurrence.