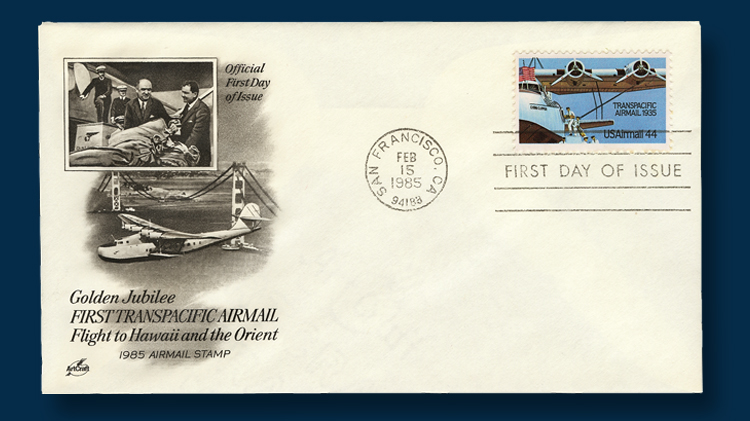 An ArtCraft cacheted first-day cover for the 44¢ airmail stamp issued Feb. 15, 1985, for the 50th anniversary of the first trans-Pacific airmail service. Washington Stamp Exchange, which produced ArtCraft covers, White Ace albums and more, has announced i

Washington Stamp Exchange of Florham Park, N.J., a fixture of the stamp hobby for 85 years, is closing its business at the end of 2018.

The decision was announced in an Oct. 19 press release.

Linn’s First-Day Covers columnist Lloyd de Vries wrote about the history of Washington Stamp Exchange in the April 28, 2014, issue as the company celebrated the 75th anniversary of its ArtCraft line of cacheted first-day covers.

“Founder Leo August began producing cachets in the late 1920s for flight covers, when the Newark Chamber of Commerce and city government didn’t want to be bothered with collector requests,” de Vries wrote.

“In 1932, older brother Sam joined the company, which incorporated as Washington Stamp Exchange.”

The company officially began in 1933, selling FDCs and stamps to collectors.

“Their first location in Newark, N.J., at the corner of Washington and Market Street, became their inspiration to name their business Washington Stamp Exchange,” the company noted in its announcement.

“Stamp issues were relatively infrequent in the early 1940s, so while the ArtCraft first day covers were a quick success, adding new products became important to continuing the growth of their business. In 1945, they released the first White Ace stamp album which they published under the trade name of The Washington Press.”

Albums for numerous other countries were also offered, along with pages for specific worldwide topics.

Washington Stamp Exchange has also sold first-day ceremony programs, autographed covers and photographs, along with other collectibles, including the flight covers and stamps it started with decades ago.

The company also offered mounts and holders for stamps and FDCs under the brand StampMount.

The company discontinued its ArtCraft FDC line at the end of 2015, citing decreasing sales and high production costs. During its history, it had offered serviced and unserviced cacheted covers for all new issues.

The company reported that it intends to sell everything in its stock “at steeply discounted prices,” including FDCs, albums and supplies.

“The disposition of artwork, production materials, equipment and fixtures has not yet been determined,” the company said, as it invited inquiries from dealers and others interested in such items.