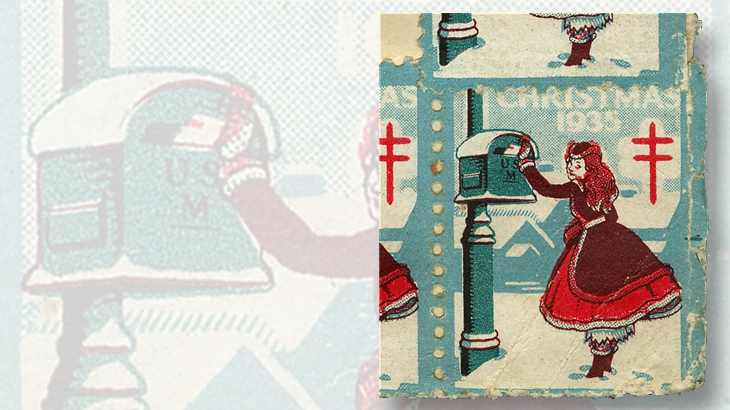 Four printers produced the 1935 Christmas seals. This example, photographically cropped from the cover in the previous illustration, has a tiny black line in the margin, a flaw found only on the seals printed by the Columbian Bank Note Co. 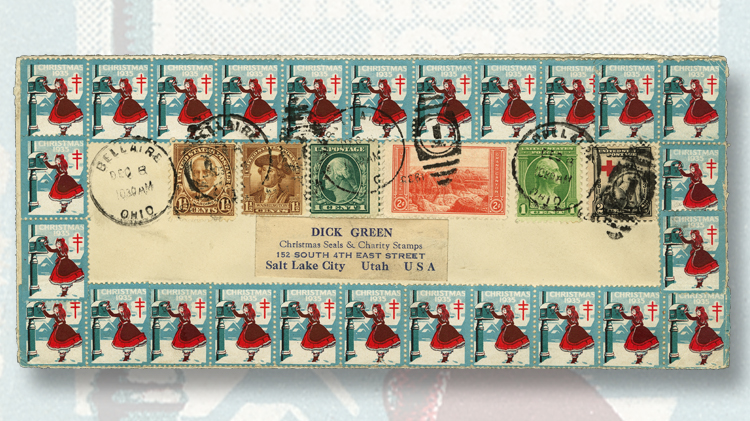 The 1919 cover shown in the first illustration was overtaken by this 1935 cover sent by Christmas seal dealer Joe Ward. It has 26 1935 seals, and is the current record holder. 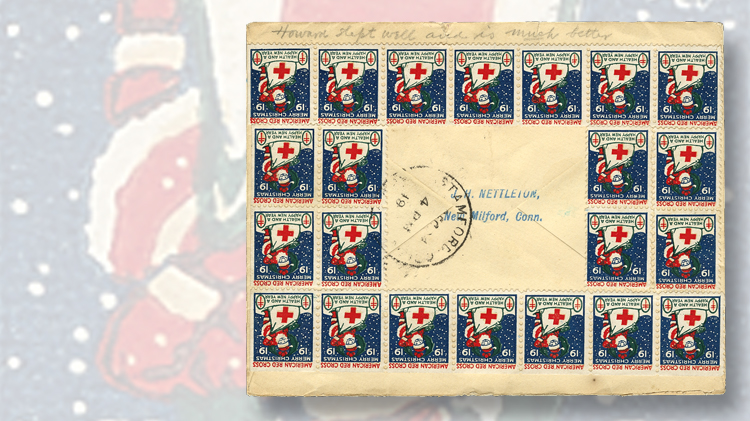 Temporarily the record holder for most Christmas seals on a cover was this 1919 cover from the stock of Christmas seal dealer Denny Peoples. It has 22 examples of the 1919 seals.
Previous
Next

In that column, I challenged Linn’s readers to better that record. The response was excellent.

A cover I discovered in the stock of seal specialist dealer Denny Peoples has 22 1919 seals on the back.

That cover had been in the collection of Dick Green, an early collector of Christmas seals and founder of the Green’s Catalog of the Tuberculosis Seals of the World, first issued in 1930 and now a continuing publication of the Christmas Seal and Charity Stamp Society.

The 1935 Christmas seals on the cover are the version printed by the Columbian Bank Note Co., one of four companies employed to produce the tens of millions of seals needed for nationwide distribution.

The seal in the lower-right corner of the cover is key to this identification. It has a small horizontal black line in the margin, a flaw unique to the Columbian-printed seals.

If anyone can beat 26 Christmas seals on a single cover, I would be delighted to hear from you. Please contact me, John Hotchner, by email at jmhstamp@verizon.net, or by mail at Box 1125, Falls Church, VA 22041-0125.

Strange places the U.S. Christmas seal has been spotted