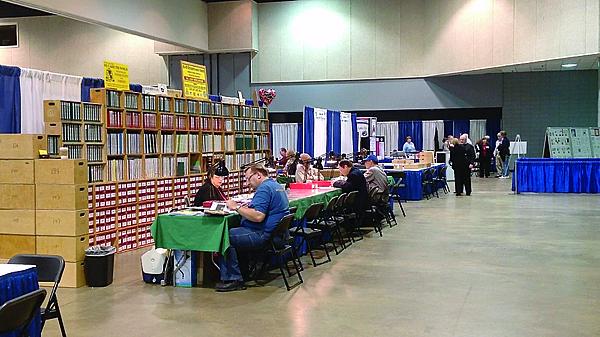 A number of collectors from the East Coast experienced flight disruptions that forced many to cancel their travel plans to Little Rock. A serious snow storm affected many of the large airports on Thursday, Feb. 13.

Weather aside, stamp collectors enjoyed the warm weather and the welcome that they received from the state of Arkansas.

In discussing show attendance, APS board member Alex Haimann told Linn’s that it was “certainly a lighter show.” He said the weather contributed to the light attendance as did Little Rock’s location. Little Rock has no large population centers nearby from which to draw.

“But I think most of the dealers here found the show really to be above their expectations and definitely worth the experience,” Haimann said.

Friday and Saturday were the busiest days of the show. Most dealer booths had at least two customers at their table throughout those days. Sunday was the lightest day for attendance.

Exact attendance figures were unavailable from the APS when this issue of Linn’s was put together.

The USPS booth experienced brisk sales throughout the show, with the best-selling stamp item being the $2 Jenny Invert pane.

Linn’s video coverage of the APS’s Ameristamp show in Little Rock can be found on the YouTube channel, www.youtube.com/linnsstampnews.