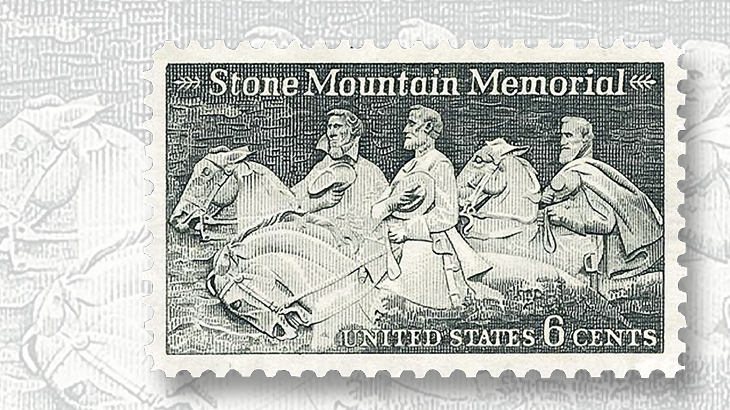 In 1970, the United States Post Office Department issued a 6¢ stamp to commemorate the Stone Mountain Memorial. Ken Lawrence's feature on the stamp's history was this week's top story on Linns.com.

5. Lebanon Conference of Emigrants sheet in demand: Stamp Market Tips: The design of the two 1950 postage stamps depicts the building where the conference was held and flags of the nations from which the emigrants came.

4. Extremely rare Penny Red stamp sells for £495,000: The sale of the second most valuable stamp in the United Kingdom to an unnamed British collector occurred last week and was facilitated by London-based dealers Stanley Gibbons.

3. Postmasters working for the U.S. Postal Service in small towns earn top salaries: A survey by FedSmith, a blog that writes about the federal bureaucracy, makes an interesting point about where the good-paying jobs in the United States Postal Service can be found.

2. Two upright $2 Jenny Invert panes top $75,000 each on eBay: NobleSpirit, a top stamp seller on the eBay online commerce platform, reports that it has achieved “the two highest world record prices” for two panes of six of the rare variety.

1. Stone Mountain, Georgia: its history, monument, controversy, and commemorative stamp: Ken Lawrence summarizes the historical and political background of the memorial and suggests that the 1970 stamp that honored it was a veiled gift to Southern advocates of white supremacy.