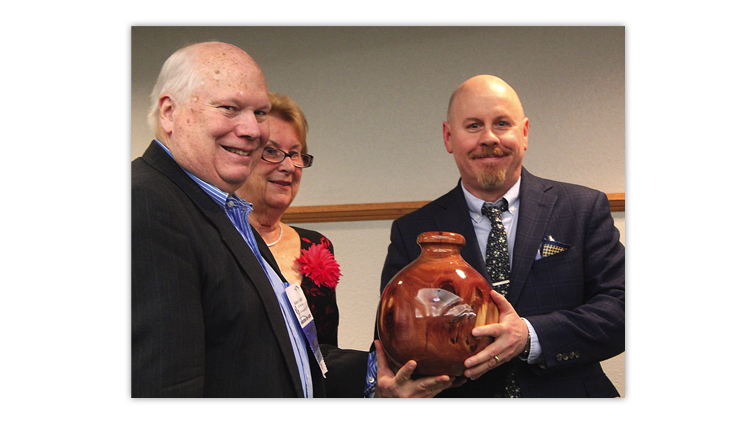 Doug Weisz won the 2019 single-frame Champion of Champions with his exhibit “New Orleans in the Confederate Mail System.” The announcement and presentation of the annual award took place in Mesa, Ariz., during the American Philatelic Society’s 2019 Ameristamp Expo held Feb. 15-17. A longtime collector, Weisz is also a full-time dealer in postal history.

As described by the title page, his exhibit illustrates the handling of mail in New Orleans, La., “from the first day the Confederate States assumed their own postal system to the occupation of New Orleans by Union troops: June 1, 1861 to April 25, 1862.”

The exhibit includes New Orleans provisional uses, Confederate stampless unpaid mail and the use of Confederate States postage during the period studied.

This is the first exhibit Weisz has created.

“I have been working on it for several years and researching the story for even more,” Weisz told Linn’s.

He first entered the exhibit at the 2018 Greater Houston Stamp Show, where he won the single-frame grand award.

To qualify for the Champion of Champions competition, the exhibit had to win the single-frame grand award at an APS World Series of Philately show, which happened when he collected the top single-frame prize at Florex, the annual stamp show and exhibition sponsored by the Florida Stamp Dealers’ Association, held Nov. 30-Dec. 3, 2018, in Kissimmee.

Weisz’ exhibit was one of 28 single-frame World Series of Philately grand award winners from the past year competing for the top prize in Mesa.

He plans to continue showing it as a noncompetitive exhibit at future stamp shows and exhibitions, including the Garfield-Perry March Party, March 15-17, near Cleveland, Ohio; the March 23-24 Springpex show in Springfield, Va.; the Plymouth Show, April 13-14, in Plymouth, Mich.; Philatelic Show, May 3-5, in Boxborough, Mass.; and Napex, June 7-9, in McLean, Va.