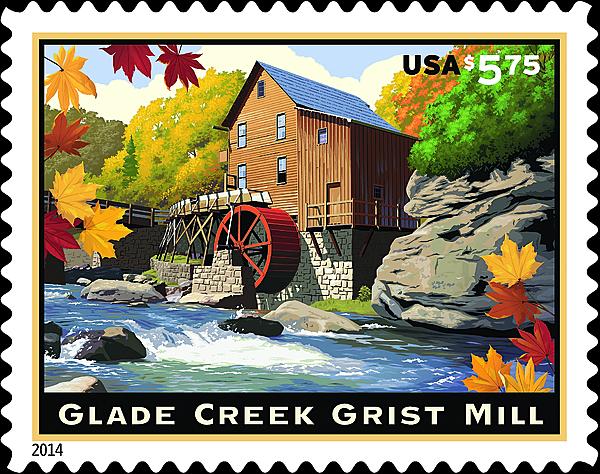 The United States $5.75 Glade Creek Grist Mill Priority Mail stamp is scheduled to be issued in October to meet a new flat rate to go into effect Sept. 7.

The scenic Glade Creek Grist Mill in West Virginia will be featured on a new high-denomination United States $5.75 stamp to be issued in October.

The stamp will pay the domestic postage for the Priority Mail flat-rate envelope following a planned Sept. 7 rate increase for that product. The previous rate was $5.60.

The issue date and first-day ceremony location for the new stamp have not been announced as of Aug. 21.

The preliminary design pictured here was provided by the U.S. Postal Service.

The Glade Creek Grist Mill is located within Babcock State Park in southern West Virginia. The mill is a re-creation built in the 1970s. More than 500 mills like this dotted the landscape of West Virginia in the early 1900s.

Dan Cosgrove created the stamp design that depicts the mill in a fall scene with colorful leaves flanking the border.

Cosgrove has illustrated all of the Priority Mail and Express Mail stamps issued by the USPS since 2008.

It is unknown if the new stamp will be offered in press sheet format. It is also unknown if a Priority Mail stamped envelope using the same design will be issued as well.