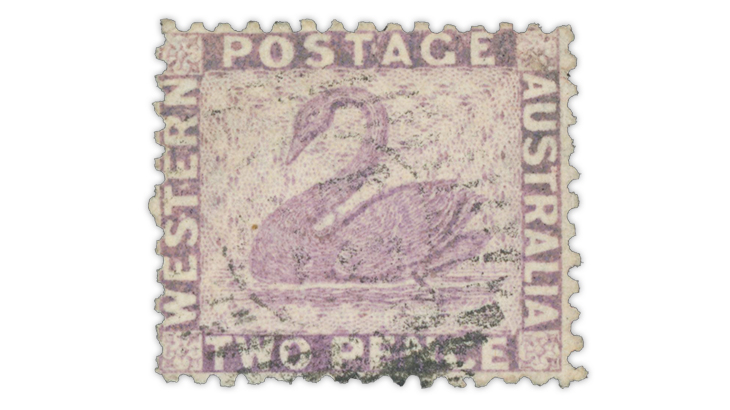 The 1865-79 2-penny Swan stamp color error from Western Australia is offered in the Aug. 5-6 Abacus auction. The unusual stamp was printed in lilac (sometimes described as mauve) instead of the proper yellow color.

Abacus Auctions in Mount Waverly, Victoria, Australia (a Melbourne suburb), will hold its next public auction Aug. 5-6 in the firm’s showrooms.

Much of what’s offered is from philately's classic era, but some intriguing items from recent years are included as well.

Two different examples of a classic error from Western Australia are offered in this sale.

The 2-penny stamp was printed in yellow, but is known as an error of color (Scott 31a)printed in lilac (sometimes described as mauve).

Of the two examples in the Abacus auction, one is unused and the other (pictured here) is used.

The unused stamp has a few pulled or short perforations, is described as “slightly faded,” and is accompanied by a 1966 British Philatelic Association certificate that indicates a repair near the top of the stamp.

Abacus states, however, that it cannot discern said repair and suggests a small stain in the described spot might be what was noted.

With an estimate of A$12,000 (US$8,900), the second stamp is lightly canceled, and described as “Rare used, this being one of the finest known examples.”

The 2018 Krzysztof Ceremuga certificate describes the stamp as genuine in all respects.

The auction includes a diverse variety of material, including various examples, some from the United States, of interrupted and disaster mail, mostly from maritime and railway incidents.

There is much to look through in this two-day auction, and collectors far from Melbourne can still participate using available online bidding options.