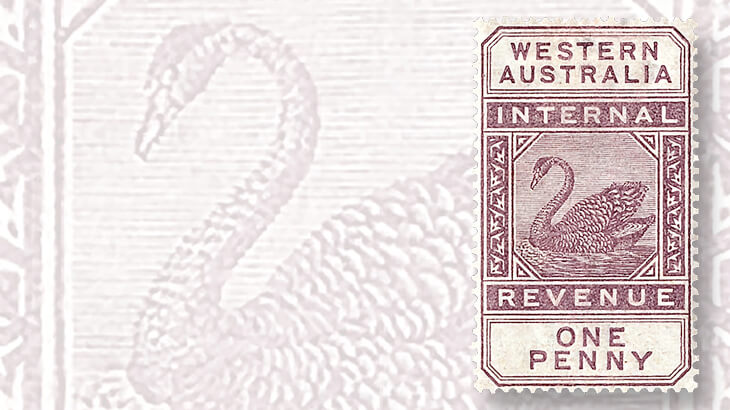 The Western Australian 1-penny Black Swan postal-fiscal stamp on paper watermarked crown and “W A” (Scott AR8) is a good buy in unused original gum condition at the 2017 Scott Classic Specialized Catalogue of Stamps and Covers 1840-1940 value of $22.50.

Stamps of Australia and Australian states have long been popular with American collectors. The two countries share a similar history and frontier culture. Close military cooperation against the Japanese in World War II strengthened and deepened these ties.

Australia is both the smallest and the oldest continent. Prior to European colonization, it was inhabited by indigenous peoples speaking more than 250 different languages, and by an amazing variety of marsupial mammals found nowhere else.

First visited by Dutch and British explorers in the 17th century, it was colonized by the British beginning in 1788. The six separate colonies founded on the continent and the island of Tasmania formed a federation as the Commonwealth of Australia on Jan. 1, 1901. All six colonies had issued and used their own stamps, and they continued to do so as states of the federation until 1913.

Postal-fiscal stamps were originally issued as revenue stamps to show payment of a tax, but were later authorized for postal use. Several Australian states have issued postal-fiscal stamps. While most are large and colorful, many are also very expensive.

The 1882 Western Australian Black Swan postal-fiscal stamps (Scott AR3-AR11) are among the most affordable. Most are selling at or above 2017 Scott Classic Specialized Catalogue of Stamps and Covers 1840-1940 values in unused original gum condition. The 1-penny Black Swan postal-fiscal stamp on paper watermarked crown and “W A” (AR8), with a Scott catalog value of $22.50, is a good place to start.