What are these children thinking? You tell us 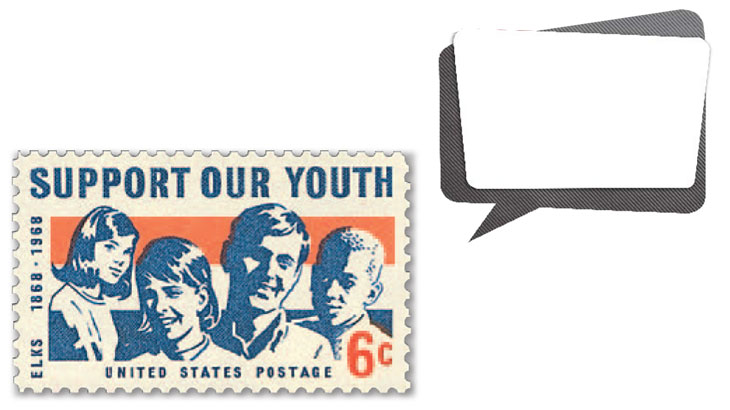 The cartoon caption contest stamp for November is this 1968 6¢ commemorative featuring four young people under the banner “Support Our Youth.” You can enter the contest by telling us what you think they might be thinking or saying about political movement

Much is made these days of the future of the United States being in the hands of the generations following today’s senior citizens. Some of those in the 50-and-under age groups have very different outlooks on the United States and its role in the world, and they often express them in a language that seniors may not understand, from social media shorthand to millennial slang.

Whatever the language may be, many of us are mystified by what it means.

So, let’s recognize this dynamic by using the 1968 6¢ Support Our Youth commemorative (Scott 1342) as the cartoon caption contest stamp for November.

Your task is to put a thought from the youth viewpoint into the balloon provided. You can comment on political movements, stamp collecting, the language of the young, sports, or anything else that strikes your fancy.

Put your entry (or entries) on a postcard if possible and send it to me, John Hotchner, Cartoon Contest, Box 1125, Falls Church, VA 22041-0125; or by email. If you send an email, it is essential that you include your postal mailing address.

To be considered for the prizes, entries must reach me no later than Nov. 23.