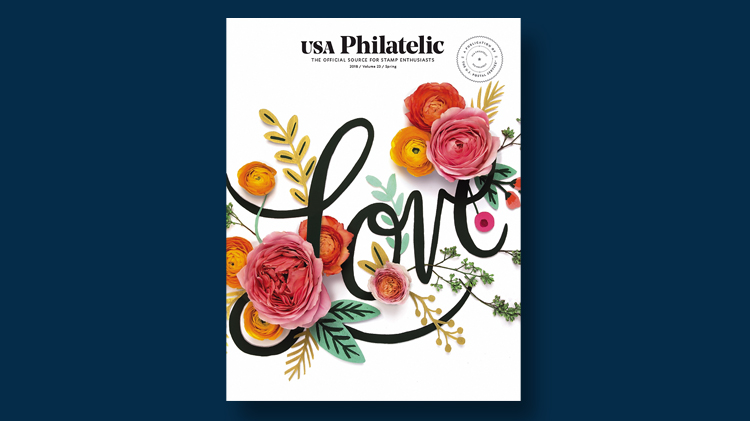 USA Philatelic is mailed to stamp collectors who order items from Stamp Fulfillment Services (the caves), but what does the Postal Service do to advertise new stamps to others? 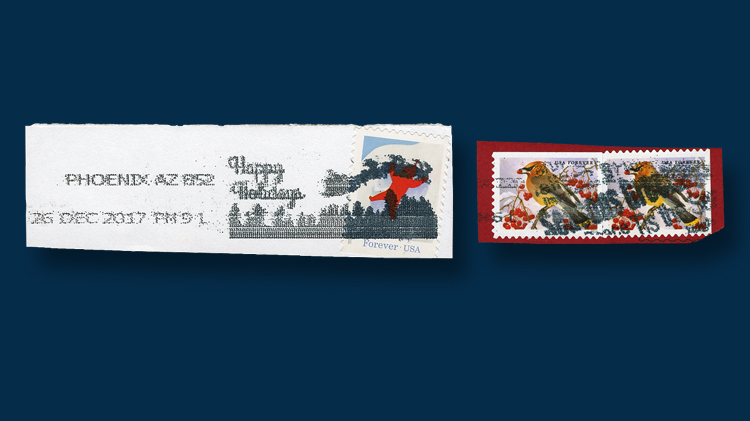 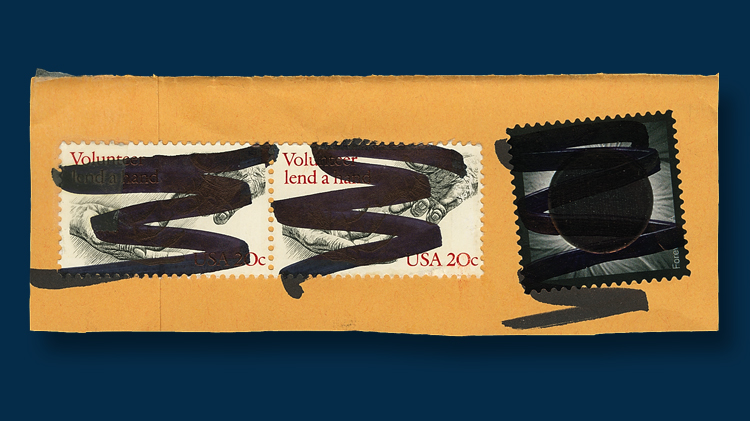 Protecting revenue by defacing stamps that have missed the canceling process appears to allow some postal personnel to take out their frustrations on otherwise collectible stamps like these Volunteerism stamps and a Total Solar Eclipse stamp. This is not 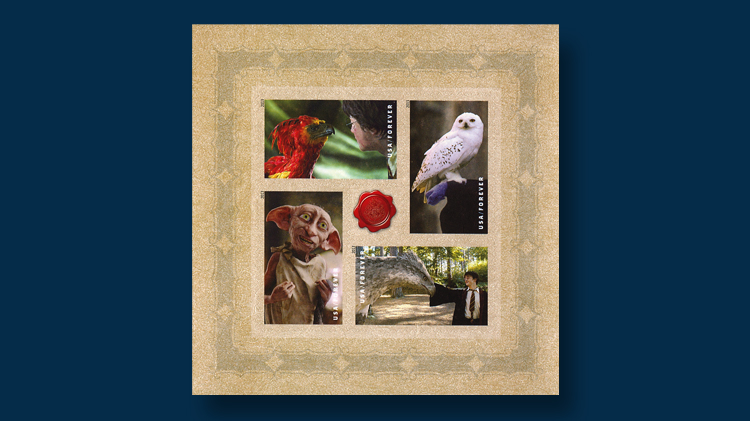 One pane from the 2013 Harry Potter booklet of 20 stamps. Are large issues featuring pop culture subjects such this necessary? The author of these column suggests that the number of different stamps in such issues be reduced. 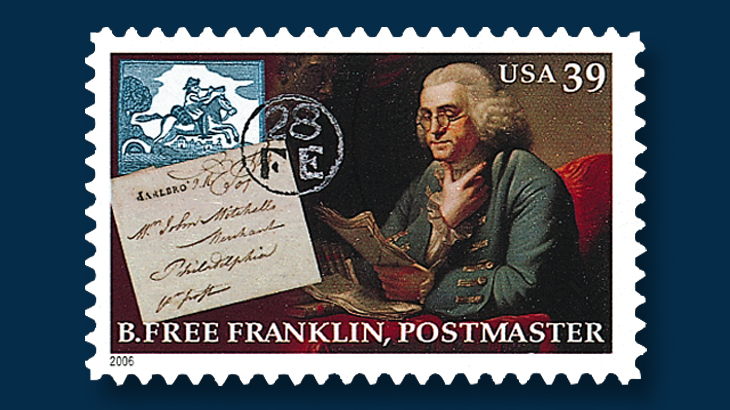 Almost all recent United States stamps are self-adhesives. Perhaps some stamps, especially commemoratives such as this 2006 39¢ Benjamin Franklin stamp, could also be produced as lick-and-sticks for collectors.
Previous
Next

A recent opportunity to talk with United States Postal Service headquarters personnel led me to think about what the USPS could do to burnish its reputation as a collector-friendly organization, one that better balances its own needs with those of America’s stamp collectors in a way that encourages new collectors and, not incidentally, new revenue as well.

I came up with a dozen items.

Self-adhesive stamps have literally driven a sizable minority of stamp collectors to end their collections at the point that the USPS began to issue un-soakable self-stick stamps.

I understand that the American public likes self-adhesive stamps and that the Postal Service can’t backtrack on its decision to supply what the public wants. However, it is clear that collectors, for the most part, hate self-adhesives that can’t be soaked from the envelopes that carry them.

If self-adhesives can’t be made soakable, how about a compromise: at least issue commemoratives — which the Postal Service hopes will go into albums — in lick-and-stick form?

Seasonal cancellations have been a disaster for many years now. I can’t believe no one has rung the Postal Service’s chimes over this, but take a look at the two Christmas cancellations from the last two years that are shown nearby. They obliterate the stamps, thus actively discouraging collectors and potential collectors.

Is there no better way to assure revenue protection without wrecking the stamps? The everyday cancellations on most mail aren’t as heavy-handed. Why does they need to be at Christmastime? Also they use more ink, which is a cost factor.

An old but equally valid complaint is the destruction of collectible stamps by postal personnel who use pens or markers to deface stamps that have somehow skipped a normal cancellation.

This is done in the name of revenue protection, and I understand that some method needs to be standardized so that stamps can be voided for further use. A small self-inking handstamp could be provided to postal personnel.

But if that is deemed too time consuming, at least could not the staff who are doing this be told that destruction of the stamps (often lovingly chosen and applied by collectors) is something to be avoided?

While not ideal from the collector standpoint, a single line through the denomination would be far better than what is now practiced.

There is a need for the Postal Service to go where youngsters and young professionals are; in other words, the USPS needs to have a presence for collectors on the internet. It has made some progress on this for collectors in general, but the most glaring lack is the absence of a separate website that would be attractive to youth.

The attitude now seems to be “leave it to others.” After all, children don’t buy stamps.

But that is shortsighted. Adults buy presents for birthdays, holidays, graduations and more. If children were interested in stamp collecting and asked for USPS products as gifts, this could create a niche market that could bring revenue in the short term, and lifetimes of sales to adult collectors who began in their school years.

This process starts with a place on the internet that encourages young people, informs them about collecting, makes collecting look like fun, makes friends for the USPS, promotes the mailing of letters, and makes stamp collecting something they will want to try.

Change current stamp- issuing policies to eliminate the 10-plus and especially 20-stamp sets of animals, paintings, Disney characters, planets, flowers, Harry Potter, Peanuts cartoons, etc. These looks to collectors (at whom they are mostly aimed) like a grab-and-snatch from our wallets.

Besides this, the subjects are pop culture with little to no recognizable heft in terms of their importance to the history of our nation. Unlike stamps of earlier times, they contain no challenge to learn about the people, concepts and events that have shaped the principles that guide us as we strive for a more perfect union.

There are a few such stamps each year, but they tend to be single stamps rather than multi-stamp sets that the USPS likes to think of as blockbusters, isssues that will rake in the big bucks.

Over the last 30 years, the balance has shifted drastically from stamps from which we can learn, to stamps that are pabulum — beautiful when well designed, but essentially meaningless.

There is no need to do away with such stamps, as they are popular with the public. Reducing the numbers of multi-stamp sets ought to allow for a better balance without the USPS losing revenue.

Promote the use of stamps by returning to the days of standard prices per weight of packages.

Some years ago, someone, likely a bean counter, thought it would be a great idea to rate packages by weight, size, thickness and distance. In theory, this would be fairer to people sending packages short distances. What it has done is to make the mailing process more complicated for both mailers and for postal window clerks.

It used to be that I could mail a package by weight, and avoid post office lines. Now, every package has to be weighed by a clerk, sometimes measured, and then rated.

The unintended consequence is that this takes window clerk time and lengthens post office lines, promotes the use of computer-vended labels instead of stamps, and annoys customers. This needs to be rethought.

Is anyone besides me angered by the number of “skips” received in the mail? Yes some uncanceled stamps do get the treatment already discussed in my third point, but I’ve been keeping track, and as many as one in 20 mailed pieces arrive with no cancellation of the stamps.

Would anyone like to calculate the amount of potential loss to the USPS of reused stamps that have been used but not canceled?

As collectors, we often frank mail with stamps that we want to get canceled. It is a disappointment to have them arrive without cancellations. I have gone to post office windows and asked clerks to cancel stamps on incoming mail; this not only wastes their time, it leaves them incredulous as well.

Another area of loss for the Postal Service is postal counterfeits. These privately produced fake stamps mimic (often very well) genuine postage stamps. They are sold on the internet, wholesaled to small stores, and large mailers all without — it seems — much interest by the Postal Inspection Service.

This is an area of study for me as I find these counterfeits fascinating. In fact, I am the author of the Scott Specialized Catalogue of United States Stamps and Covers listing of postal counterfeits.

What was a cottage industry in the era when U.S. stamps were produced by intaglio engraving has become big business in the photogravure era. Based on the many different counterfeit versions of each new definitive stamp, I estimate that the USPS must be literally losing millions of dollars worth of revenue per year, with almost no visible enforcement.

Granted the loss may be a drop in the bucket in a budget that totes up to billions of dollars, but the more the Postal Service fails to enforce, the bigger this problem will become.

In what was probably a nod to the budgeteers, the USPS killed the Ben Franklin Stamp Club program 25 years ago, the costs not being justified by the revenue brought in on the short term. However, there are other ways that local post offices could work with schools and teachers with little cost involved, like giving tours of post offices and having postal personnel as guest speakers. This needs to be encouraged.

Other than the periodic USA Philatelic, which goes to collectors who buy from Stamp Fulfillment Services, there is precious little that the Postal Service does to market one of its most profitable products — stamps — to the general public. No advertising in its television or print spots, no pamphlet available to the public encouraging the collecting of stamps (as was done in the days when Gordon Morison ran the philatelic division of the USPS), and only the barest of wall hangings in post offices to announce new stamps.

The distributed quantities of collectible stamps, especially commemoratives, to most local post offices are miniscule. If you do not get to your local post office on the first or second day of availability, they are mostly gone.

Buying stamps for a collection falls in the category of impulse item; they are not essential to life. If they can’t be bought at the post office, following the advice to order from Stamp Fulfillment Services requires a level of effort that few people are willing to expend.

Postal window clerks are nice folks, and for the most part are competent and helpful, but many know little about their profitable product and see stamp collectors as a nuisance when we request specific stamps, ask for clear light cancels, etc.

It is too much to hope that we might even be appreciated, but what does the Postal Service do to educate its clerks that stamp collectors help to pay their salary and that putting forth cheerful effort to handle our requests contributes to the bottom line?

There are undoubtedly other current practices that collectors find problematic. You can share them by writing to me at Box 1125, Falls Church, VA 22041, or by sending an email.

Some, though not all, USPS managers, receive Linn’s Stamp News. Perhaps together we can get the Postal Service to initiate needed changes.