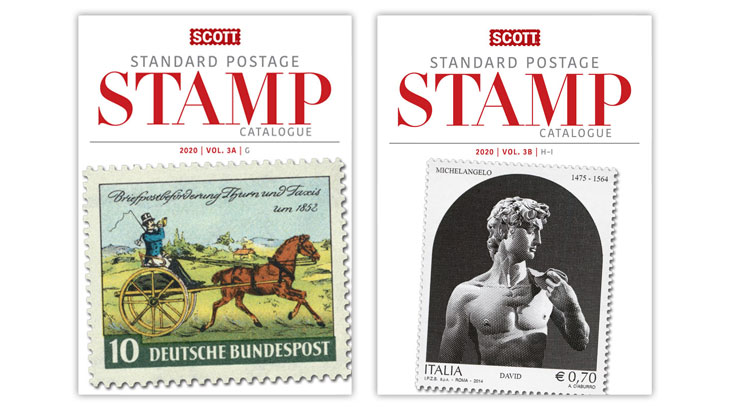 Collectors will want to take note of and look closely at the Germany listings. An exhaustive review resulted in thousands of value changes. Overall, we see a mix of increases and decreases. The 1933 President von Hindenburg booklet pane of three (Scott 415b) increased from $21 to $42.50 in unused condition, and from $37.50 to $75 in used condition.

A couple hundred value changes were made for Great Britain. The sheet of David Bowie stamps (Scott 3591E) that originally sold for £12.95 (approximately U.S. $16.75) increased noticeably in value. This issue appears for the first time in the 2020 Vol. 3A catalog, with a value of $85. It was originally listed and valued at $32.50 in the Scott New Listings Update in Linn’s.

For Alderney almost all of the more than 400 recorded value changes are drops of 10 percent to 15 percent. Dealer stocks are mostly complete, often with multiple quantities of sets in stock. Several early commemorative sets rise modestly in value. The 1992 set of four honoring the 300th anniversary of the Battle of La Houge moves up $1 both mint and used, from $8.25 to $9.25.

Declines predominated among the hundreds of value changes made for Greenland, but a handful of values trend upward modestly. The 1953 dark blue 30-ore Frederik IX rises $4, from $36 in mint condition in 2019 to $40 this year. Scattered increases stand out a bit more for modern issues such as the 2003 Sled Dogs booklet panes (411a and 411b), which advance from $12 each to $15. A few modern semipostal issues also increase in value.

A mixed bag of value increases and value decreases were recorded for the stamps of Guinea-Bissau. Most of the value changes trend down for unused stamps, while scattered used stamps rise a bit in value. One notable increase is seen for the 1974 5-peso Proclamation of Independence (Scott 347), which advances from $14 mint and $6 used in the 2019 catalog to $22.50 and $8, respectively, this year.

For Guyana a dozen new watermark varieties have been added to the 1985-87 Orchids series. Each of these minor listings shows the multiple lotus bud watermark (No. 364).

Issue dates for most of the 1979-82 Guinea-Bissau sets were clarified with the addition of the month and day of issue.

An editorial note was added in the Germany semipostal section to draw attention to the unissued 60-pfennig+30pf 1980 Olympics stamp. Several of the stamps were used by a postal official, which is why the issue exists in collector hands.

And lastly, we encourage you to pay special attention to the Number Additions, Deletions & Changes found on page 915 in this volume. We also suggest reading the catalog introduction, which includes an abundance of useful information.

The stamps of Haiti received a careful review, and numerous souvenir sheets issued after 1997 increase significantly in value. Another notable increase was logged for the 1986 overprinted 25-centime-on-5c Haiti Postage Stamp Centenary stamp (Scott 826A) because of its scarcity in the marketplace. It increased from 30¢ to $115 in unused condition, and from 25¢ to $100 as a used stamp.

For Honduras a couple hundred value changes were made to stamps issued mostly in the years following 2000. Many of the changes were modest increases. One issue with a larger increase was the 2000 Summer Olympics souvenir sheet (Scott C1084) that advanced from $12 to $28 in both unused and used condition.

A complete review of modern India yielded approximately 3,000 value changes. Almost all the changes are in the Postage section. For the most part, values rise, and the increases are most evident for stamps issued from the mid-1980s through 2014. A small number of souvenir sheets show substantial gains in value.

Values for more recent stamps, initially listed at double face value, now reflect market values. Many stamps that were valued at the 25¢ Scott catalog minimum are now valued at 60¢ to 70¢. In the back-of-the-book section of India, the 1953 set overprinted for use by the Korea Custodial Unit (Scott M44-M55) jumps from $41.70 unused in 2019 to $52.25 this year.

A similar review took place for Ireland. Most of the 600 value changes showed slight decreases. However, the values of definitive stamps proved to be stronger, with some increases noted.

For Haiti, listings for five postage due stamps of 1902 with inverted overprints were added to the 2020 catalog. These minor listings are Scott J5a-J9a.

A footnote was added in Israel for the 2008 4.50-shekel Tel Aviv Land Lottery Centennial stamp (Scott 1714) explaining that a normal example with a tab has a straight edge at bottom. Stamps with a tab perforated on all four sides come from a prestige booklet. Additional notes about special booklets also were added to other Israel stamp issues.