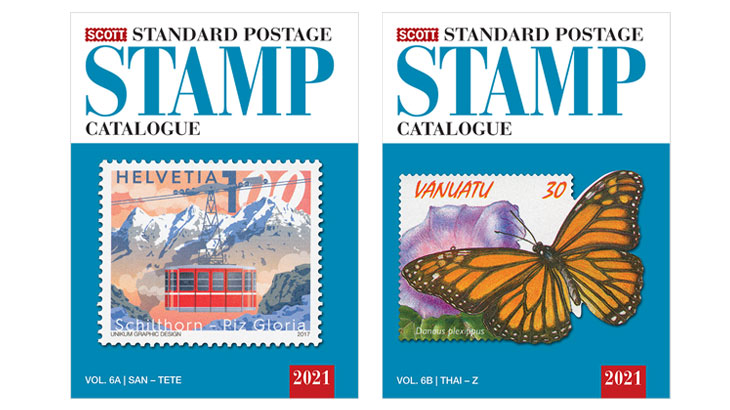 Vol. 6A (countries of the world San Marino through Tete) and Vol. 6B (Thailand through Z) of the 2021 Scott Standard Postage Stamp Catalogue are now available for purchase.

Another catalog season is upon us as we continue the journey of the 152-year history of the Scott catalogs.

The country of Saudi Arabia received a thorough review with more than 2,000 value changes made, largely slight decreases. For example, the 1966 set of five stamps issued to publicize the Eighth Congress of the Arab Telecommunications Union in Riyadh decreased from $16.30 unused to $15.25.

The stamps of Sharjah, one of six Persian Gulf sheikdoms to join the United Arab Emirates in 1971, were reviewed with 174 value changes noted, mostly slight decreases. One exception was the first set of 15 Sheik Saqr bin Sultan al Qasimi, Flag and Map stamps (Scott 1-15). The movement of the value changes was mixed in that set; the unused value decreased from $18.20 to $7.70, and the used value increased from $6.65 to $28.80.

A careful review of Singapore took place, with approximately 450 changes made. Value changes were mixed with slight drops in value for post-1980s stamps. Editorially, the modern dated definitive varieties were double-checked, and a couple of additions were made. See the Number Additions, Deletions & Changes list in the catalog for the specific items added. One increase to note was the 1970 set of four Sea Shells stamps (Scott 112-115), which went from $18.50 to $20.50 unused. Also the souvenir sheet of these four stamps (115a) moved from $30 to $35.

South Sudan overprints from 2017 were reviewed, and increases were made for 12 values. For example, the surcharged £75-on-£2 Bearded Vultures stamp went from $7 unused and used to $11 both ways. The values are in italics because this stamp is challenging to value and does not trade frequently.

Many of the values that changed for Spain’s post-2008 stamp issues reflected slight increases, especially for stamps in used condition. For example, the used value for the 2010 Cathedrals of Plasencia souvenir sheet (3702) was changed to match the $7.50 unused value.

Sweden from 1920 to date was thoroughly reviewed. The result was approximately 4,600 value changes, with decreases outweighing increases. The most sizeable decreases were noted for booklet panes of stamps. Additionally, values for recent used stamps were adjusted to reflect what they are selling for.

The Scott catalog editors added a minor variety for Switzerland Scott 232b. The catalog now pictures Type I and Type II varieties of the 1936 20-centime carmine St. Gotthard Railroad stamp that have distinct visual differences.

The 1913-14 stamps of the Portuguese colonial district of Tete were reviewed, and a handful of value changes were made for the 40 major Scott numbers listed. Overall increases were noted throughout those changes, including the 7½-centavo-on-75-real Vasco da Gama stamp (Scott 14), which moved from $4 unused to $5.

The stamps of the United Arab Emirates were reviewed, with a mix of increases and decreases among the more than 1,300 value changes. One larger increase was for the 2017 National Program for Happiness and Positivity souvenir sheet (Scott 1160), which moved from $8.75 to $20 in both unused condition and used condition.

Uruguay was reviewed, with almost 2,000 value changes made. The first stamp of Uruguay, the 60-centavo blue El Sol de Mayo (Scott 1), increased in unused condition from $450 to $650.

The Scott editors also upgraded footnoted date varieties of a couple of Uruguay's 1997 definitive stamps that show a children’s painting and the bird of prey Geranoaetus melanoleucus (Scott 1674-1675).

And lastly, we encourage you to pay special attention to the Number Additions, Deletions & Changes in this volume. We also suggest reading the catalog introduction, which includes an abundance of useful information.