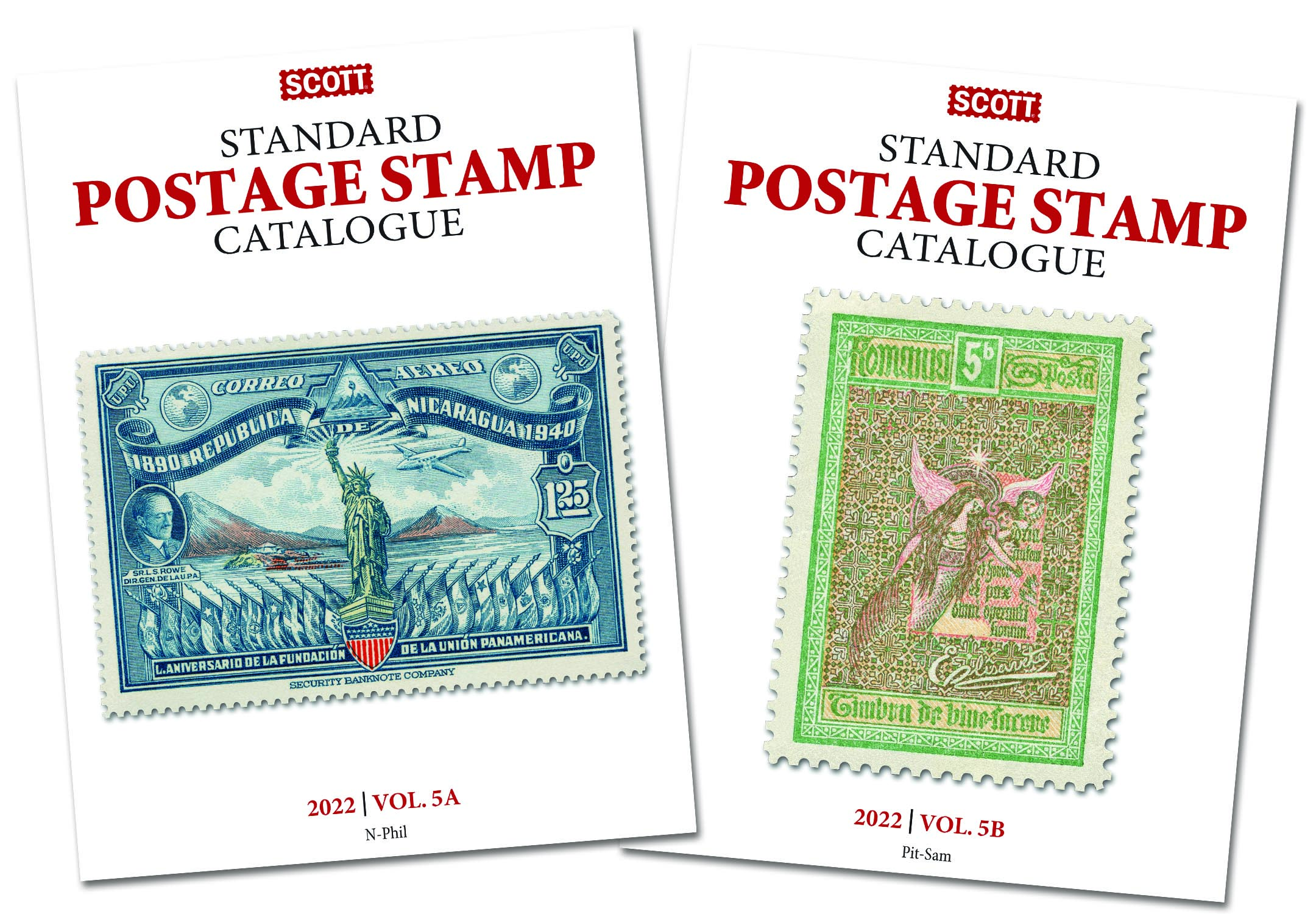 Vol. 5A (countries of the world Namibia through Philippines) and Vol. 5B (Pitcairn Islands through Samoa) of the 2022 Scott Standard Postage Stamp Catalogue are now available for purchase.

Another catalog season is upon us as we continue the journey of the 153-year history of the Scott catalogs. The 2022 volumes are the 178th edition of the Scott Standard Postage Stamp Catalogue. Volume 5A includes listings for the countries of the world Namibia through Philippines. Listings for Pitcairn Islands through Samoa can be found in Volume 5B.

Because Vol. 5B is a continuation of the first part of the Vol. 5 catalog, the introduction pages are not repeated in each volume this year.

Nicaragua received a close review this catalog season, and almost 3,000 value changes were made throughout. A sizeable number of changes reflected increases and strength in more modern items. The 1994 sheet of 16 Dinosaurs stamps (Scott 2041) moved from $9.50 to $16 in unused condition, and the 2019 Managua 200th Anniversary sheet of eight increased to $12 from $8.25 unused.

A couple of sets of stamps issued in 1990 during a period of currency reform were previously listed and pictured in the catalog with values, but without catalog numbers. Numbers were reserved and were added for this year’s catalog. Additionally, a number of previously footnoted items were located and listed through the Scott New Issues Update section published in Linn’s Stamp News. Those listings now appear in the catalog.

Panama was examined with approximately 1,250 value changes made. Most of these changes were slight increases. For example, the set of six 1967 Works of Famous Artists souvenir sheets (Scott 479F-479K) increased from $57 unused to $96. Additionally, footnotes were added to indicate the existence of imperforate examples for selected issues; these notes also provide values. Never-hinged values were also added for stamps issued in the late 1930s to the mid-1940s.

Almost 2,600 value changes were made for the stamps of Paraguay. There were many increases, and some of these were fairly dramatic. For example, the 1968 50-guarani Currier and Ives souvenir sheet (Scott 1108) from a set of stamps featuring paintings increased from $15 to $50 in both unused and used condition. A number of stamp illustrations were updated to replace examples overprinted “MUESTRA,” which is Spanish for specimen.

The stamps of Peru also saw numerous value increases, with nearly 2,000 value changes made overall. An example of a single stamp issue that increased is the 1989 100-inti Express Mail Service stamp (Scott 956) that went from 45¢ to 85¢ in unused condition.

Many minor numbers for various Portuguese colonies that were listed for the first time in the 2021 Scott Classic Specialized Catalogue of Stamps and Covers 1840-1940 are now included in the 2022 Scott Standard catalog. The Number Additions, Deletions and Changes listing in this volume provides more insight regarding the new listings.

The Philippines received a close review, and approximately 2,800 value changes were made. The changes largely reflected strength in the market for Philippine stamps, with small increases noted for many issues. The 1951 set of three Liberty Holding Declaration of Human Rights stamps (Scott 572-574) increased from $3.20 to $3.75 in unused condition. A significant number of minor-number listings were added for souvenir sheets, and those new numbers are provided in the listing of number changes.

A line-by-line review of Pakistan took place, and almost 900 value changes, a mix of increases and decreases, were made. Some of the changes reflect a slight increase in the strength of the British pound.

We also suggest reading the catalog introduction in Vol. 5A, which includes an abundance of useful information.

Copies of the 2022 Scott Catalogue Volume 5 (Countries N-Sam) are available AmosAdvantage.com in both print and digital formats.