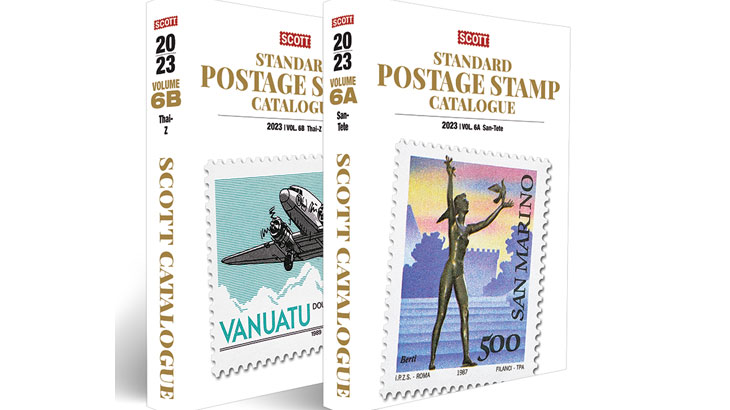 Vol. 6A (countries of the world San Marino through Tete) and Vol. 6B (Thailand through Z) of the 2023 Scott Standard Postage Stamp Catalogue are now available for purchase.

Another catalog season is upon us as we continue the journey of the 154-year history of the Scott catalogs. The 2023 volumes are the 179th edition of the Scott Standard Postage Stamp Catalogue.

This year’s Vol. 6A catalog cover features the San Marino 1987 500-lira Berti Sculpture stamp (Scott 1130) from a set of 10 stamps picturing sculptures from the Open-air Museum, and the Vol. 6B cover illustrates the Vanuatu 1989 45-vatu Douglas DC-3 stamp (Scott 502) from a set of four aircraft stamps issued to celebrate the Economic and Social Commission for Asia and the Pacific.

The Scott catalog editors worked tirelessly to stay up to date on new issues as best as possible in response to the worldwide transportation issues caused by the COVID-19 pandemic.

San Marino was looked at carefully. The more than 1,500 value changes, a mix of increases and decreases, were split fairly evenly between the classic and modern time periods. Overprinted stamps seem to be popular in general, and a couple of 1956 examples (Scott 373 and 374) showed slight increases. Each of these stamps moved from $4.25 in unused condition to $5.25.

The stamps of Tonga received a watchful eye from the Scott editors, who made approximately 1,300 value changes, many of which were slight decreases. A few of the airmail issues moved up, however. The pair of Watch airmail stamps from 1972 (Scott C117-C118) moved from $2.60 in unused and used condition last year to $6 both ways in the 2023 catalog.

Values for the stamps of the island nation of Tuvalu were also carefully reviewed, and approximately 1,800 value changes were made. A number of the changes were decreases. There were some decent increases made to some post-2000 stamp issues. One example was the 2019 Seabirds issue of a souvenir sheet of four (Scott 1456) and $7 souvenir sheet (1457) that moved from $13.50 and $9.50 in unused and used condition, respectively, to $16 and $11.50.

Approximately 800 value changes, an even mix of increases and decreases, were made for the southern African nation of Zambia. Among the increases were the 2006 Scouting Centennial sheet of four (Scott 1087) and souvenir sheet of one (1088) that moved from $6.50 unused and $3.25 used to $9 and $6.75, respectively. A few issues from 2004 that previously had dashes for values (because of insufficient market data) now have values assigned.

Many other countries received reviews that are not noted here.

Copies of the 2023 Scott Catalogue Volume 6 are available AmosAdvantage.com in both print and digital formats.