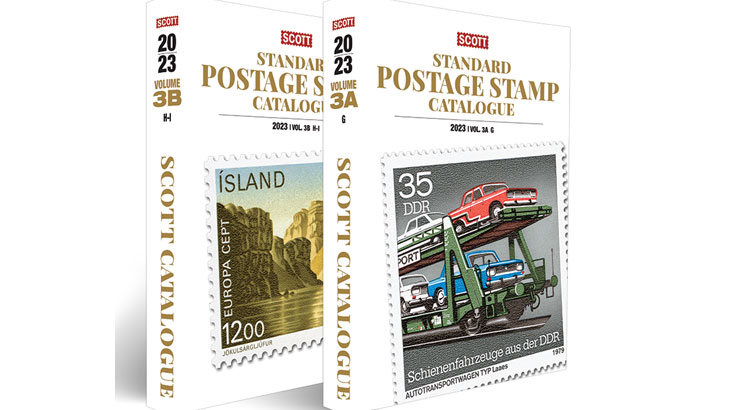 Vol. 3A (countries of the world with names that begin with the letter G) and Vol. 3B (H through I countries) of the 2023 Scott Standard Postage Stamp Catalogue are now available for purchase.

Another catalog season is upon us as we continue the journey of the 154-year history of the Scott catalogs. The 2023 volumes are the 179th edition of the Scott Standard Postage Stamp Catalogue. Volume 3A includes listings for countries of the world beginning with the letter G. Listings for countries of the world H through I can be found in Vol. 3B.

This year’s covers feature the German Democratic Republic 1979 35-pfennig Laaes Automobile Carrier stamp (Scott 2004) from a set of four illustrating railroad cars on the Vol. 3A catalog and the Iceland 1986 12-krona Jokulsargljufur stamp (Scott 623) from a Europa set of two picturing national parks on Vol. 3B.

Because Vol. 3B is a continuation of the first part of the Vol. 3 catalog, the introduction pages are not repeated in each volume.

Great Britain and related areas received a significant review for Vol. 3 with thousands of value changes made for all of the areas. For Great Britain, the review started post-1950 and went to date. A mix of increases and decreases, with more increases, was noted throughout. A standout in the review was the 1957-59 Queen Elizabeth II set of six minor varieties (Scott 317c-322d) that rose from $8.35 to $16.80 unused and from $9.10 to $14.60 used.

Some modern Great Britain issues saw noticeable increases. For example, the two 2019 Royal Navy Ships booklet stamps (Scott 3895-3896) almost doubled in value in unused condition from $5 each to $9.50 each.

Some new Great Britain errors were also listed for the first time, and a number of footnoted items were looked at and values adjusted accordingly.

A review of Alderney, Guernsey, Isle of Man and Jersey took place with thousands of value changes made, most of which were slight decreases in the 10 to 20 percent range.

Hong Kong was looked at with approximately 300 value changes made, many of which fell in the pre-1940 classic period. A mix of ups and downs was seen throughout. The set of 15 King Edward VII definitive stamps (Scott 71-85) was among the increases, with the unused value of the set moving from $2,781 to $2,933. A number of color-omitted error listings were added along with editorial footnotes for items that exist imperforate.

The classic period of Hungary was reviewed. There was a mix of increases and decreases, but many of the changes were the latter. The exception was for some used values of the first Hungarian stamps of 1871. The lilac 25-kreuzer Franz Josef I stamp (Scott 12) in used condition moved from $40 to $60.

Iceland received a full review with approximately 700 value changes made. Around 400 of the changes were for stamps in the classic period. A mix of increases and decreases was noted. Interest in surcharges likely helped the decision to change the value of the 1897 3-aurar on 5a green stamp (Scott 31), which jumped from $675 to $875 unused and from $575 to $650 used. For the modern period, some used values were updated to more accurately reflect the market.

Many other countries received reviews that are not noted in this letter. We encourage you to pay special attention to the Number Additions, Deletions and Changes listing.

Copies of the 2023 Scott Catalogue Volume 3 are available on AmosAdvantage.com in both print and digital formats.