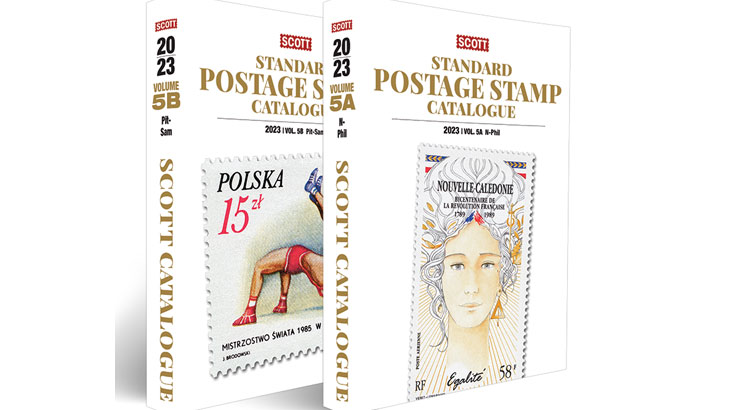 Vol. 5A (countries of the world Namibia through Philippines) and Vol. 5B (Pitcairn Islands through Samoa) of the 2023 Scott Standard Postage Stamp Catalogue are now available for purchase.

Another catalog season is upon us as we continue the journey of the 154-year history of the Scott catalogs. The 2023 volumes are the 179th edition of the Scott Standard Postage Stamp Catalogue. Volume 5A includes listings for the countries of the world Namibia through Philippines.

Listings for Pitcairn Islands through Samoa can be found in Volume 5B.

This year’s covers feature the New Caledonia 1989 58-franc French Revolution Bicentennial stamp (Scott 614) from a set of three with the themes of liberty, equality and fraternity on the Vol. 5A catalog and the Poland 1986 15-zloty Greco-Roman Wrestling stamp (Scott 2753) from a set of six victories of Polish athletes at the 1985 World Championships on Vol. 5B.

The time period in which we were working on this year’s catalog continued to be interrupted by the COVID-19 pandemic. In regard to new issues, stamps from some locations proved harder than usual to obtain because of transportation issues worldwide.

However, the Scott catalog editors worked tirelessly to stay up to date as best as possible.

The stamps of Nepal were reviewed with approximately 750 value changes made reflecting a mix of increases and decreases. One of the notable increases was for the 1-anna Sripech and Crossed Khurkis stamp (Scott 7) which moved from $50 in unused and used conditions to $90 and $120, respectively. One modern increase was for the 2013 Nepal Red Cross Society 50th anniversary stamp (908) that went from $2.25 to $2.75 in unused condition.

Namibia was reviewed with nearly 200 value changes made. One standout increase was a 1992 Views of Swakopmund souvenir sheet of four (Scott 717a) which went from 95¢ in unused condition and 70¢ used to $3.25 and $2.50, respectively. Some relatively recent stamp issues also showed slight increases, but slight decreases also were noted in between 1992 to 2003.

The stamps of Nigeria were looked at closely with approximately 100 value changes made that showed both increases and decreases. The 1986 set of 14 stamps (Scott 488-500) moved from $5.85 in unused condition to $7.10. This set of stamps features many different themes including an image of a Volkswagen Automobile Assembly Factory, to telephone operators, and a stamp showing coconut harvesting.

Pitcairn Islands was reviewed with slightly more than 300 value changes made, nearly a third of which were increases. Among the increases was for the first set of 10 stamps from 1940-51 (Scott 1-8 that includes two lettered major numbers) that went from $66.75 to $84.75 in unused condition and in used condition from $29.60 to $41.05.

The stamps of Rwanda were looked at closely and nearly 600 value changes were made, mostly slight decreases. One of the exceptions was for the 1967 Cogwheels souvenir sheets, valued at $4.50 each in unused and used condition, that were bumped up slightly to $4.75 each, respectively.

A look at the stamps Philippines netted approximately 100 value changes. Editorially, a few sheets received status upgrades to a minor letter listing status. Those are listed in the Number Additions page in this volume.

The countries of New Caledonia and French New Hebrides were also reviewed with a handful of value changes made across both.

Many other countries received reviews that are not noted in this letter. We encourage you to pay special attention to the Number Additions, Deletions and Changes listing. We also suggest reading the catalog introduction, which includes an abundance of useful information.

Copies of the 2023 Scott Catalogue Volume 5 are available on AmosAdvantage.com in both print and digital formats.