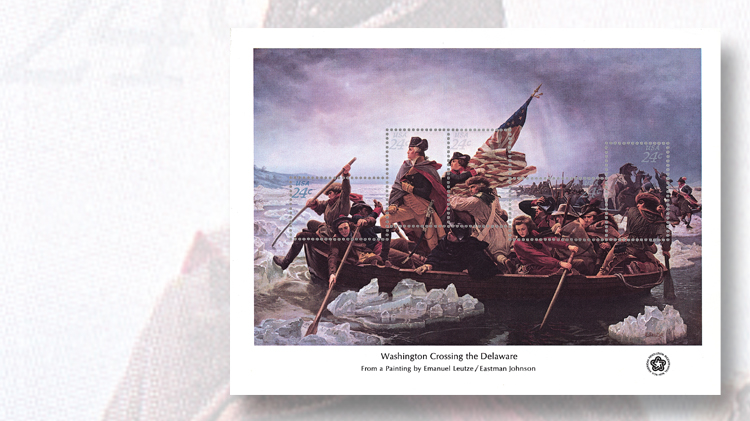 The Washington Crossing the Delaware souvenir sheet of five se-tenant (side-by-side) 24¢ stamps was issued in 1976 for the United States Bicentennial. 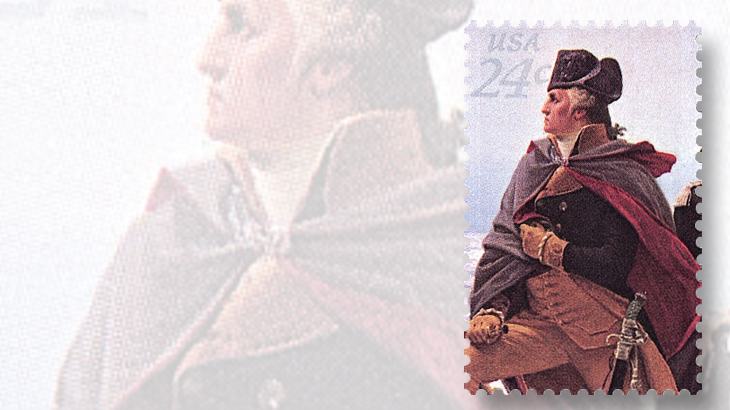 The cartoon caption contest for June features the 24¢ stamp picturing Washington’s crossing of the Delaware from a 1976 Bicenntennial souvenir sheet based on the famous painting. Put yourself in the general’s cloak, and tell me what he might be thinking o
Previous
Next

As spring turns to summer, picturing oneself in a cooler situation can be pleasant. For the June cartoon caption contest this month, we promote this preoccupation by using a stamp picturing Gen. George Washington crossing the ice-clogged Delaware River in late December 1776, on his way to a surprise attack on the Hessian forces in Trenton, N.J.

This 24¢ stamp (Scott 1688b) is the second stamp of five in the 1976 Bicentennial souvenir sheet based on the painting Washington Crossing the Delaware by Emanuel Leutze.

This painting supports Washington’s reputation for being bold, in charge, and the leader upon whom the success of the American Revolution depended.

So, your challenge for this month’s cartoon caption contest is to put yourself in General Washington’s cloak, and to feel the cold, and the pressure of the need for military successes to drive the British forces out of the American Colonies.

As you chill out, tell me what you might be saying or thinking about the coming battle. Of course, you can also reflect on anything else that occurs to you: the ice floes; Washington’s constant petitioning of the Congress for the money, men, and supplies that he needed for military campaigns; or comments on philately, politics, or the military arts of the present day.

To be considered for the prizes, entries must reach me no later than June 23.