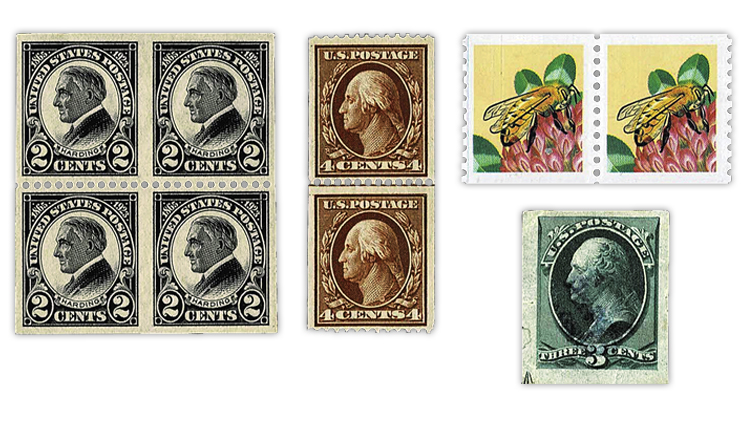 Figure 1. Stamps such as these are often submitted to expertizers as being hoped-for varieties with substantial catalog value. None of the examples pictured here are genuine: a vertically imperf 1923 2¢ black Harding memorial stamp, a 1910 4¢ Washington coil line pair, a 1985 25¢ Honeybee coil missing color, and an imperforate 3¢ Washington from 1873. More often than not, such stamps, once examined carefully by expertizers, do not qualify as being the rare variety, as is the case with these examples. 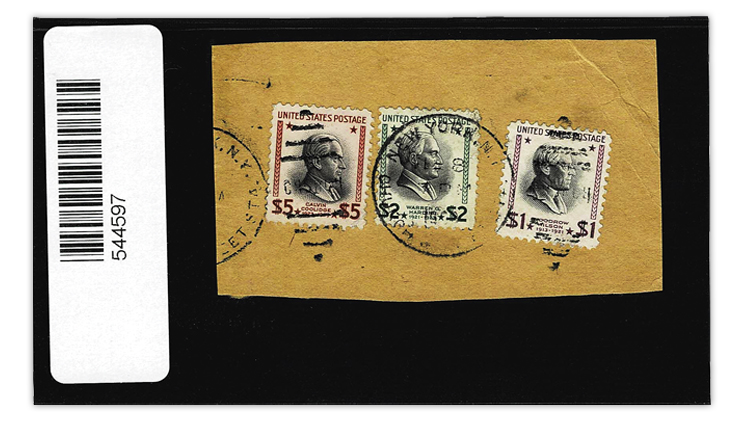 Figure 2. Is the 1938 $5 Coolidge Presidential issue stamp used on this piece the scarce red brown and black variety (Scott 834a)? The Philatelic Foundation says no. 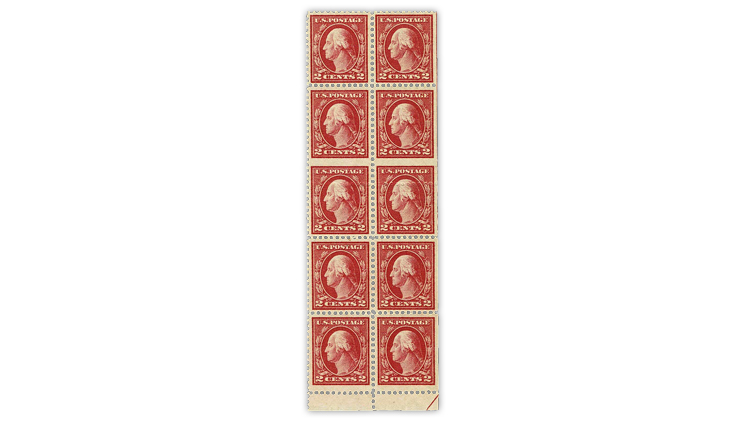 Figure 3. At first glance this block of 1917 2¢ rose Washington type I stamps appears to contain two vertical imperforate-between pairs, but it is an optical illusion caused by a wandering wheel of perforating pins. Upon closer inspection, the row of horizontal perforations that look like they are missing is found 7 millimeters from the top of the bottom stamps of the pairs.
Previous
Next

In response to these columns on expertizing, I have received several recent inquiries asking when it is worthwhile to expertize a stamp (or cover), and how to go about it once you decide to have it done.

Going on the theory that once a question is asked by three or more people, many more have it in mind, I have decided to devote this column to the first part of the subject: When is it worthwhile to have an item expertized?

First let’s establish that the cash value of a stamp is not the only reason to have it expertized. That is perhaps the most cited criterion when a collector wants to establish the identity of a stamp, as well as its soundness and condition, beyond dispute before buying it or selling it.

We can all understand wanting a certificate when it comes to buying a stamp. Who wants to write a big check for a dud? But selling? Experienced sellers know that offering a stamp with a certificate stating that it is genuine and without faults makes the stamp more salable. And that often justifies a higher sticker price or a higher price at auction that will cover the cost of the expertizing certificate.

In fact, the smart seller will even go to the trouble of replacing an old certificate with a current one because knowledge and technology have advanced, and because certificates from even 10 years ago are not always trusted by today’s collectors.

It is understandable that a collector will want to be absolutely certain that the stamp she or he is considering for that empty space in the album is as pristine as it looks, or if the stamp has been altered in some way, that the price has been discounted to an appropriate level.

But a stamp does not have to be expensive for a collector to want that degree of specificity. Some collectors will go to the expense of having a stamp valued at the Scott minimum of 25¢ expertized. Why? Because they suspect it may be a reprint or that an overprint is not genuine, or they are having trouble identifying it due to watermarks, perforation measurements or color names used in a catalog.

What one collector might consider an extravagance, another sees as a means of achieving certainty, while recognizing that certainty has a price.

Other collectors will know enough to identify the possibility that a given stamp might be the valuable version of what is otherwise a pedestrian stamp. How to be certain? Submit the stamp for expertizing.

Figure 1 shows several stamps of the types that are regularly submitted for expertizing by collectors who hope that they have found a needle in a haystack. Most often, the submission represents the triumph of hope over reality.

Just because I am an expertizer does not mean that I am immune from this. I have submitted items outside my areas of expertise because I thought they might have a chance of being the real things. Though I have had an occasional win, my hopes have been dashed more often than not. Yet it has been worth it to me to know for certain.

I bought the piece while on a trip because to me it resembled the scarce $5 red brown and black variety (Scott 834a). I don’t own this variety and have only photos of genuine examples. Even though I thought this on-piece example was iffy, after I returned home, I sent it in for expertization anyway.

Scott values a mint example at $3,000 value (in italics indicating a stamp that can be difficult to value accurately), and a whopping $7,000 (also in italics) for a used example.

As I feared, it came back from the Philatelic Foundation identified as “Scott 834, Carmine and Black, The Carmine color oxidized.” Hope over reality indeed!

In this case I knew one person whom I thought might be able to buttress my hope — or dash it — but when I showed it to him, he declined to offer an opinion. So I was left with applying for a certificate. The first expertizing service I sent it to also declined an opinion.

The Foundation was my third attempt to get closure. Unfortunately it ruled against the item.

I offer two methods of saving yourself the expertizing fee for items that are in the hope-versus-reality class. The object of using these resources is to save yourself the fee if the item is a sure loser.

The first method is to use online libraries of items submitted for expertization in recent years. The Philatelic Foundation and the American Philatelic Expertizing Service, often called APEX, maintain such libraries. The items can be accessed by catalog number, and the entry includes a photograph of the item.

Because negative certificates are not always kept by unhappy owners, it can be worth your while to check to see if the item you are considering to submit for expertization has already been through the process with negative results.

The other resource is knowledgeable friends at your local stamp club and dealers at a nearby bourse or stamp show. Such people can often give you a provisional opinion as to whether what you have has enough chance to be genuine to be worth the cost of submission for expertizing.

Sometimes the friend or dealer can rule out the item based on a brief look and a lifetime of experience. If they can also explain why, so much the better.

If the response is “I think it is genuine,” I recommend that you submit the item for expertization. Be a bit more discriminating if the response is that the item has a decent chance of passing muster. In either case, the decision is yours, and you don’t have the alternative of dunning your advisor for the fee if the item turns out to be bad.

In the next expertizing column, I plan to look at the big four experizing services, and provide information on how to contact them, the forms they use, the services they offer, and their fee structures.

A reader asked this question: “I have a block of 2¢ Washingtons, Scott 499, with a row of blind perfs 7mm below the center. Does this disqualify it being considered the imperf between that is listed for this stamp?” See Figure 3 for my own example of this variety of the 1917 2¢ rose Washington type I.

Yes, without question this is not a vertical pair of stamps with no perforations between, listed as Scott 499c.

Specialists know that the sixth row of horizontal pins on lower panes of 100 of the 2¢ Washington and 20¢ Franklin stamps was affected on part of what was probably less than a day’s production of these stamps.

A similar variety exists on the 2¢ stamp with the seventh vertical row of perfs displaced on some panes. The pins impressed the paper but did not go through it because the die wheel did not wander with the pin wheel.

So you need to look carefully to see if there are pin impressions, which are called “blind perfs” by specialists.

The term “imperf between” as used by Scott editors presupposes that there are no holes or blind perfs anywhere within the two stamps that make up the pair.