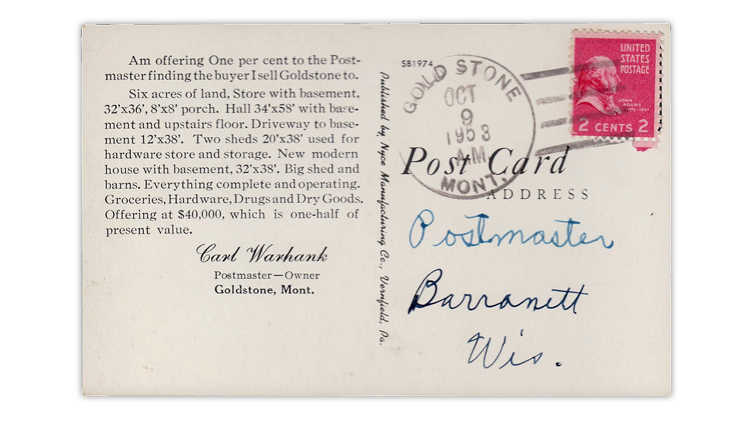 The postmaster of Gold Stone, Mont., attempted to sell his town in 1953, offering various other postmasters a 1 percent commission for their troubles if a buyer was located.

The April 8 issue of Linn’s Stamp News just landed on the presses and goes in the mail to subscribers Monday, March 25. And if you subscribe to Linn’s digital edition, you’re at the head of the line with early access Saturday, March 23. Here are three stories you'll want to check out.

When the postmaster tried to sell the town

The Odd Lot columnist Wayne L. Youngblood writes about the attempted sale of Gold Stone, Mont. In 1953, the community’s “postmaster—owner,” Carl Warhank, offered a bounty of 1 percent to any postmaster who would help him locate a buyer for the town.

In each weekly issue of Linn’s, either E. Rawolik VI or E. Rawolik VII analyze the content of a stamp mixture offered to collectors. E. Rawolik, of course, is a pseudonym that is also the word “kiloware” (a stamp mixture) spelled backward. This week, E. Rawolik VI reviews a mixture from Jungman (New York). He writes: “Jungman offered to send 75 different stamps from the 19th century for only $6. I was curious, so I sent in the required payment.” Read the full review in this issue.

When requests for domestic U.S. airmail were insufficiently prepaid

The Modern U.S. Mail column in the Feb. 11 Linn’s Stamp News looked at the handling of United States mail intended for international airmail service but insufficiently franked with postage. This month’s column concerns shortpaid U.S. domestic airmail that is labeled “Not in Air Mail” — that is, shortpaid domestic mail intended for airmail service that instead was given surface service.