Graphically cropped from an uncacheted FDC is this cancellation that shows a date of Oct. 8, 1926 — 10 days before the actual issue date. It appears to be a defective cancellation device rather than an early use. 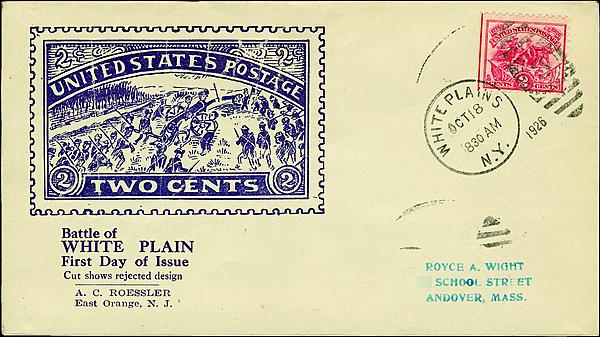 An A.C. Roessler cover featuring a design similar to one of the rejected images for the 1926 Battle of White Plains stamp issue. 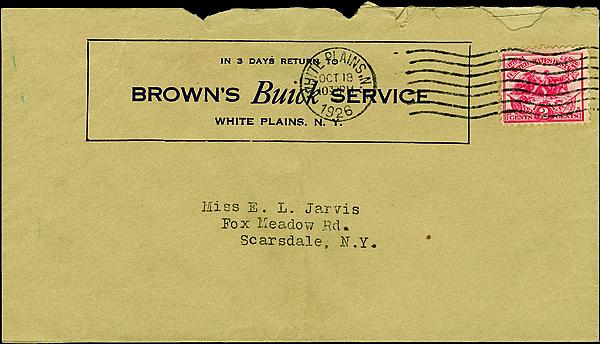 What appears to be ordinary business mail is this cover dated Oct. 18, 1926, the first day of issue for the 2¢ Battle of White Plains stamp. 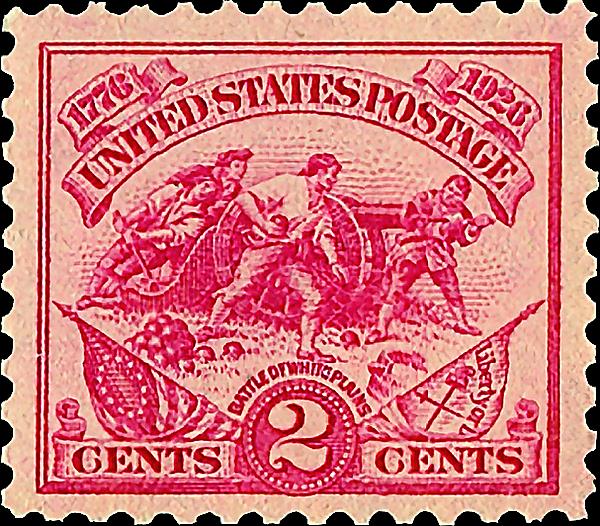 Seldom are the reasons behind a postage stamp proposal revealed to stamp collectors in the proposer’s own words.

But thanks to U.S. Stamp Notes reader E. Harrison of Las Vegas, Nev., the cover pictured here provides us with a sneak peek into the thoughts of the man who proposed the 2¢ Battle of White Plains issue of 1926.

It would be easy to miss the fact that the cover is canceled on the first day of issue for the stamp, Oct. 18, 1926, as it appears to be business mail.

Inside was a letter that reads as follows:

“For your information the stamp on this envelope is to commemorate the 150th Anniversary of the Battle of White Plains. It is being mailed to you the first day the stamps are on sale. If this envelope with stamp and cancellation date is kept intact, in a few years it will have a value many times its cost.

“The idea of this commemorative stamp was conceived by the writer, who was appointed by the Chamber of Commerce, the Chairman of a committee to get the Postmaster General to issue this stamp.

“There were six additional members to the committee and with the cooperation of the Congressman, the Senator and our good Col. William Muldoon, the stamp was assured after three trips to Washington and one to New York.

“We believe this a fine thing in an educational way for young stamp collectors, and it should do White Plains no small amount of good will to have at least 20 million of these stamps which is the first issue, put on sale in White Plains and surrounding towns.

Curiously, Fred Brown’s role is not mentioned in the narrative for this issue in Max Johl’s landmark work, The U.S. Commemorative Stamps of the 20th Century, which states:

“At a meeting of the White Plains, N.Y. Chamber of Commerce held during the spring of 1926, a resolution was passed petitioning the Post Office Department to issue a stamp to commemorate the battle of White Plains…

“A committee was appointed and they, together with Representative Wainwright and Senator Wadsworth, presented the petition to Postmaster General Harry S. New … ”

“Dr. Jason S. Parker, a well known philatelist, was a member of the committee, and it was largely due to his enthusiasm that the committee carried on and ultimately received the approval of the Postmaster General for the White Plains stamp.”

The Johl write-up does show five rejected designs for the White Plains stamp. Among them is one very close to the rejected design on an A.C. Roessler cover. It is by Bureau of Engraving and Printing staff designer C.A. Huston, and Roessler’s version is only a crude rendering. In addition, as can be seen, Roessler made an error in titling the stamp, calling it “Battle of White Plain.”

Finally, note the graphically cropped cover which appears to be a very early pre-first-day cover, dated Oct. 8, 1926, rather than Oct. 18. I believe this is a case of a defective cancel device, because there is just a hint of the base of a “1” in both the postmark on the envelope and the postmark on the block of stamps.