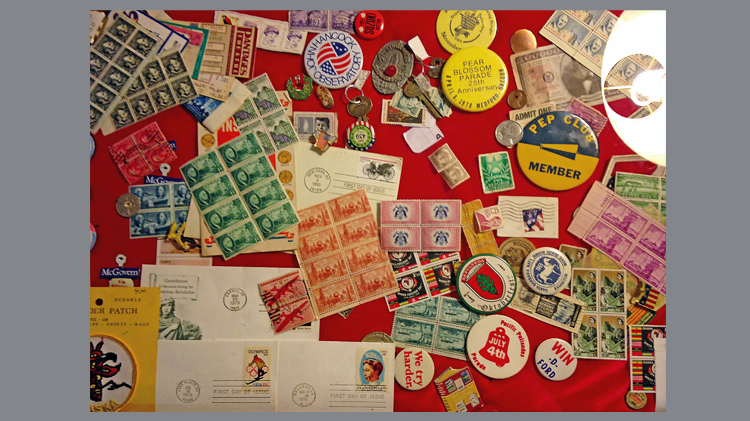 Postage stamps, covers, political buttons and other small items were displayed in a case at an antique shop in Orange County, Calif.

In a collector’s mind, the thrill of the hunt is always on.

That explains why the A&E television network does so well with its Storage Wars series, and how History, another network, has found success with Pawn Stars and American Pickers.

These shows offer an element of suspense — the hope that a found object will be something rare, interesting or just plain fun.

In October I visited southern California and stopped in at a number of antique shops in Orange County.

I typically gravitate to the boxes of postcards, often turning them around to see the stamp side and then thumbing through. I look at the stamps and the postmarks, and sometimes an unusual auxiliary marking jumps out at me.

Other items that might be encountered include vintage mailboxes, stamp vending machines, toy mail vehicles and stamp yearbooks.

A fellow collector once told me that in a consignment shop he found about 10 of the annual yearbooks published by the United States Postal Service, priced at $6 each. Each book was filled with mint stamps for that year, some totaling more than $50 in face value. I wish I had that sort of luck.

At one store on my recent trip, I encountered a locked display case that did an interesting job of showcasing stamps, first-day covers, political buttons and other items. I assume it was locked because the case contained small items — it didn’t need to be locked up because of value, at least on the stamp side. Many of the stamps inside were very common, and I even spotted a used 44¢ United States Flag stamp from 2009. Still, it was an attractive way to showcase these items.

But it got me thinking: Have any Linn’s readers encountered a similar display at an antique store, garage sale or consignent shop only to find a gem standing out in the mix?

If so, drop me a line with a short description of what you found, and a photo or scan of the item, if possible.

You can email me, or send a note by postal mail addressed to Jay Bigalke, Linn’s Stamp News Editorial, Box 4129, Sidney, OH 45365.

Try to keep your story to finds at antique stores or consignment shops, and not discoveries at stamp shows, auctions or online.

Perhaps for a future Philatelic Foreword column I will write up some of the interesting responses I receive.