Who was the real Rosie the Riveter? Two stamps depict two versions 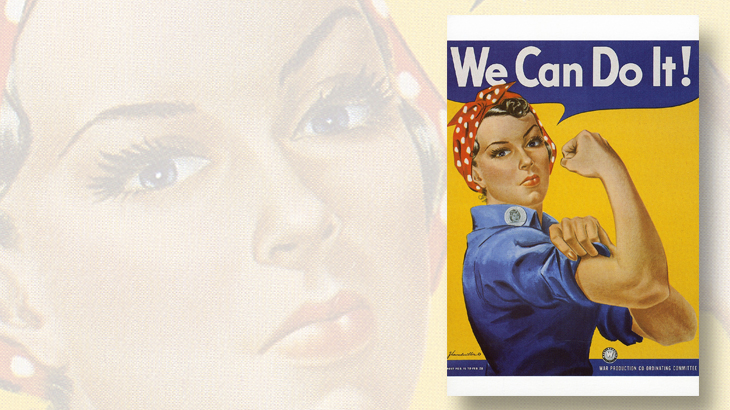 The Rosie stamp in the Celebrate the Century series was modeled on this Westinghouse poster, based on a photograph of Geraldine Hoff Doyle (1924-2010), who was living at the time the stamp was issued in 1999. 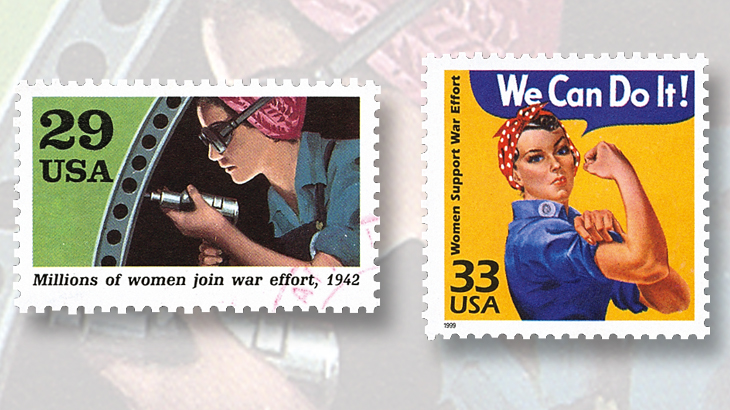 The first appearance of a Rosie the Riveter image on a United States stamp was in 1992. There was no model for this stamp. The second Rosie stamp was issued in 1999. 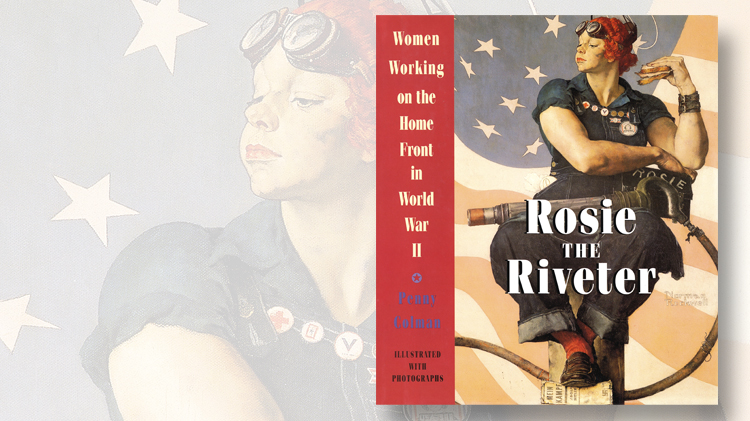 Perhaps the next Rosie to be on a U.S. stamp at some future time is this image painted by Norman Rockwell, using 19-year-old Vermont native Mary Doyle Keefe (1924-2015) as the model. This artwork was used for the cover of the book Rosie the Riveter — Women Working on the Home Front in World War II by Penny Colman.
Previous
Next

Two versions of Rosie, the iconic female World War II worker who replaced men gone off to war, have been shown on United States stamps.

The series comprised five panes of 10 stamps each, a pane for each of the five years of U.S. military involvement in the hostilities.

Because the stamps for these panes were horizontal, the Rosie that is most recognizable today was not appropriate. This Rosie appeared in the poster created for nationwide distribution by the War Production Coordinating Committee of Westinghouse.

Note that it is headed “We Can Do It!”, and there is no reference to Rosie the Riveter.

The woman in the poster is known to have been modeled on a United Press International photo of Geraldine Hoff Doyle (1924-2010) of Ann Arbor, Mich.

Doyle’s poster did make it onto a stamp, as part of the 1940s Celebrate the Century pane issued in 1999 (Scott 3186e). Again, there was no reference to Rosie.

So, where did that name come from?

In the early 1940s, Redd Evans and John Jacob Loeb composed the song Rosie the Riveter. It became a national hit, and eventually the name became associated with the We Can Do It! poster.

Meanwhile, Norman Rockwell did a cover for the May 29, 1944, issue of The Saturday Evening Post with an illustration of a muscular red-headed riveter with the name “Rosie” painted on the lunch pail.

Rockwell was well-known for using live models to pose for photographs from which he painted his figures. In this case, the model was Mary Doyle Keefe (1924-2015), then a 19-year-old high school senior and part-time telephone operator in Arlington, Vt.

Ms. Keefe recently passed away at age 92. Although Keefe was petite and never riveted in her life, Rockwell’s Rosie was broad-shouldered, with muscular arms and large hands.

He modeled Rosie’s body on Michelangelo’s Isaiah, on the ceiling of the Sistine Chapel.

Keefe reflected on the sitting in a 2002 Associated Press interview: “You sit there and he takes all these pictures. They called me again to come back because he wanted me in a blue shirt and asked if I could wear penny loafers.”

She was paid $5 for each of the sittings.

Twenty-four years after she posed, Rockwell sent her a letter calling her the most beautiful woman he’d ever seen and apologizing for the hefty body in the painting.

Want to bet that Rockwell’s Rosie will one day grace a U.S. stamp?

An excellent reference on the Rosie phenomenon is Rosie the Riveter — Women Working on the Home Front in World War II by Penny Colman, published in 1995.