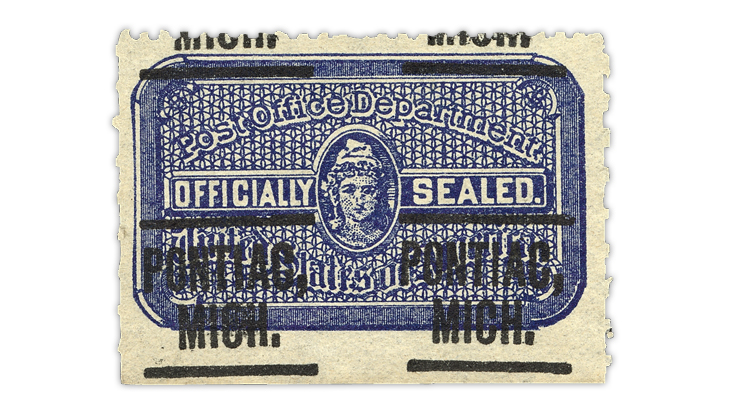 Why bother precanceling an officially sealed label, as was done in Pontiac, Mich., with this example of Scott OX15?

The last place you would expect to find a precancel is on an officially sealed label. Listed in the Scott Specialized Catalog of United States Stamps and Covers with an OX prefix, they are in the Post Office Seals section.

The introduction to that section says: "Official Seals began to appear in 1872. They do not express any value, having no franking power."

After discussing registry seals, the introduction continues, "Beginning in 1877 (No. OX1 and later), Post Office Seals were used to repair damaged letters, reseal those opened by mistake or by customs inspectors, and to seal letters received by the Post Office unsealed."

These labels include the words "Officially Sealed" in the center of the design.

In nearly 70 years of collecting, I’ve never seen a precancel on one of these officially sealed labels, and there is a good reason.

While regular postage stamps and even postage due stamps need to be invalidated by cancellation to prevent reuse, that isn’t true for officially sealed labels. In fact, they have no postal value so a precancellation seems to be superfluous.

On the other hand, there is no damage done by precanceling an officially sealed label. Certainly, it identifies the location where it was added after inspection of an envelope or damage to an envelope.

In the example shown, a precancel from Pontiac, Mich., is on Scott OX15, the 1913 issue perforated gauge 12 with the hyphen hole 6½.