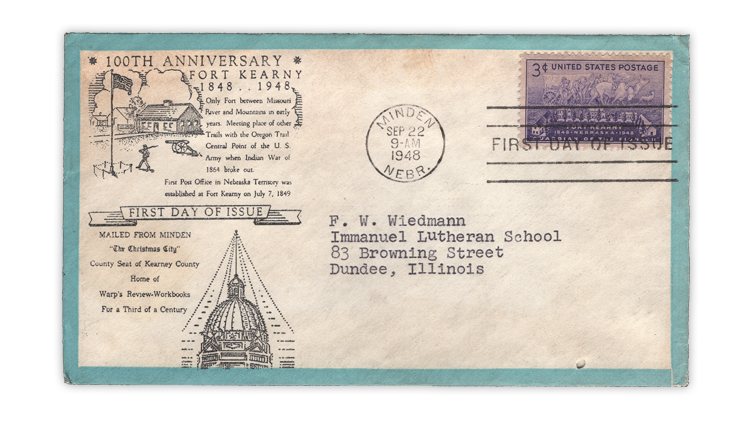 How hard do you have to look to find a Christmas connection on a philatelic item? You need a magnifier to see the connection on the first-day cover shown here for the 3¢ purple Fort Kearny stamp (Scott 970) issued Sept. 22, 1948.

Both the stamp and the cover commemorate the 100th anniversary of the fort.

Where is Fort Kearny, and why did it deserve the honor of a postage stamp?

The cachet on the cover lists the reasons: “Only Fort between Missouri River and Mountana [sic] in early years. Meeting place of other Trails with the Oregon Trail. Central Point of the U.S. Army when Indian War of 1864 broke out. First Post Office in Nebraska Territory was established at Fort Kearny on July 7, 1849.”

The cover bears a first-day cancel from Minden, Neb., which the cachet tells us is “The Christmas City,” revealing the Christmas connection.

This seldom-seen cachet was sponsored by the Warp Publishing Co. of Minden, which according to an enclosure “pioneered numerous books of poems and other helpful material for teachers.”

Another enclosure explains how Minden came to be called the Christmas City: “There was a time when Minden, only a few miles from where Fort Kearny stood, was dark and inadequately lighted. Then Minden, perceiving the effect of light, began expressing its pioneer spirit in lights. … The lights in old Fort Kearny signified the hopes of the pioneers that a day would come that would be a better day — a day when comfort, peace, serenity, prosperity would rule. No less do the lights at Minden each Christmas signify the same thing. …”

Indeed, Minden, which now bills itself as “Nebraska’s Christmas City” puts up over 12,000 lights in its courthouse square each year, about four times the number of city residents. It has done so since 1915, more than 100 years.

Minden also presents an annual pageant titled The Light of the World and is happy to welcome visitors to enjoy the show.