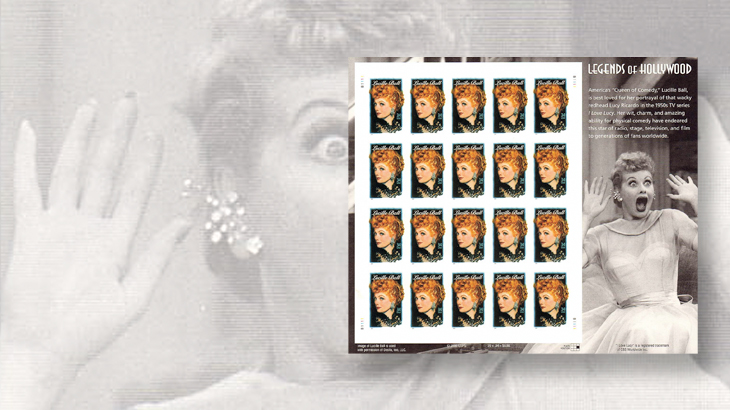 A full self-adhesive pane of the 2001 34¢ Lucille Ball error with die cuts omitted is being offered during the Oct. 3-4 Regency-Superior auction in Los Angeles, Calif. 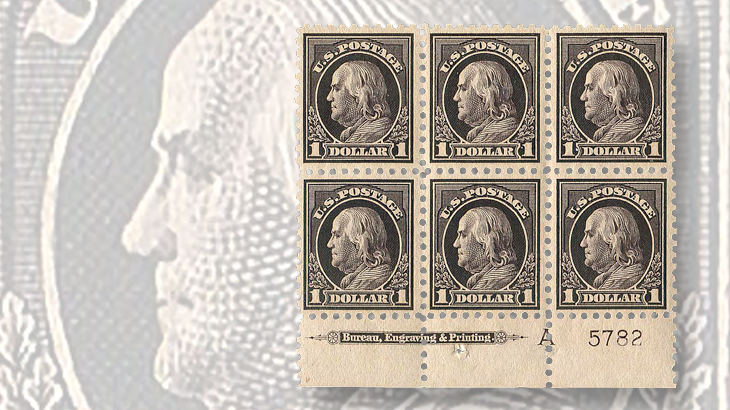 United States plate blocks have a strong showing in the Oct. 3-4 Regency-Superior auction to be conducted at the Sescal stamp show in Los Angeles, Calif. The 1915 $1 Franklin bottom plate block of six with the Bureau of Engraving and Printing imprint show
Previous
Next

Regency-Superior will conduct its stamps, coins and autographs auction No. 114 at the Hilton Los Angeles Airport Hotel, 5711 W. Century Blvd., in Los Angeles.

The sale is taking place Oct. 3-4 during the 71st annual Sescal stamp show and exhibition at the same location.

Regency-Superior, the official auctioneer for the show, will offer United States and worldwide single stamps, multiples, covers and large lots, with plate blocks, back of the book material and much more.

The U.S. plate block selection begins with the 19th century and includes issues from the 1893 Columbian Exposition set, the 1898 Trans-Mississippi Exposition set and the 1901 Pan-Americans.

The margin paper below the stamps includes the imprint of the Bureau of Engraving and Printing, the letter “A” and the plate No. 5782.

The mint plate block of six for the 1915 $1 stamp carries a value of $20,000 in the 2015 Scott Specialized Catalogue of United States Stamps and Covers, with the value listed in italics, which indicates that the item is one that trades infrequently.

Another multiple offered from the same era is the famous 1917 5¢ carmine Washington error (Scott 485) presented as a vertical pair centered in a block of 12 where the surrounding stamps are the properly denominated 2¢ carmine issues (Scott 482).

The error in this case was created when the 5¢ transfer roll was inadvertently used to re-enter the stamp subjects on the plate.

The block of 12 format is popular for this error issue, but the blocks aren’t often found never hinged, and as a result, these mint examples enjoy a significant premium.

Describing the item as a seldom-offered showpiece, “one of the great rarities in exceptional condition,” Regency-Superior has it listed with a $35,000 estimate, opening at $26,000.

There is an attractive example of the 1901 4¢ deep red-brown and black Pan-American stamp with center inverted (Scott 296a), and a number of more recent errors, freaks and oddities.

Among these is a complete 34¢ Lucille Ball pane of 20 self-adhesive stamps from 2001 with die-cutting omitted.

Printed and issued well before the U.S. Postal Service began its program of issuing intentionally imperforate stamps in uncut press sheets, this is a genuine error from the popular Legends of Hollywood series, with seven panes known, according to the 2014 16th edition of the Scott Catalogue of Errors on U.S. Postage Stamps by Stephen R. Datz.

That catalog and the 2015 Scott U.S. Specialized catalog both list the stamp with a value of $800 for an imperforate pair. Regency-Superior uses this figure to propose an estimate of $6,000 and an opening bid of $4,000.

The auction also offers many different U.S. back-of-the-book items, beginning with the first airmails and including singles and multiples of the 1930 and 1933 Zeppelin airmails, special delivery stamps, postage dues, Official stamps and more.

Among the postal history offerings is a $5 Columbian solo franking on a local cover postmarked in New York City on April 13, 1894, offered with a 2008 Philatelic Foundation Certificate, and estimated at $5,000 with an opening bid of $4,000.

The catalog for this Regency-Superior auction can be viewed online, either as a catalog with pages to flip, or an online listing that can be ordered by lot number, price or bidding activity.

The catalogs and bidding information are available from the Regency-Superior website.