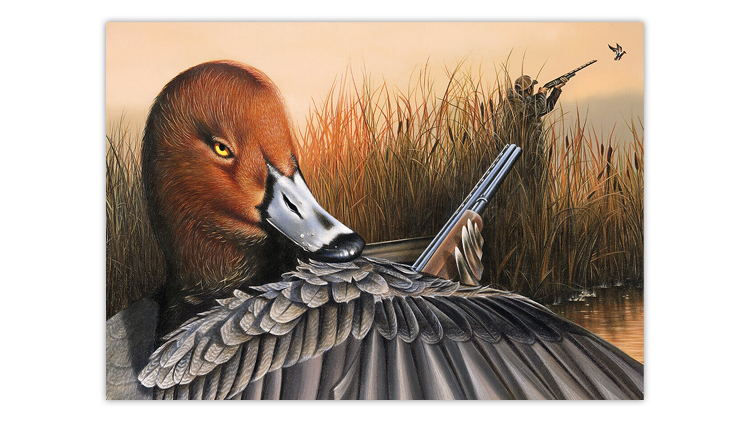 This Josie Morway painting titled Duck Hunting Hunters was entered into the 2021 federal duck stamp contest. It was one of five joke entries created by the HBO show Last Week Tonight with John Oliver.

Sometimes you have to respect a good prank — especially one that took a lot of effort, creativity and waiting.

The HBO television show Last Week Tonight with John Oliver at the end of September included a 12-minute segment devoted completely to the federal duck stamp contest. The results of that contest are in the Oct. 25 issue of Linn’s.

Oliver provided lots of background on how the duck stamp program works, especially the art contest, and dove into the recent rule that the Trump administration put in place requiring a nonduck related element be part of the artwork.

Near the end of the segment, Oliver revealed that he had commissioned and entered five paintings into the contest as a joke, all of them providing an extreme take on the nonduck element part of the requirement.

And lastly, if you want to see the segment, be prepared for inappropriate language and content. It can be found on the show’s YouTube channel.