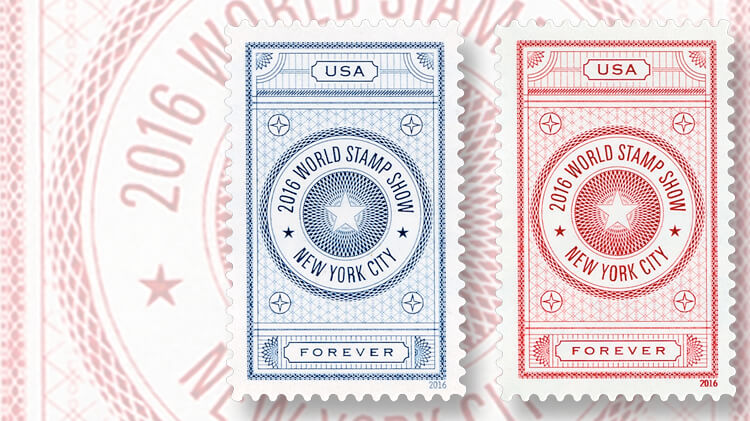 Stamp poll voters rejected the second set of two stamps for World Stamp Show-NY 2016. The set was picked as the worst-designed commemorative, and placed third as the least necessary commemorative. 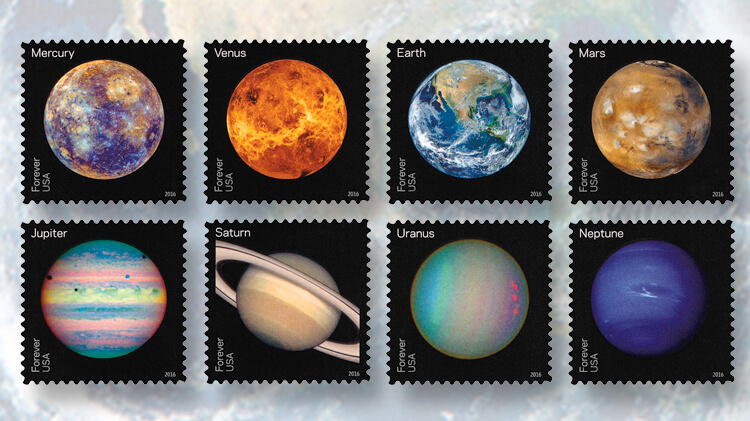 Collectors chose the eight-stamp Views of Our Planets set as having the best design among 2016 United States commemorative issues. The set was also chosen as the overall favorite among youngsters who voted in this year’s poll. The stamps were issued May 31, 2016, during World Stamp Show-NY 2016. 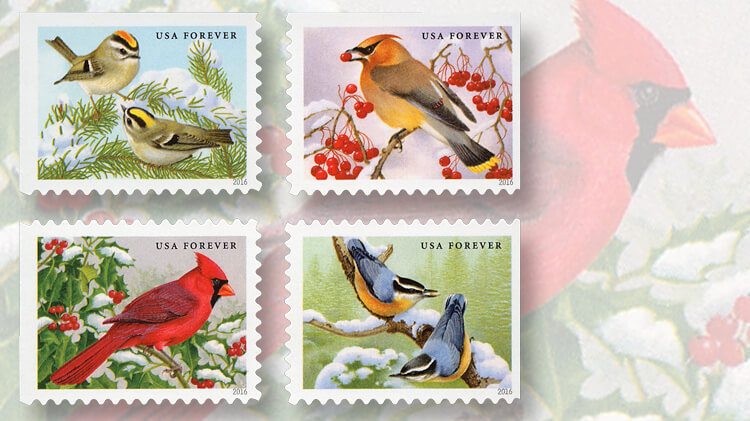 The winner of the best design for definitive stamps was the Songbirds in Snow set of four. The Songbirds set also placed fourth in general voting for the overall favorite issue of 2016. 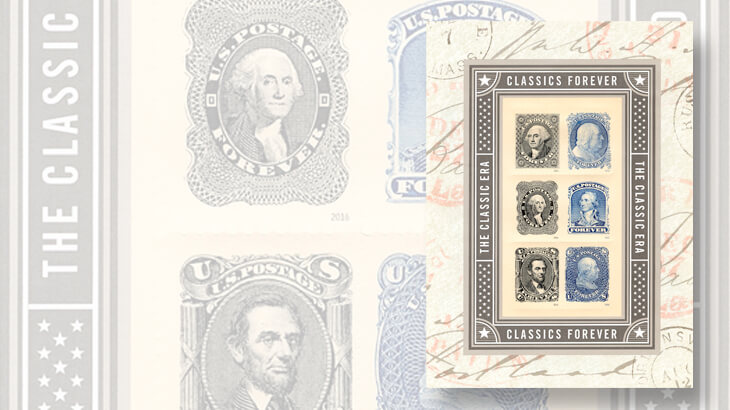 The Classics Forever set of six forever stamps was the overall favorite of Linn’s Stamp News readers who voted in the 2016 Linn’s U.S. Stamp Popularity Poll.
Previous
Next

You can’t beat the classics.

Stamp collectors in the United States are known for cherishing classic U.S. stamps with line-engraved designs, and that affection has shown itself in the results of the 2016 Linn’s Stamp News U.S. Stamp Popularity Poll.

The set of six stamps known as Classics Forever was selected by Linn’s readers as the overall best stamp issue of 2016.

These nondenominated forever stamps reproducing the designs of six classic American stamps won top honors by a comfortable margin, but they did so without taking either the best design or most important commemorative stamp categories in the 2016 poll.

Voters have once again chosen a set with multiple designs as the best of the year, rather than a single-design stamp. Only three times since the favorite stamp category was established in 1984 has a single-design issue been picked as the overall favorite.

The runner-up, with 328 votes, was the National Parks set of 16 different stamps honoring various U.S. national parks from across the country and commemorating the establishment of the National Park Service during the administration of President Woodrow Wilson in 1916.

Coming in third as overall favorite was the Views of Our Planets set of eight stamps showing full-color photographs of each of the eight planets in the solar system.

One unusual fact about the top three vote-getters in the overall best stamp category is that the three winners were issued on consecutive days in 2016: Views of Our Planet on May 31, Classics Forever on June 1, and National Parks on June 2. All three debuted in ceremonies at World Stamp Show-NY 2016, the international stamp show held May 28-June 4, 2016, in New York City.

The number of online votes increased significantly, however, with more than 1,500 votes received via Linns.com.

Mail-in ballots and online votes were accepted from mid-December 2016 through March 1, 2017. The ballot was published weekly in Linn’s during the voting period.

The tables provided here list the poll results for the overall favorite and for two specific stamp categories: commemorative stamps, and definitive and special stamps.

There was no voting for postal stationery in the 2016 poll because only one stationery issue, the La Cueva del Indio stamped envelope for Priority Express Mail, had been announced before the end of the year.

Linn’s reported in the Jan. 23 issue that a new No. 10-size Northern Cardinal stamped envelope was purchased in a pack of 12 in an Ohio post office in December. The discovery came well after the 2016 stamp poll was underway. The U.S. Postal Service later released a statement that the stamped envelope had been issued unannounced on Nov. 3, 2016.

A separate section on the ballot was reserved for the voter’s overall favorite 2016 stamp.

This year’s balloting saw a nice increase in the number of votes identified as being submitted by youngsters. Last year’s youth vote brought in 204 mail-in ballots, but this year Linn’s received 262 votes from young collectors, an increase of more than 28 percent.

Youth votes are counted equally with all other votes, but they also are looked at separately by Linn’s editors to gauge how youngsters view the U.S. stamp program.

The winner for youth overall favorite, with 41 votes, was the View of Our Planets set of eight stamps.

The Pets set of 20 stamps came in second in the youth voting, with 33 votes, and third place was captured by the five-stamp Soda Fountain Favorites set.

The fourth favorite among youngsters was the Wonder Woman set of four stamps, which did not fare well in the general voting.

It’s also worth noting that the Classics Forever issue, which won the overall favorite issue in general voting, received only one vote for overall favorite among those identified as youth voters. However, that same set was the top youth vote-getter in the most important commemorative category, with 37 votes. Service Cross Medals placed a close second, with 36 votes, and Views of Our Planets took third, with 19 votes.

The Views of Our Planets set was also picked by younger voters as the best designed commemorative issue, with 67 votes.

In general voting, the Views of Our Planets set led the category of best designed commemorative, with 549 votes. The Classics Forever stamps pulled up in second place with 488 votes, closely followed by the National Parks set of 16, with 480 votes.

These are the same three stamp sets that claimed the top spots in voting for the overall best stamp, though in different positions.

Collectors chose the Service Cross Medals set of four forever stamps as the most important commemorative issue of 2016, with 634 votes. That issue was followed by the National Parks set with 560 votes, and the Repeal of the Stamp Act single-stamp issue, with 250 votes.

Votes for worst design in the commemorative category were overwhelmingly cast for the World Stamp Show-NY 2016 set of two stamps, with 798. This is, in fact, the second year in a row that stamps for the international show were picked as the worst-designed commemoratives.

In the news story reporting results of the 2015 Linn’s U.S. Stamp Popularity Poll, it was noted that almost 23 percent of the votes for worst-designed commemoratives went to the World Stamp Show set. In the 2016 contest, that percentage increased to 38 percent.

The Star Trek set of four was voters’ second choice for worst design, with 477 votes, and the Wonder Woman set came in third with 164 votes.

Voters had more bad news for the Amazonian comic-book superhero and warrior princess known as Wonder Woman, however. With 805 votes, the stamp set honoring the character’s 75th anniversary was picked as the least necessary commemorative issue, attracting the highest individual vote total in any of this year’s stamp categories.

Though commemorative stamps took the top three spots in the overall favorite stamp voting, collectors also had opinions about the definitive and special stamps that were issued last year.

The Songbirds in Snow set of four stamps came in fourth in the overall favorite stamp voting, but it took first place in voting for the best design among definitive and special stamps in 2016, with 316 votes.

Third place in the best-designed definitive category went to the Soda Fountain Favorites set, with 187 votes.

Voters chose the Nativity forever stamp as the most important definitive or special stamp in 2016, with 377 votes. The Nativity stamp outpaced a field that included the runner-up U.S. Flag definitive, which earned 298 votes, and the third-place Moon stamp, which received 176 votes.

There wasn't much of a contest when it came to picking the worst design for definitive stamps, according to Linn's readers. The Colorful Celebrations set of 10 stamp ran away with that unfortunate title, collecting 529 votes, compared to 190 votes for the runner-up, the single-design Patriotic Spiral forever stamp. Third place was claimed by the USA Star stamp, a nondenominated coil issued for use by nonprofit organizations.

A slightly revised version of the USA Star stamp was issued Feb. 10, and will be eligible for voting in the 2017 Linn's U.S. Stamp Popularity Poll.

Readers weren't quite as decisive when it came to picking the least necessary definitive or special stamp, but the Soda Fountain Favorites set took that dubious distinction, with 298 votes. Coming in second was the Colorful Celebrations set, with 238 votes, and third place went to the Jack-o'-Lanterns set of four, which picked up 181 votes.

Linn's readers were invited to include comments with their ballots, and a number of them did so, providing background on the reasons they voted the way they did.

Mildred Barylski liked the designs of both the Classics Forever and the Colorful Celebrations stamps, and remarked that she had a hard time choosing just one issue in some categories. Her choice for favorite stamp was the Pets issue: “Those cute animals won out.”

Jim Havlena suggested that some U.S. stamps are lacking in vital information.

“My longtime complaint about many U.S. stamp issues is that there is little or no information shown on the stamp that would educate the public about the subject of the stamp,” Havlena wrote. “Example: As a birder, I know the name of each of the four birds that are depicted on the Songbirds in Snow issue. However, I would guess that very few folks know the names of all four, though some may know the names of one or two of the birds.”

Steven Maginnis observed that when he was 10 years old, the Postal Service was honoring historical figures and events instead of comic book characters.

“The wonder of the Wonder Woman stamps is why we needed them,” Maginnis wrote.

He also put in a plug for having the Literary Arts stamps fulfill the letter rate, as they did years ago, rather than the three-ounce rate, where “few people will see these stamps on mail.”

Several readers voiced admiration for the Classics Forever stamps. Maris Tirums wrote, “It’s ironic that the updated reproductions of U.S. stamps from the 1860s are so strikingly superior in quality of design to contemporary designs.”

Robert W. Martin, founder and director of Stamp Collecting Clubs for Kids in Hawaii, mailed in 63 youth ballots (plus two from adults), and wrote, “It was definitely a lot of fun for the children, and many of them for the first time saw how many different stamps were issued by the USPS last year.”

“When the votes are tabulated our club will give the person whose votes are most in line with the final tabulations a $10 gift certificate to be used at one of our auctions, mixture picks, or at our Mid-Cities Stamp Show in November.”

That sounds like a great way to keep the fun going.

Thanks to All Participants

Voting in Linn’s U.S. Stamp Popularity Poll for 2017 is scheduled to begin in December.